Beyond Sapulpa, Oklahoma, is a 30 mile stretch of Route 66 that meanders back and forth across the interstate through the small towns of Kellyville, Bristow, and Depew. 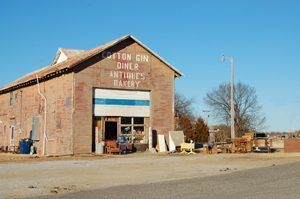 At one time, Kellyville boasted four cotton gins. This was the last building to survive. This old Route 66 icon stood for decades until it was razed in the Spring of 2011. Photo in January 2011, Kathy Weiser-Alexander.

Just eight miles southwest of Sapulpa is the community of Kellyville, population 1,150 today. The town first got its start in 1892 when a man named James E. Kelly leased a location from the Indian Agency in Muskogee and established a trading post southeast of Bakers Junction. The next year, Kelly made a deal with the St. Louis-San Francisco Railway to move the trading post and settlement near the railroad track east of Bakers Junction. In return, they would name the town after him.

Before long, Kelly built a large single-story wood frame building 3/4 of a mile north of his present location and moved his goods by wagon to the new building. His trading post thrived serving the Indians and white farmers of the area, and on November 27, 1893, a post office was established, with Kelly serving as the first postmaster.

The next business was a bank built by Huber Hughes in a stone building built across the street from the trading post. Then came a railroad depot, and before long, a cotton gin was constructed west of the railroad. Homes and other businesses followed in the community supported originally by agriculture and later supplemented by shallow oil wells in the area. By 1909, the town had grown to about 300 people and supported a bank, a cotton gin, a feed mill, a livery, and several other small businesses. In 1915, when oil and gas were discovered, several producers and a refinery located in the area, and the town grew even more.

In 1917, Kellyville became the site of the most tragic railroad accident ever to occur in Oklahoma. On September 28, 1917, a head-on collision between No. 407 of the St. Louis and San Francisco Railroad and an empty troop train returning from Fort Sill killed 32 people and injured more than 50 others, some of them seriously. 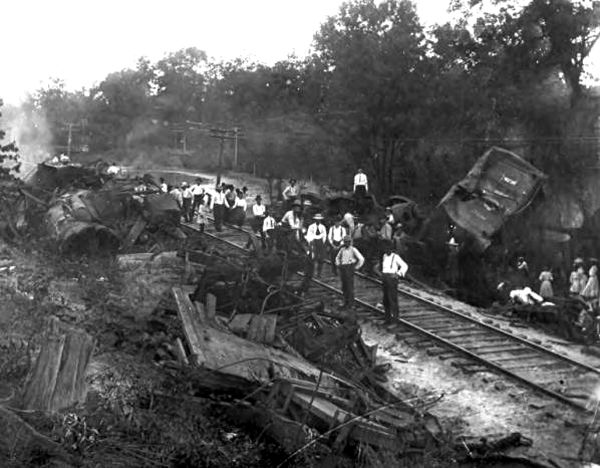 The collision, blamed on a misunderstanding of orders, was explained to have been due principally to the troop train running in two sections. No. 407, a passenger train, was en route from St. Louis, Missouri to Fort Sill, Oklahoma. In the meantime, the first section of the empty troop train had left Kellyville; however, the second section was still behind it. When the first section moved by, John Rule, engineer of the passenger train, started, thinking the entire train had passed. Two miles outside of Kellyville, he met the second section to the troop train just past the Polecat Creek railroad bridge.

Both trains were said to have been running at nearly top speed, and seeing the imminent impact, the crews of both engines jumped, saving their lives, although they sustained severe injuries. Upon colliding, the No. 407 passenger train’s mail car was driven up and over the entire length of the “Smoker” and “Jim Crow” cars, where most of the passengers were killed. Persons who saw the wreckage described the scene as one of awful horror. Mangled parts of the dead were seen everywhere,  while the injured made their way crawling on hands and knees to the nearby creek. All of the cars at this time were made of wood; had they been steel, there probably would have been no fatalities. The conductor and the engineman were found to be responsible for the error. At this time, in the midst of World War I, it had become difficult to hire satisfactory men into these positions. 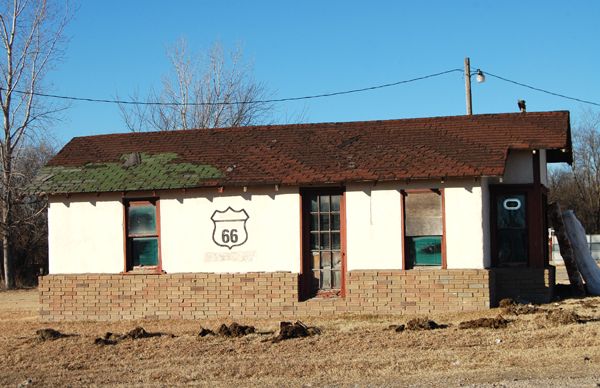 One of the few remnants left of Route 66 in Kellyville is this old diner. Unfortunately, it is closed today, Kathy Weiser-Alexander.

By 1919, the Kellyville boasted a refinery, a movie theater, a hotel, two restaurants, a feed mill, and telephone service. In 1926, Route 66 came through the community, providing a small boost to its economy.

Unfortunately, like many other financial institutions, the bank failed in 1929, and residents were forced to bank in nearby Sapulpa. The next year, when the first federal census was taken, the town reported 548 residents, four cotton gins, and six oil/gas companies. Ten years later, the population had risen to 647.

Over the next several decades, Kellyville continued to grow slowly. Most of the residents commute to Sapulpa or Tulsa for work. Many of the current residents and visitors enjoy outdoor activities at nearby Heyburn Lake.

On the east side of Kellyville were the remains of an old rock motel was torn down in 2007. The stone cabins served as an inspiration for the best-selling book Preposterous Papa, by Lewis Meyer, whose dad, Max, built the cabins. In the center of town, an old cotton gin continued to stand for decades until the Spring of 2011 when it was razed—unfortunately, another lost icon. The only remnant left of old Route 66 in this small town is an old building that once served as a diner.

As you roll along the road onwards to Bristow and Depew, watch to the northwest side of the road for glimpses of old Route 66. Some bits and pieces are drivable through here, but others make sudden stops where road closed signs block the way of travel at places where old bridges are long gone, or the road has been rendered over to Mother Nature. 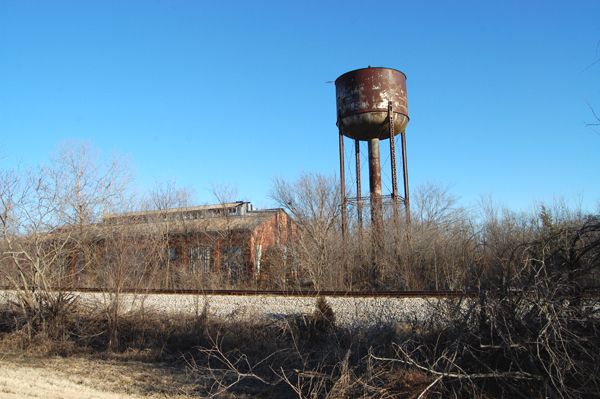 An abandoned factory between Kellyville and Bristow has seen better days, Kathy Weiser-Alexander.