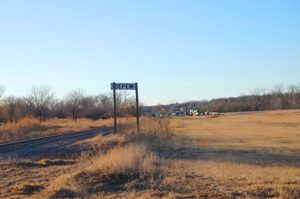 Some seven miles beyond Bristow, Oklahoma, Route 66 travelers heading west will arrive in the small hamlet of Depew, population about 480 people.

The area around Depew was originally within the Creek Nation, Indian Territory. However, in 1896, the Indians were assigned allotments of land and forced to give up the rest so that homesteaders could settle the region. The land which would later become Depew was first allotted to Creek Indian Lydia Barnett, who held title to approximately 115 acres, less than six acres reserved for the St. Louis and San Francisco Railroad. When the railroad came through in 1898, a small settlement known as Hall developed near the tracks. 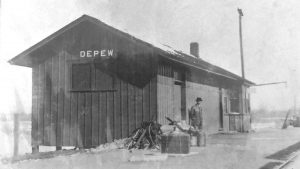 The town of Depew began after W. F. Malley, a Bristow citizen, was told about some prime land available that was filled with wildlife and surrounded by good timber. The St. Louis and San Francisco Railroad had already come through in 1898, and the land would be perfect for commercial use. Malley visited the site on January 15, 1901. Returning to Bristow the next day, he and a man named Henry W. Sims bought the property for $10 an acre.

On January 30, 1901, Mr. Malley drew up a petition for a post office, with the first recommendation for the town name being Depew after Chauncy M. Depew, a U. S. Senator from New York. Approval was received on May 17, 1901, and the post office opened the very same day. However, it would still be several years before an “official” town was begun. In June 1905, the town was platted by the Depew Investment Company, and town lots began to be sold. Shortly afterward, the first telephone company came to Depew. During 1905 and 1906, children were taught at a subscription school by Florance Atwell. When the first physician, Dr. O.S. Coppedge arrived from St. Louis, Missouri, crews were still removing stumps from Main Street. Dr. Coppedge purchased a small frame building on the corner of Main Street and opened his office and a drugstore.

When Oklahoma became a state in 1907, Depew began to grow. In its early years, Depew served primarily as an agricultural support center. The First State Bank opened in October 1907, and the first newspaper, the Depew Independent, was established in 1908 by W.C. Coop. It would operate until the late 1940s. In 1909 the population had grown to about 150  people, and a new public school was built. The first church in Depew was the Methodist Church. More businesses followed, including two cotton gins and a livery. 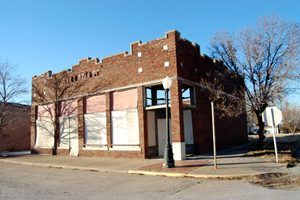 Dr. O.S. Coppedge was one of the first residents in Depew. He established an office and drug store. In 1920, he expanded into this brick building. Photo by Kathy Weiser-Alexander.

After oil was found near Depew in 1911, the town grew rapidly. By 1915, an oil field was developed, and the Sapulpa and Oil Fields Railroad constructed a line from Depew to Shamrock, another oil-boom town situated about 12 miles to the northwest. By 1920 Dr. O.S. Coppedge built a new modern brick building to house his drug store and office; a second bank — the Depew National Bank, was established just east of the new Coppedge Pharmacy, and two more cotton gins were built.

Up until this time, all the roads in and around Depew were still dirt, but when Route 66 began to be built, this would change. When completed in 1927, Depew was accessible by a paved highway. The route went right through town on top of the hill, bringing with it all manner of new travelers through the growing community. From 1925 to the 1930s, a very strong Chamber of Commerce also operated, boasting at its peak, 106 members. 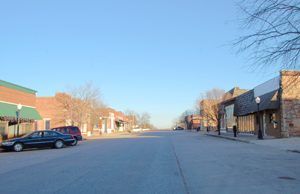 However, like so many other cities, Depew began to suffer from the arrival of the Great Depression in 1929. Unfortunately, the oil boom was waning at the same time. Depew reported a peak population of 1,126 in 1930. Over the next several decades, Depew suffered as many people left, businesses closed, the Chamber of Commerce folded, and even houses were moved out of town. By the late 1930s, there were only two grocery stores, one bank, one dry goods store, a hardware store, two service stations, and a few other businesses. By 1940, the population had fallen to 876. Twenty years later, it was worse, the town then supporting only 686 people.

Today, this picturesque small town of just about 550 people is, unfortunately, lined with empty business buildings testifying to more prosperous days; however, it still supports an elementary school and a high school. The vast majority of people are employed in jobs in Bristow and Sapulpa.

The town still boasts its original 1920’s Route 66 concrete running right through the center of town. There are also several historic buildings to be seen, including the old Coppedge Drug Store and the Gimmel Gas Station. Though small, Depew’s residents are proud of their history and heritage along the Mother Road. 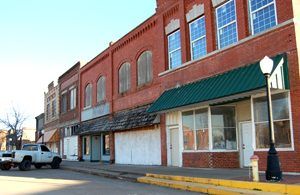 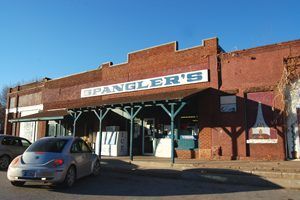 Spangler’s Grocery was still open when we came through in 2011. Unfortunately, it closed the next year.

Stop and give a hello to these friendly folks before continuing your journey down Route 66 for about 10 miles to Stroud, Oklahoma, a city with a hell-raising history.