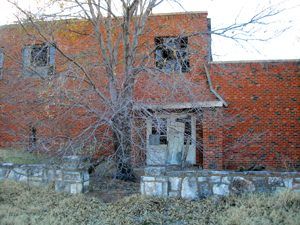 The Work Progress Administration built the brick school in Hext in the 1930s by Kathy Weiser-Alexander.

As you continue your Route 66 journey to the Texas line from Sayre, Oklahoma, you will pass by the ghost town of Hext, established in 1901. This farm and ranch community was never very big and only supported a post office for about a year and a half — June 4, 1901, to November 29, 1902. The town was named for William Hext, a local farmer. There was once a stone gas station here that was later converted into a home, and the pumps were removed. In fact, when Jack Rittenhouse wrote his Guidebook to Route 66 in 1946, he noted that Hext was “Not a community — just a gas station.” However, the town did sport a fairly large brick school that was built by the Work Progress Administration in the 1930s. The abandoned school still stands though deteriorating quickly.

Other abandoned and falling buildings can also be seen in the area, as well as several segments of original Route 66. The only building that is not abandoned is the Hext Baptist church. This stretch of old Route 66, between here and Erick, was the last in Oklahoma to lose its US 66 designation to superhighway I-40. 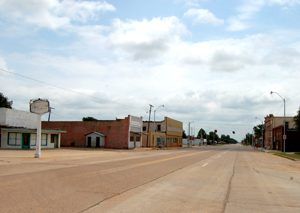 Erick, known as the “Gateway to Oklahoma,” was once the westernmost city of the state due to surveying disputes with Texas. Getting its start in 1900, the town was first called Dennis when a post office was established in February 1900. Primarily formed as a farm and ranch community,  the area was first known for the many cattle drives that passed through, stopping at old Salt Springs southwest of Erick. Nature’s gift to these early-day cattlemen, the fresh-water springs made an ideal stopping off place during the late nineteenth century.

Later, when the Choctaw, Oklahoma and Gulf Railroad line made plans to come through town, the Choctaw Townsite & Improvement Company filed an application for a townsite of 80 acres. The post office name was changed to Erick in November 1901 after Beeks Erick, one of the developers. The town incorporated the same year. Until Beckham County was created at 1907 statehood, Erick was located in northern Greer County.  At this time, Erick had a population of 686 people.

By 1909, the town boasted 13 general stores, two hardware stores, several cotton gins, blacksmith shops, a livery, a harness shop, and a lumber store. Food could be purchased at five meat markets, several grocery stores, a bakery, and a confectionary. The town supported two banks and two weekly newspapers — the Beckham County Democrat and the Erick Altruist, as well as three churches. In 1910, its population had grown to 915. By 1920, it boasted 971 people. That would change quickly when oil was discovered in the 1920s, quickly increasing the population to its peak of 2,231 in 1930. The town hoped to become another Oklahoma boomtown; however, these hopes were dashed when the oil was not a plentiful as they had hoped.

The 1930s brought in the Great Depression, the Dust Bowl, and another ugly incident when racial tensions exploded into violence. On July 14, 1930, the Frederick, Maryland Post published “Reports received here [Shamrock, Texas] by Sheriff W.K McLemore, Wheeler County, said negroes were driven out of Erick, Oklahoma last night and from Texola, Oklahoma today by a mob seeking reprisal for the death of Mrs. Harry Vaughn, wife of a farmer in a nearby county in Texas, who was beaten to death Friday by a Negro.”

The population dropped in the 1930s, but Erick persevered with six cotton gins, an ice factory, and entrepreneurs manufacturing salt from the nearby salt springs. At this time, there were 22 teachers in the schools who were serving 956 students.

In the early 1940s, several motor courts and other Route 66 services began to appear, including the DeLuxe Courts, and later, the Erick Court and Trailer Park, the Elms Garage, several restaurants, and gas stations. During this time, the town continued as an agricultural support center, and a mattress factory also came to the town. Jack Rittenhouse, in his 1946 Guidebook To Highway 66, would say of Erick:  “U.S. 66 crosses the one main street of the town, which is the first town you encounter, going west, which has any of the ‘true’ western look, with its wide, sun-baked street, frequent horsemen, occasional sidewalk awning, and similar touches.” In the meantime, the Chamber of Commerce printed a circular proclaiming Erick as “not a war spoiled town or just another boom town but, a town with a half-century of service.” 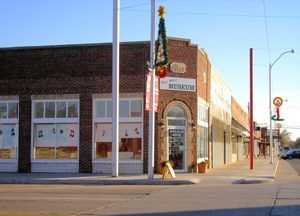 In 1980, Erick rebounded a little due to renewed oil and gas drilling, and the population increased to 1,375. Today, this small town is called home to some 1,052 people. Though Erick is far from a ghost town, many of its downtown brick buildings and businesses along Route 66 sit empty and silent, speaking of better days.

Erick was home to two of Country music’s popular performers. Sheb Wooley, the actor, songwriter, and singer who recorded the saga of the “one-eyed one-horned flying purple people eater” was born there in 1921. A street commemorates his name. Erick was also the boyhood home of Roger Miller, the late country music legend, Mr. “King of the Road” himself. The stretch of 4-lane that enters Erick from Sayre has been renamed Roger Miller Memorial Highway, and that part of Route 66 through town is called Roger Miller Boulevard. Further memorializing Mr. Miller is the 3000 square foot Roger Miller Museum opened at the corner of US 66 (Roger Miller Boulevard) and Sheb Wooley Avenue, which opened in 2004 in a former 1929 café and drugstore building. At one point, when an interviewer asked Roger Miller where Erick was, Miller wryly replied, “It’s close to extinction.” 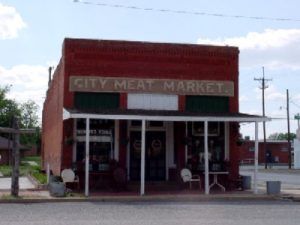 The Old City Meat Market before it became a popular stop on 66 as the Sandhill Curiosity Shop.

While in Erick, be sure to visit the 100th Meridian Museum, situated in the former First National Bank Building, which is filled with artifacts from prehistoric times to present. Just one block south of Route 66 is the old City Meat Market, Erick’s oldest building, which now houses the Sandhill Curiosity Shop, a must stop as you travel through!  Nothings for sale, but Harley Russell will entertain and let you look at thousands of memorabilia.  Afterward, sate your appetite at the Rafter T Restaurant, formerly known as Cal’s Country Kitchen and serving up customers since 1946.

Many of the original Route 66 businesses are now gone or have been converted to other uses. However, many of these old places still stand a make for great photo opportunities.

Five blocks west of the town’s main intersection, the West Winds Motel occupied the north side of Route 66, a location with the commercial advantage of visibility for the westbound traveler. A neon sign flashed the name of the motel beneath a painting of a bucking bronco. Faded today, the sign with its head-down-heels-up horse and his tenacious rider is still visible. Motor courts like the West Winds Motel generally consisted of individual guest cottages or multiple-unit guest buildings with continuous facades, often with attached garages; and office and owner-residence building; and perhaps a coffee house; arranged around a central open space. At the West Winds, an office and two multi-unit buildings set at right angles form the courtyard. A gravel loop once outlined the U-shaped central public space, giving the motel two street entrances. Until 2002, a rusting children’s swing set, evidence of the prosperous post-war years when families stayed at the West Winds, still stood windblown and creaking in the courtyard.

The West Wind’s stone-and-stucco construction, linear buildings, courtyard, and Mission style invoke a Spanish hacienda. The motel’s name ties it to a time in history when the West had captured the imagination of much of the United States. Because of its historic significance, the National Park Service listed the motel in the National Register of Historic Places in 2004. Some efforts have been made to restore the property, but it remains closed to visitors today. The old motel is located at 623 Roger Miller Blvd. 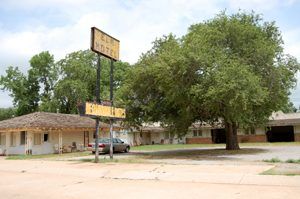 Just down the block was yet another popular tourist court, complete with garages — the old Elm Motel. The Elm was opened in the 1940s by Richard and Mini Glover. They didn’t keep it long and sold it in 1948 to Howard and Louise Kinsington, who added a swimming pool and miniature golf course to encourage longer stays. The ‘Elm Motel’ closed when Erick was bypassed by I-40. It is located at 823 W Roger Miller Blvd.

Between Erick and the nearby ghost town of Texola, the prairie stretches out beyond the old Mother Road that is beginning to get overgrown from its lack of use.

Texola was born in 1901 and sits near the 100th Meridian. For this reason, the town has been surveyed eight different times over the years, and many of its residents have lived in both Oklahoma and Texas over the years, without ever having moved. In its earliest days, the people of the town had a hard time figuring out what to call it, changing the name from Texokla to Texoma, and Texola. Finally, a town election chose its permanent name when the post office was established in December 1901. Originally, Texola was located in northern Greer County before Beckham County was created at 1907 statehood. Texola developed along the Choctaw, Oklahoma and Gulf Railroad line built through the town in 1902. That same year, a newspaper was established called the Texola Herald, which would continue to be published until about 1921.

By 1909 the local agricultural area supported Texola’s two cotton gins and its corn and grist mill. The economy sustained a bank, several general stores, a hardware store, a meat market, a blacksmith shop, a livery, three hotels, and two restaurants. Residents of the community had also organized three churches. In 1910, the town supported some 361 people; however, ten years later, in 1920, the population had dropped to 298. 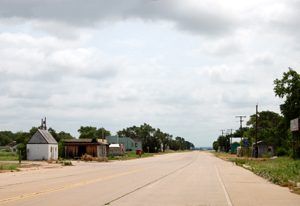 In 1930, Texola’s population peaked at 581, and during this decade, cotton production increased, and two more cotton gins were built. The town also built a large auditorium which would seat up to 300 people. The Great Depression and the Dust Bowl, however, began to drive people away, and the population declined. In 1940, Texola was called home to just 337 people. By 1990, it had just 45 people, and, today, the number is in the single digits.

Texola is clearly a ghost town today, as evidenced by its lack of business and abandoned buildings. However, there are numerous photo opportunities in this old town, such as the restored Magnolia Service Station, which was listed in the National Register of Historic Places in 1995, the old territorial jail built in 1910, several abandoned businesses, and an interesting old bar on the western edge of town that boldly makes the statement on the side of its building, “There’s no other place like this place anywhere near this place so this must be the place.” 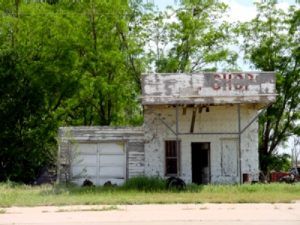 Texola is situated on old Route 66, one mile east of the Oklahoma-Texas border.

Continue your journey onto the staked plains of the Texas Panhandle.