Stroud, Oklahoma, was founded in 1892 and named for trader James Stroud. This small town began by selling whiskey to the many cowboys and travelers escaping nearby “dry” Indian Territory. Thirsty for a drink, the town soon boasted nine saloons and became a wild “hell-raising” town, as cattlemen relaxed after days on the range with their herds. By 1900, the town was called home to 800 people. Stroud’s wild party days soon came to an end when Oklahoma Statehood forced the town “dry” in 190, at which time its population was 1,312.

During the first decade of the 20th Century, Stroud’s economy was based on cotton farming. By 1909, the community supported two banks, two newspapers, four cotton gins, and a cottonseed-oil mill. But in 1910, the population declined to 1,220.

Though its wild party days might have been over, Stroud had not yet seen the end of its Wild West days. On March 27, 1915, Stroud became the victim of one of the last outlaw robberies in Oklahoma when Cherokee Bad Boy, Henry Starr, chose two of the town’s banks for a historic double daylight heist. 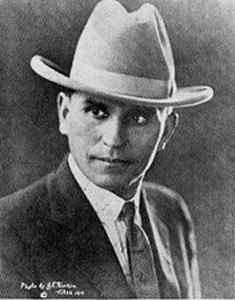 Along with six other men, Henry Starr decided to rob two banks simultaneously, much as the Dalton Gang had unsuccessfully tried to do in Coffeyville, Kansas, in 1892. The Stroud, Oklahoma robbery would prove almost as disastrous for Henry Starr. Proceeding to rob the Stroud National Bank and the First National Bank, word of the holdup spread quickly, and the citizens took up arms against the bandits. Henry and another outlaw named Lewis Estes were wounded and captured in the gun battle. The rest of the gang escaped with $5815, thus pulling off a double daylight bank robbery.

Starr was tried and sentenced for the robbery and transferred to the Oklahoma State Penitentiary at McAlester. However, just four years later, he was paroled. In February 1921, Henry died as he had lived, in a violent manner, after being shot during a robbery in Harrison, Arkansas.

Finally, Stroud settled down to a sleepy little town that made its living primarily from agriculture and oil. However, when Route 66 came through town, Stroud responded like hundreds of other small towns, with services popping up which provided all manner of amenities to the many travelers of the Mother Road.

One such business that still thrives today is the Rock Café, a Route 66 icon. The café, an inspiration of a man named Roy Rieves, began in 1936. After Roy had saved his money for most of his life, he spent his retirement by starting the popular restaurant when he bought several business lots skirting the city limits of Stroud. 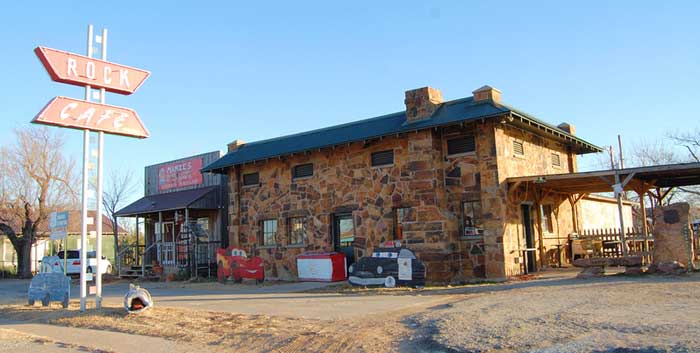 Rock Cafe in Stroud has been serving folks since August 4, 1939

At the time, Route 66 was finishing pavement in a nationwide effort to connect the east coast to the west coast, and business was booming along the highway. Roy built the café almost single-handedly over the next three years, using the rocks removed from the old road while paving Route 66.

Finally finished, the Rock Café opened on August 4, 1939, run by Miss Thelma Holloway, and instantly succeeded. Before long, the café became a Greyhound bus stop, bringing even more travelers into the thriving restaurant.

Though Roy retained ownership of the building, he never ran the café, which had a series of managers until 1959 when Mamie Mayfield began to run the restaurant. Keeping the café open 24 hours a day, Mamie ran the business for almost 25 years. However, by the early 1980s, business had declined badly with the coming of the Turner Turnpike, and Mamie was nearing the age of 70. Finally, in 1983, she closed the Rock Café. 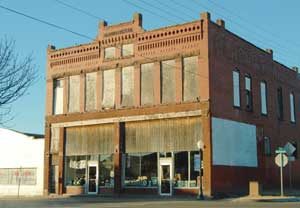 Now listed on the National Register of Historic Places, the Rock Cafe was revived in 1993 by Dawn Welch and is still serving home cooking to Route 66 travelers today. The only hiccup in its long tenure was from May 2008 to May 2009, when a fire gutted the structure except for its rock walls. However, Welch hired a historically-minded contractor who rebuilt the restaurant better than ever.

Stroud was devastated by the 1999 Oklahoma tornado outbreak, which destroyed the town’s 53-store Tanger Outlet Center and a distribution center owned by foodservice company Sygma. Neither of these facilities was rebuilt, resulting in the loss of 800 jobs, which caused significant economic distress to the town.

Dawn Welch, the owner of the Rock Cafe, served as the inspiration for the Sally Carrera character in the 2006 Disney-Pixar animated movie “Cars.” A crew from Pixar, researching Route 66 for the film in 2001, stopped for dinner at the Rock Cafe and met Welch. 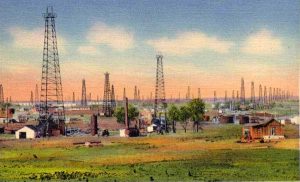 Stroud’s population peaked at 3,148 in 1980. Though the population has fallen since to about 2,700 people today, Stroud is currently enjoying increased economic activity in the oil and gas sectors and is home to Service King, a manufacturer of oilfield workover rigs. Renewed interest in Route 66, and Stroud’s strategic location as the center point between Oklahoma City and Tulsa, also contribute to the town’s success.

While in Stroud, you can also see the Skyliner Motel at 717 N Main Street (Route 66) as well as several historical buildings, including the Graham Hotel at Main and 2nd Avenue, the Hotel Lincoln at 232 Main, the James W. Stroud House at 110 East 2nd Avenue, and the Joseph Carpenter House, which is the oldest and best-preserved prairie style house in Stroud at 204 W 6th Street.

The headquarters of the Sac & Fox Indian Nation is located in Stroud. The tribe provides an annual summer pow-wow. In addition, the City of Stroud promotes several annual events such as the Route 66 Wine and Food Festival and more.

Route 66 continues just about seven miles to the southwest to the small town of Davenport, Oklahoma. 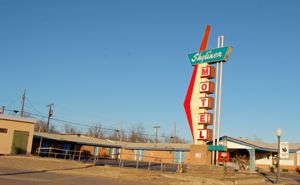