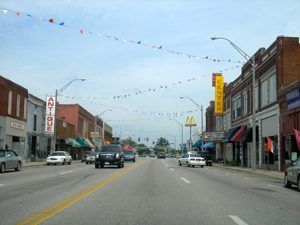 Where the golden prairies meet the foothills of the Ozarks is nestled Vinita, Oklahoma, the second oldest town in the state. Established in 1871, when two railroads, the Atlantic & Pacific, and the Missouri–Kansas–Texas, were extended to the area, it was first called Downingville. Later the town’s name was changed to Vinita, in honor of Vinnie Ream, the sculptress who created the life-size statue of Abraham Lincoln at the United States Capitol.

During these early days, Vinita grew fast and many fine homes and buildings were built, many of which continue to stand today. Several of these homes had electricity in those early days as Vinita was the first town in Oklahoma to establish the new service. During the days when railroad travel was glamorous, Vinita became home to one of the many popular Harvey House Restaurants. Unfortunately, there is no sign of the Harvey House today.

In the 1920s the Center 3 Theatre was built, one of the earliest in the state. Today, it continues to operate, offering first-run movies to residents and visitors alike. 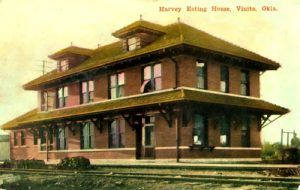 Called “America’s Crossroads,” the term is fitting as Route 66, Interstate 44, U.S. Highways 69 and 60, and State Highway 2 bring travelers and motor freight carriers to the town. In addition, Vinita continues to be an intersection point for the Burlington Northern and Union Pacific Railroads.

There are several historic buildings in Vinita from the time before Route 66, including the Craig County Courthouse and the Hotel Vinita. Mother Road icons are also plentiful in this fine city. Be sure to check out the many examples of art deco in downtown Vinita. If you’re looking for a bite to eat, Clanton’s Cafe is the oldest continuously run family-owned restaurant on Route 66 in Oklahoma. Serving a variety of home-cooked meals, the chicken fried steak is said to be one of the best in the nation.

Other points of interest include the Little Cabin Pecan Company (now defunct), the Eastern Trails Museum, and the nation’s largest McDonalds, which straddles the Will Rogers Turnpike. This monstrous structure, spanning the four-lane highway, is almost 30,000 square feet. An interesting note, of which not many are aware, is that this tribute to the “fast-food world” was not always so. Before McDonalds took over the interstate, this was home to a restaurant called the Glass House. Though a McDonalds still stands at this site, unfortunately, the McDonalds Facade was removed several years ago, and now it’s just a bland overpass structure. 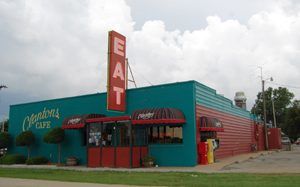 Clanton’s Café in Vinita, Oklahoma has been cookin’ up fine chicken-fried steaks since 1927, Kathy Weiser-Alexander. 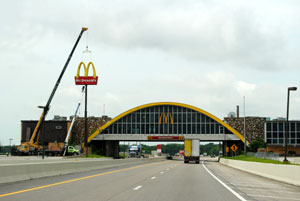 This city of approximately 6,500 residents is a great place to visit as you roam its historic places and visit with its friendly people before heading on down the Mother Road to the small towns of White Oak, Chelsea, and Foyil, where a great side trip presents itself at Ed Galloway’s Totem Pole Park.