The Blue Whale in Catoosa, Oklahoma has long been an icon on Route 66. Photo by David Fisk.

Catoosa, Oklahoma, located on Route 66 in the northeastern part of the state is home to the Tulsa Port of Catoosa and the famous Blue Whale landmark that has long been a favorite among travelers of Route 66.

In the 19th century, the Cherokee Nation controlled this area, but white settlement began after the Atlantic and Pacific Railroad laid its tracks in the early 1880s. A settlement soon began that took its name from a nearby hill. With the establishment of William Halsell’s Bird Creek Ranch and other area cattlemen, the community soon became a prominent cow town, busily shipping cattle to the east. In 1883, a post office was established.

During these early years, the town was called home to Bluford “Blue” Duck, an infamous outlaw who was allegedly involved with a lady desperado from Missouri named Belle Starr. He was arrested for killing a man and sentenced by Judge Isaac Parker to be hanged in July 1886. However, his sentence was appealed and he was sent to prison. He is buried in the Dick Duck Cemetery near Catoosa.

By 1900, the town had grown to 241 people, at which time, it boasted six general stores, two doctors, three drugstores, two blacksmiths, a hotel, a number of livestock dealers, a lumberyard, and a lawyer. By 1910, the population of the community had almost doubled and had added a grain elevator, a cotton gin and mill, a marble works, and some coal mines. Early newspapers included the Catoosan, the Catoosa Courier, and the Catoosa Star.

The town continued to thrive with coal mining, agriculture, oil, and natural gas production. In 1926, Route 66 was built through the area and businesses sprouted up to serve travelers along the new highway. At this time, the meandering course between Claremore and Catoosa crossed the Verdigris River on a steel truss bridge, that was found to be too narrow, so the Bird Creek Bridge was built in 1936. 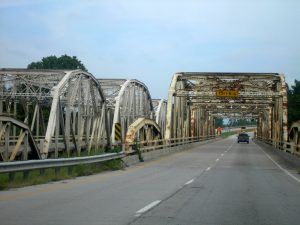 In the 1940s and 1950s many of the community’s businesses, such as the Catoosa Indian Trading Post, catered to travelers on Route 66.

In 1957, Route 66 had become a four-lane highway, and a second bridge, serving eastbound traffic was added across the Verdigris River. The 1936 bridge became the westbound bridge. Though they were mismatched, they became known as the Twin Bridges but were dubbed “Felix” and “Oscar” by locals.

In 1971, the Tulsa Port of Catoosa opened and gave the town an economic boom, which continues to this day. The port connects to the Mississippi River and the Gulf of Mexico via the McClellan-Kerr Arkansas River Navigation System. The port’s 2,000-acre industrial park continues to provide numerous jobs in the area. This inland seaport town is the furthest inland seaport in the United States. Today, it offers year-round, ice-free barge service with river flow levels controlled by the U.S. Army Corps of Engineers. 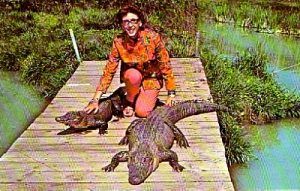 Just beyond the Verdigris River bridges, a new Route 66 attraction was established in Catoosa in the early 1970s, which soon became one of the most recognizable sites on route 66. The Blue Whale attraction was built by Hugh Davis as an anniversary gift to his wife Zelta, who collected whale figurines. Hugh and Zelta had over 40 years of zoological experience when Hugh built the 80 foot long grinning Blue Whale.

Hugh, who had retired by that time, owned the land on which the attraction was built and surprised Zelta with the massive project for which she had no idea. Originally, the pond surrounding the massive Blue Whale was spring-fed and was intended only for family use. However, as many locals began to sneak in to enjoy its cool waters, Davis brought in tons of sand, built picnic tables, hired lifeguards, and opened his masterpiece to the public. 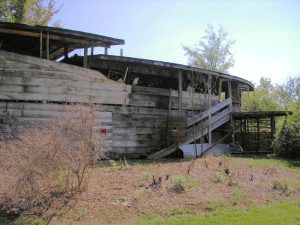 Originally called Nature’s Acres, Hugh continued to build the attraction until it eventually included the Fun and Swim Blue Whale and the A.R.K. (Animal Reptile Kingdom). The attraction also featured Hugh’s brother-in-law, Indian Chief Wolf Robe Hunt, a full-blooded Acoma Indian, who was famous, in his own right, for his Indian paintings, and as a highly skilled silversmith. Chief Wolf-Robe Hunt once ran the Arrowood Trading post across the highway from the Blue Whale attraction.

In no time at all, its pond, giant Blue Whale, and zoo, housed in a wooden ark, attracted both locals and travelers alike. Children flocked to slide down the tail of the large Blue Whale into the cool waters of the pond, as families enjoyed the picnic tables, concessions, and boats provided at Nature’s Acres.

In 1988, the aging couple found that they could no longer handle the management of the attraction and it was closed. Just two years later, Mr. Davis died. The park soon fell into disrepair, crumbling from neglect and weather. 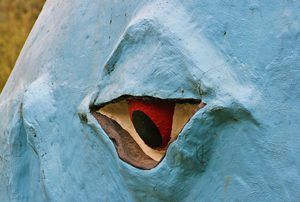 However, in the early 2000s, Blaine Davis, a son of Hugh and Zelta Davis became a part-time caretaker of his parent’s property, and it reopened. A few years later, a large group of volunteers from the Hampton Inn hotel chain pitched in to help clean the grounds. A local volunteer group, Fins of the Blue Whale, formed in 2009 and began long-term efforts to improve the grounds — including plans to eventually renovate and reopen The A.R.K. as a museum. In the summer of  2011, the Blue Whale was given a fresh coat of paint thanks to the donation of time and effort by the Bill Haynes Company of Tulsa.

In the meantime, the Twin Bridges across the Verdigris River, which had long become a photo op for Route 66 travelers, changed in August 2011. At that time, the State of Oklahoma was forced to remove and replace the 1936 bridge due to its state of disrepair. Afterward, the Oklahoma Department of Transportation repainted the remaining bridge and a portion of the historic bridge was moved to the entrance to the nearby Molly’s Landing restaurant, just west of the old bridge site. Other large pieces of the bridge can be found at Rogers Point Park, on the east side of the river near the bridge site.

Today, Catoosa is primarily a bedroom community for Tulsa commuters but is still called home to about 7,150 people.

The old Arrowood Trading Post continues to stand just across the highway from the Blue Whale. The Hard Rock Casino (formerly Cherokee Casino and Resort), operated by the Cherokee Nation, is also located in Catoosa. It includes two hotels, several restaurants, a golf course, a concert hall called “The Joint”, and hosts the annual Cherokee Art Market as well as the International Cherokee Film Festival. The Catoosa Historical Musem, a replica of an old train depot, is home to many Catoosa artifacts and railroad memorabilia. The D.W. Correll Museum houses rare antique automobiles, vintage whiskey bottles, and a vast collection of rocks and minerals from all over the world.

Route 66 travelers will continue their journey for just about 14 miles before reaching Tulsa. 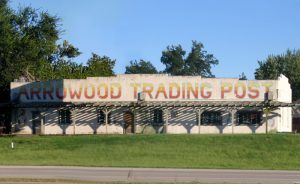 Arrowood Trading Post across the road from the Blue Whale in Catoosa, Oklahoma, courtesy Wikipedia.