Listed on the National Register of Historic Places and claiming the title of the World’s Largest Concrete Totem Pole, Ed Galloway’s Totem Pole Park features a 90-foot totem pole that towers over the park in a vivid array of folk art colors. 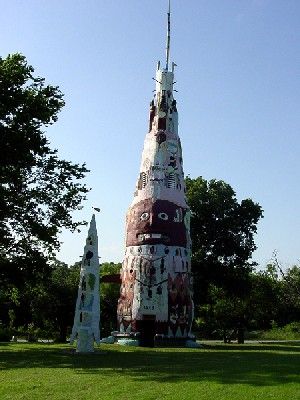 Ed Galloway built the totem pole over an 11 year period from 1937 to 1948, utilizing some 28 tons of cement, six tons of steel, and 100 tons of sand and rock. His tribute to the American Indian features 200 carved pictures, with four nine-foot Indians near the top each representing a different tribe.

The centerpiece totem pole, rising from the back of an enormous turtle, sits in the midst of a beautiful nine-acre park. The park also features Galloway’s eleven-sided “Fiddle House” that previously housed his hand-carved fiddles. Artifacts made by Ed Galloway and visuals of the park development are also on display in the museum. Throughout the park are numerous colorful totems that display a variety of Indian Folk Art.

Nathan Edward Galloway was born in 1880 in Missouri and developed his carving skills as a child, creating mother-of-pearl buttons and small wooden items.  After serving in the U.S. Army in the early 1900s he was introduced to Japanese and Far Eastern art while stationed in the Philippine Islands. After he returned to Missouri from his tour of duty, he began to create massive sculptures from tree trunks where he incorporated human figures with fish and reptiles.

Galloway’s unique style soon caught the eye of Sand Springs founder and philanthropist Charles Page in 1914. The discovery led to a long relationship between the two, beginning with Galloway’s employment as a manual arts instructor at the Sand Springs Home. He spent the next 20 years teaching boys woodworking in the Children Home orphanage in Sand Springs, Oklahoma. In 1937, he retired to the property where the park sits today in Foyil, Oklahoma.

Working mostly by himself, the totem pole and other sculptures in the park kept him busy during his retirement years all the way up until the time of his death in 1962. Every day he rose at 5:00 a.m. and continued to work on his elaborate pieces until past sunset. 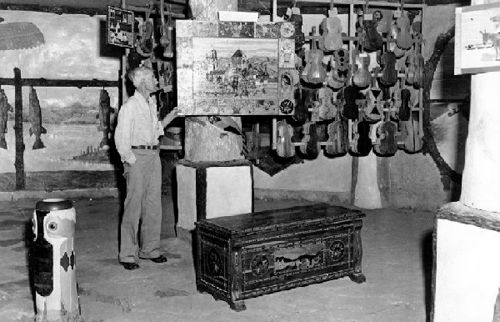 Ed Galloway in his Fiddle House

Ed also built the Fiddle House, supported inside and out by 25 concrete Totem Poles, to display his numerous handmade fiddles. After his death in 1962, the sculptures began to fall into disrepair from weather and neglect. Unfortunately, many of the fiddles were stolen from the Fiddle House in 1970 and were never recovered.

However, in the 1990s, a restoration effort was undertaken by the Kansas Grassroots Art Association whose members live near Lawrence, Kansas. Members of the group painted the totems during Labor Day and Memorial Day weekends over a seven-year period.

The park is now owned and operated by the Rogers County Historical Society and the Foyil Heritage Association assists with fundraising and yard maintenance.

Picnic areas can be enjoyed by travelers on the beautifully kept grounds during daylight hours. The Fiddle House Museum and Gift Shop are open daily from 11:00 a.m. to 3:00 p.m. and Sundays from 12:30 p.m. to 4:00 p.m. 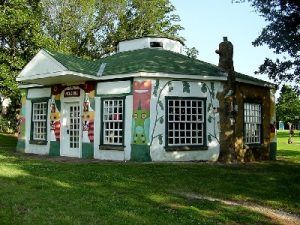 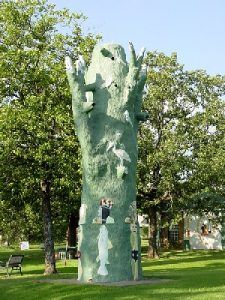 Another totem pole in the park,  Kathy Weiser-Alexander.

The park is located ten miles north of Claremore, Oklahoma, off historic Route 66 highway and four miles east of Foyil on highway 28A.