By Frederick Ritchie Bechdolt in 1922

From the time when the first lean and bearded horsemen in their garments of fringed buckskin rode out into the savage West, men gave the same excuse for traveling that hard road toward the setting sun.

The early pathfinders maintained there must be all manner of high-priced furs out there beyond the skyline. The emigrants who followed in the days of ’49 informed their neighbors that they were going to gather golden nuggets in California. The teamsters who drove the heavy freight-wagons over the new trails a few years later told their relatives and friends that they were going West to better their fortunes. And, when the Concord coaches came to carry the mail between the frontier settlements and San Francisco, the men of wealth who financed the different lines announced there was big money in the ventures; the men of action who operated them claimed that high wages brought them into it.

So now you see them all: pathfinder, Argonaut, teamster, stage driver, Pony Express rider, and capitalist, easing their consciences and soothing away the trepidations of their women-folk with the good old American excuse that they were going to make money.

As a matter of fact, that excuse was only an excuse and nothing more. In their inmost hearts, all these men knew that they had other motives.

There was one individual who did not try to hoodwink himself or others about this Western business. This man, as well as many of the others, had an itching which was troubling all the rest of them. That Individual asserted loudly, and with lamentations, that the spirit of adventure was blazing within him; he wanted to go out West to fight Indians and desperadoes. He was hot with the lust for adventure. The men of action wanted to risk their lives, and the men of wealth wanted to risk their dollars. This does not imply that the latter element was anxious to lose those dollars any more than it implies that the former expected to lose their lives. But, both were eager for the hazard.

All of them dreamed dreams and saw visions. And the dreams were realized; the visions became actualities. Few of them justified their excuse of money-making; many came out of the adventure poorer in this world’s goods than when they went into it. But, every man of them had the time of his life and lived out his days with a wealth of memories more precious than gold; memories of a man’s part in a great rough drama.

The Winning of the West, that drama has been called. Perhaps no act in the play attained the heights which were reached by the last one before the coming of the railroad, the one with which this story has to deal, wherein bold men allied themselves on different sides to get the contract of carrying the mails by stage-coaches on schedule time across the wilderness.

In the beginning, there was a frontier 200 miles or so west of the Mississippi River. Behind that frontier wide-stacked wood-burning locomotives were drawing long trains on tracks of steel; steamers came sighing up and down the muddy rivers; cities smeared the sky with clouds of coal smoke; under those sooty palls, men in high hats and women in enormous hoop-skirts passed in afternoon promenade down the sidewalks; newspapers displayed the day’s tidings in black headlines; the telegraph flashed messages from one end of that land to the other; and where the sharp church steeple of the most remote village cut the sky, the people read and thought and talked the same things which were being discussed in Delmonico at the same hour.

Beyond the Sierra Nevadas, there was another civilization. In San Francisco, hotel lobbies men and women passed and re-passed one another dressed in Eastern fashions — some months late, but Eastern fashions none the less. Newspapers proclaimed the latest tidings from the East in large type. Men were falling out over the same political issues which embroiled men by the Atlantic seaboard; they were embarking in the same sort of business ventures.

But, 2,000 miles of wilderness separated these two portions of the nation. That vast expanse of prairies as level as the sea, of sagebrush plains, of snow-capped mountains and silent, deadly deserts, was made more difficult by bands of hostile Indians. 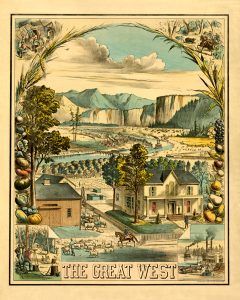 The Great West by Gaylord Watson, 1881

In Europe such an interval would have remained for centuries, to be spanned by the slow migration of those whom ill-fortune and bad government had driven from the more crowded communities on each side. During that time these two civilizations would have gone on in their own ways developing their own distinct customs until, in the end, they would have become separate countries.

But, the people east of the Mississippi River and the people west of the Sierras were Americans, and the desire for a close union was strong within them. Their business habits were such that they could not carry on commercial affairs without it. Their political beliefs and their social tendencies kept them chafing for it. And furthermore, it was their characteristic not to acknowledge nature’s obstacles as permanent. Two thousand miles of wild prairie, mountain ranges, and deserts simply meant a task, the more blithely to be undertaken because it was made hazardous by the presence of hostile Indians.

So now the East began to cry to the West and the West to the East, each voicing a desire for quicker communication, and to get letters from New York to San Francisco in fast time became one of the problems of the day.

The first step toward a solution was the choice of a route, and while this was up to Washington, the proof on which it rested was up to the men of wealth and the men of action. Immediately two rival groups began striving, each to prove that its route was the quickest. Russell, Majors & Waddell, who held large freighting contracts on the northern road, from Independence, Missouri, via Salt Lake City to Sacramento, California bent their energies to demonstrating its practicability; the Wells-Butterfield stage and expressmen undertook to show that the longer pathway from St. Louis by way of the Southwestern territories to San Francisco was best.

In 1855, Senator W. M. Gwin of California, who had conceived the idea with F. B. Ficklin, general superintendent of the Russell, Majors & Waddell Co., introduced a bill in Congress for bringing the mails by horseback on the northern route, but the measure was pigeonholed. Snow in the mountains was the main argument against it.

In 1857 James E. Birch got the contract for carrying a semi-monthly mail from San Antonio, Texas, to San Diego, California and the southern route’s champions had the opportunity to prove their contention.

Save for a few brief stretches in Texas and Arizona there was no wagon road and El Paso and Tucson were the only towns between them. A few far-flung military outposts, whose troops of dragoons were having a hard time holding their own against the Comanche and Apache, afforded the only semblance of protection from the Indians.

Horsemen carried the first mail-sacks across this wilderness of dark mountains and flaming deserts. On that initial trip, Silas St. Johns and Charles Mason rode side by side over the stretch from Carrizo Creek in Texas to Jaeger’s Ferry, where Yuma, Arizona stands today. That ride took them straight through the Imperial Valley. The waters of the Colorado River, which have made the region famous for its rich crops, had not been diverted in those days. It was the hottest desert in North America; sandhills and blinding alkali flats, and only one tepid spring in the whole distance. One hundred and ten miles and the two horsemen made it in 32 hours.

The company now began to prepare the way for stagecoaches. During the latter part of November, St. Johns and two companions drove a herd of stock from Jaeger’s Ferry to Maricopa Wells. The latter point had been selected for a relay station because of water and the presence of the friendly Pima and Maricopa Indians, who kept the Apache at a distance. During that drive of about 200 miles, the pack mule lost his load one night in the desert. The men went without food for three days, and for 36 hours traveled without a drop of water in their canteens.