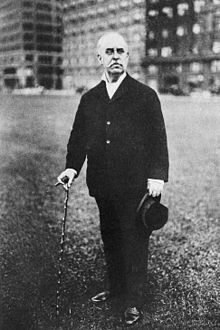 When Pony Bob Haslam was buried in Chicago, Illinois, 52 years had passed since the Pony Express first ran. He was 1,700 miles away from his old home station. For the last six years of his life, he had toiled as a clerk at the Congress Hotel.

Still, when he died, the newspapers of the day printed glowing tributes. “Pony Bob Haslam, Who Knew No Fear, Dies in Chicago — a man once famous throughout the United States for his courage, endurance, and skill.”

“Pony Bob,” by which name he is most famous, was a Pony Express rider in the Old West and credited with making the longest uninterrupted ride during the brief duration of the Pony Express. He was born in London, England in 1840 and as a teen, immigrated to the United States. He made his way to Salt Lake City, Utah where he worked on a ranch and as a government messenger. He was at home on a horse. He was loyal, brave, and committed to getting the job done. Pony Bob fit the model for what a Pony Express rider should be.

In 1860, he was 20 years old when he was hired by Bolivar Roberts, a Pony Express Division Superintendent in Carson City, Nevada. He helped build the stations and was assigned the run from Friday’s Station (State Line) to Bucklands Station near Fort Churchill, 75 miles to the east.

Haslam is credited with having made the longest round trip ride of the Pony Express. He received the eastbound mail at Friday’s Station during a time when the Paiute Indians were on the warpath. Area residents were frantically working to fortify their property against war parties whose signal fires were blazing on every peak for a hundred miles. When he arrived at the Carson River, 60 miles away, he found that the settlers had seized all the horses at the station for use in the campaign against the Indians.

He went on without a relay down the Carson River to Buckland’s Station 15 miles farther. Here, his relief rider was so badly frightened over the Indian threat that he refused to take the mail. Within ten minutes Pony Bob was in the saddle again. He rode 35 miles to the Carson Sink; got a fresh horse and made the next 30 miles, without a drop of water; changed at Sand Springs and again at Cold Springs; and after 190 miles in the saddle, turned the pouches over to J. G. Kelley at Smith’s Creek.

After a rest of nine hours, he retraced his route with the westbound mail. At Cold Springs he found that Indians had raided the place, killing the station keeper and driving off the horses. It was growing dark. He rode his jaded animal across the 37-mile interval to Sand Springs, got a remount, and pressed on to the sink of the Carson River. Afterward, it was found that during the night he had ridden straight through a ring of Indians who were headed in the same direction in which he was going. Finally, he reached Buckland’s Station, without a mishap and within four hours of the scheduled time. The 380-mile round trip we the longest on record for the Pony Express. 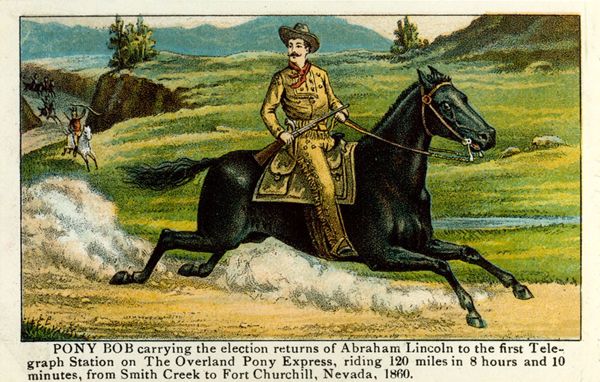 Perhaps his greatest ride, 120 miles in 8 hours and 20 minutes while wounded, was his most important contribution and the fastest trip ever made by the Pony Express. The message carried was Abraham Lincoln’s Inaugural Address.

Although the Pony Express proved that the central/northern mail route was viable, its owner, Russell, Majors, and Waddell did not get the contract to deliver mail over the route and its brief existence ended in October 1861. Afterward, Haslam went to work for Wells, Fargo & Company, which operated its own enterprise between San Francisco, California and Virginia City, Nevada. When the telegraph reached Virginia City, Wells-Fargo sent him to Idaho to ride an express route. Finally, he moved freight between Salt Lake City and Denver, Colorado. He also scouted for the U.S. Army, served as a Deputy United States Marshal in Salt Lake City, Utah, and accompanied his good friend Buffalo Bill Cody on a diplomatic mission to negotiate the surrender of Chief Sitting Bull in December 1890.

In his final years, he worked in the Congress Hotel in Chicago, Illinois where he made a personal business card with a sketch of himself as a Pony Express rider at the age of 20 and entertained guests with stories of his adventures. He drifted in and out of public mention but eventually died in Chicago on February 29, 1912, after having suffered a stroke. He was 72 years old.

It was widely reported that Buffalo Bill paid for Pony Bob’s headstone at Mount Greenwood Cemetery in Chicago; however, business records indicate it was paid for by a family member. 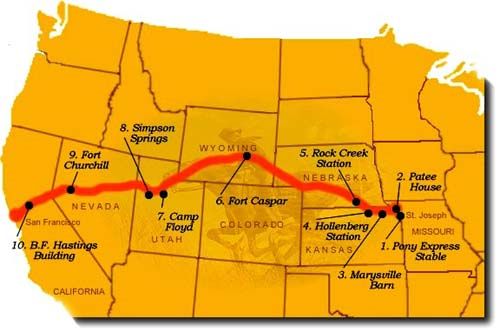