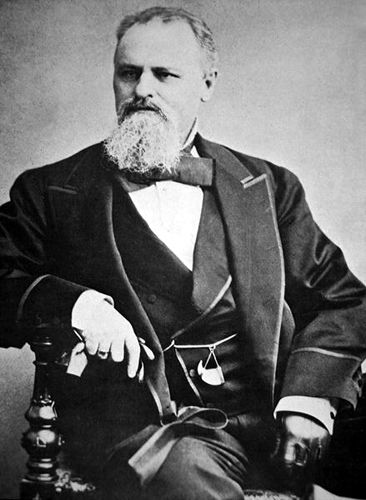 Benjamin Holladay was a transportation businessman known as the “Stagecoach King” after creating the Overland Stage Route to California during the height of the 1849 Gold Rush.

Ben Holladay was born in Nicholas County, Kentucky, on October 19, 1819, to William and Margaret “Peggy” Hughes Holladay. He helped his father lead wagon trains through the Cumberland Gap, learning the transportation business at an early age.

He left home in his late teens to travel to Santa Fe, New Mexico, along the Santa Fe Trail. Afterward, he settled in Weston, Missouri, where he worked as a store clerk, gaining practical business experience in merchandise and as a liquor salesman and tavern keeper. In 1838, he served as a courier during the Mormon War for the state militia. 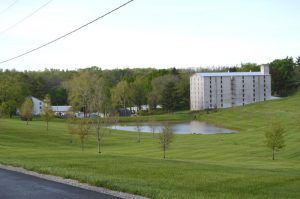 In 1840, he opened a tavern and hotel in Weston and was involved in what would become the McCormick Distilling Company. Today, the distillery still operates and claims to be the oldest distillery in the nation that operates at its original location. He was also involved in several other businesses, including a dry goods store, drug store, meatpacking plant, and various farm properties. He was also the first postmaster of Weston.

Holladay became seriously involved in the transportation business during the Mexican-American War in 1846 when he contracted with General Stephen Watts Kearny to supply wagons and provisions to the U.S. Army. After the war, he partnered with Theodore W. Warner to transport supplies to Salt Lake City, Utah, where they sold them to westbound emigrants.

Following the California Gold Rush, Holladay moved to San Francisco, California, in 1852, where he once again joined the transportation industry, getting involved in stagecoach lines and steamship companies.

When the Colorado Gold Rush began in 1858, Holladay capitalized by associating with the staging firm of Russell, Majors, & Waddell. The disruption of the Butterfield Overland Mail during the Civil War provided another business opportunity. In March 1862, he gained control of Central Overland California and Pikes Peak Express Company and its 1,200 miles of stage lines. After winning the postal contract for mail service to Salt Lake City, Utah, he established the Overland Stage Route along the Overland Trail.

He then improved and expanded the trail with more stations, a fleet of new Concord stages, and updated the numerous routes. By 1866, the Holladay Overland Mail and Express Company extended from Atchison, Kansas, to Denver, Colorado, to Salt Lake City, Utah. By this time, he was the sole owner of some 20,000 vehicles, employed more than 15,000 people, and passenger revenues often totaled $60,000 a month. The fare from Atchison, Kansas, to Salt Lake City was $350, and in five years, the U.S. Post Office paid him nearly two million dollars.

However, the shrewd Ben Holladay, well aware that the inevitable completion of the new Transcontinental Railroad would eliminate the need for stagecoach transportation, was fortunate to sell the route, equipment, and contracts Wells-Fargo.On November 1, 1866, he sold the company for $1.5 million cash, $300,000 worth of Wells Fargo and Company stock, and numerous other perks.

The overland mail continued for another 2 1/2 years along the Overland Trail until the Union Pacific and the Central Pacific Railroads met at Promontory Point, Utah, in 1869, eliminating the need for mail service via the stagecoach.

Holladay moved from San Francisco to Oregon in August 1868 to get involved in the railroad business. He soon organized the construction of a railroad along the Willamette River by purchasing the illegally incorporated Oregon Central Railroad of Salem. His goal was to build a rail line to California along the east side of the Willamette River. To do so, he spent about $55,000 in bribe money. The competition subsequently sold out to him in 1870, and after winning a federal subsidy, he built the Oregon and California Railroad as far south as Roseburg.

However, despite his hard work and sometimes questionable ethics, Holladay lost most of his fortune in the stock market collapse in September 1873. By 1876, Holladay was behind on his payments, and his financiers took over the railroad.

He spent the last years of his life involved in several lawsuits related to his complex financial holdings and died in Portland on July 8, 1887, at 68. He was buried at Mount Calvary Cemetery.

He dabbled in gold and silver mines, slaughterhouses, and several retail operations during his lifetime. He also maintained several mansions in New York, Washington, D.C., and Oregon by the time he was 50. 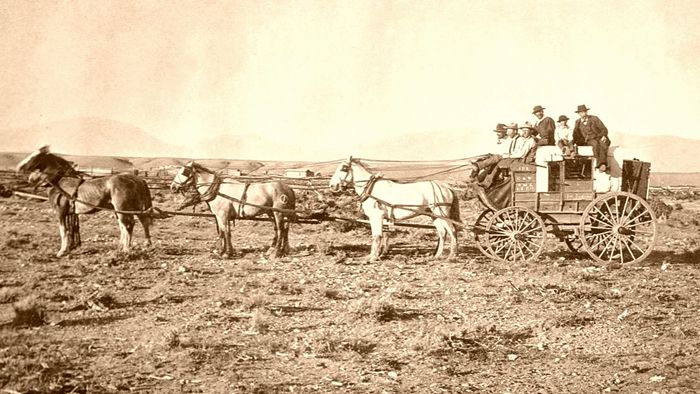 Stagecoach on the Overland Trail near Laramie, Wyoming.