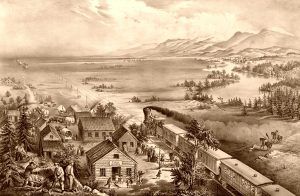 Across the Continent by Currier & Ives

In the meantime, the question of whether the Kansas frontier would become “slave” or “free state” was one of the many sparks of the Civil War. Despite the expense of the war, the nation continued to move forward with westward expansion. In general, before 1860 Northern Democrats promoted easy land ownership and Southern Democrats resisted it because it supported the growth of a free farmer population that might oppose slavery.

When the Republican party came to power in 1860 they promoted a free land policy — notably the Homestead Act of 1862, coupled with railroad land grants that opened cheap lands for settlers. The First Transcontinental Railroad was built between 1863 and 1869 which linked the existing railway network of the Eastern United States, with the west coast for the first time. During this time, the United States Army fought a series of Indian Wars in Minnesota, Dakota, and other places in the west as the tide of settlers moved across the nation.

By 1880 the settled area had been pushed into northern Michigan, Wisconsin, and Minnesota, along the Dakota rivers, and in the Black Hills region, and was ascending the rivers of Kansas and Nebraska. 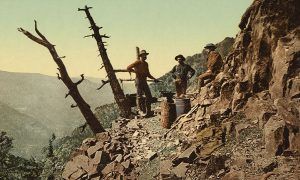 The development of mines in Colorado had drawn isolated frontier settlements into that region, and Montana and Idaho were receiving settlers. By this time, the frontier was found in these mining camps and the ranches of the Great Plains. However, in just a quarter of a century, the far western frontier had been settled. Three million families started farms on the  Great Plains during these years.

By 1890, the Superintendent of the census reported that the settlements of the West were so scattered over the region that there could no longer be said to be a frontier line. Census maps defined the frontier line as a line beyond which the population was under 2 persons per square mile. The original report stated:

“Up to and including 1880, the country had a frontier of settlement; but, at present, the unsettled area has been so broken by isolated bodies of settlement that there can hardly be said to be a frontier line.”

This brief official statement marked the closing of a great historic movement. Four centuries from the discovery of America, at the end of a hundred years of life under the Constitution, the frontier has gone.

Contrary to the popular image of the West as a rural region, by 1890 most of the West’s population lived in cities. Not only was the Trans-Mississippi West the country’s most culturally diverse region, it was also by 1890, the most urbanized. 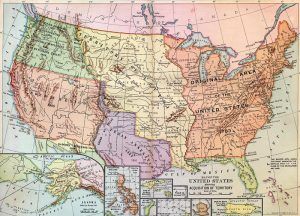