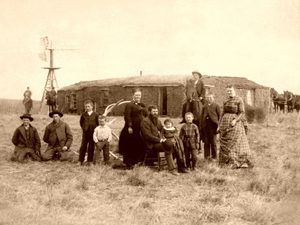 The free homestead law has been called the most important act for the welfare of the people ever passed in the United States.

In 1852 a political group called the Free Soil party, demanded free homesteads for the people. In 1854 the first free homestead bill was introduced in Congress by Congressman Galusha A. Grow of Pennsylvania. The people of the West and poor people everywhere were in favor of the bill; however, there was strong opposition.

The first Homestead Act required the settler to pay twenty-five cents an acre for his land and was passed by Congress in 1860; however, the bill was vetoed by President Buchanan.

It was not until May 20, 1862, that the free Homestead Act was finally passed and signed by then President Abraham Lincoln. The law took effect on January 1, 1863.

Under this law, any man or woman twenty-one years old or the head of a family could have 160 acres of undeveloped land by living on it five years and paying eighteen dollars in fees. They were also required to build a home, make improvements and farm the land before they could own it outright.  Alternatively, the homesteader could purchase the land for $1.25 per acre after having lived on the land for six months.

The first claim under the Homestead Act was made by Daniel Freeman for a farm in Nebraska on January 1, 1863.  Today, Freeman’s homestead continues to stand as the Homestead National Monument near Beatrice, Nebraska.  Freeman lived on and worked the land until his death on December 30, 1908.  His wife Agnes continued to live on the homestead until shortly before her death in 1931. In 1936, by an act of the United States Congress, the site of Freeman’s homestead was recognized as the “first” homestead in the United States when it was designated as the Homestead National Monument of America.

Settlers from all walks of life including newly arrived immigrants, farmers without land of their own from the East, single women and former slaves came to meet the requirements.

People interested in Homesteading first had to file their intentions at the nearest Land Office and after a check for any ownership claims, the prospector paid a filing fee of $10 to claim the land temporarily, as well as a $2 commission to the land agent. 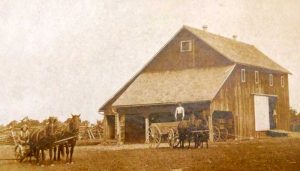 When all requirements had been completed and the homesteader was ready the take legal possession, the homesteader found two neighbors or friends willing to vouch for the truth of his or her statements regarding land improvement and sign the “proof” document.

After successful completion of this final form and payment of a $6 fee, the homesteader received the patent for the land, signed with the name of the current President of the United States. This paper was often proudly displayed on a cabin wall and represented the culmination of hard work and determination.

By the end of the 19th century, over 570 million acres remained open to settlement, but very little of this was usable for agriculture. As the Frontier moved west onto the arid Great Plains, the amount of land a homesteader was allowed to claim was increased to 640 acres.

In Wyoming, Montana, and Colorado homesteading cut into the access of the large ranches to the public domain where hundreds of thousands of cattle grazed upon the open range, a practice called free grazing. The ranchers fought back by themselves (or their cowboys) homesteading prime spots which gave access to water. At times tensions escalated into violence, conflicts called range wars; for example, the Johnson County War in Wyoming.

Ironically, the Homestead Act was often used as a scam. Usually, the land that was available was in too poor a shape to farm on, especially in the middle of the plains where droughts were common occurrences. Because of hardships like these, not many families actually stayed for the entire five years.

Many corporations also took advantage of this act. They would pay people to buy the top-of-the-line property which contained an abundance of resources such as timber, minerals, and oil. Then the settlers would claim later on that they had “improved” the land. In reality, the improvements made to the land were minimal.

The Homestead Act of 1912 reduced the homestead requirement from five to three years; however, by this time most of the land in the lower 48 states had already been taken.

The Taylor Grazing Act of 1934 substantially decreased the amount of land available to homesteaders in the West. Because much of the prime land had been homesteaded decades earlier, successful homestead claims dropped sharply after this time.

Homesteading continued on a small scale in Alaska. Much of the remaining public domain was included in the National Forests or is administered by the Bureau of Land Management. 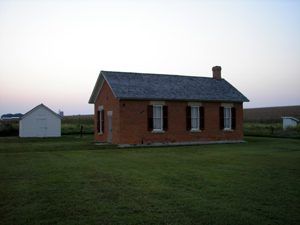 The Federal Land Policy and Management Act of 1976 ended homesteading; the government believing that the best use of public lands was for them to remain in government control. The only exception to this new policy was Alaska, for which the law allowed homesteading until 1986.

Homestead farmers, who claimed some 270 million acres over the years, became the agricultural producers to the nation as a whole. Additionally, strong communities with a commitment to social values, education, and personal responsibility were spawned throughout the territories covered by the Homestead lands.

The economic, agricultural, and social stability generated by the Homestead Act was utterly inconceivable in other times and places — and formed a large part of the foundation of American prosperity in the 20th century. 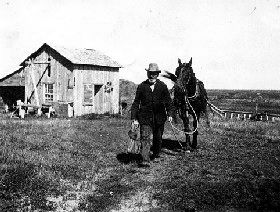 Pioneers of the American West

Struggle For Possession – The First Emigrants (by Randall Parrish 1907)

The Frontier In History by Emerson Hough (1918)

Another fun video from our friends at Arizona Ghost Riders: Houses in the Wild West