The frontier! No word in the English language is more stirring, intimate, or beloved. It has in it all the passion of the old French phrase, En avant! It carries all of the old Saxon command, Forward!! It means all that America ever meant. It means the old hope of real personal liberty and yet a real human advance in character and achievement. To a genuine American, it is the dearest word in all the world.

What is, or was, the frontier? Where was it? Under what stars did it lie? Because, as the vague Iliads of ancient heroes or the nebulous records of the savage gentlemen of the Middle Ages make small specific impingement on our consciousness today, so also even now begin the tales of our own old frontier to assume a haziness. This unreality makes them seem less history than folklore. 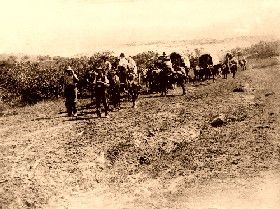 Now the truth is that the American frontier of history has many a local habitation and many a name. And this is why it lies somewhat indefinite under the blue haze of the years, all the more alluring for its lack of definition, like some old mountain range, the softer and more beautiful for its own shadows.

The fascination of the frontier is and has ever been an undying thing. Adventure is the meat of the strong men who have built the world for those more timid. Adventure and the frontier are one and inseparable. They suggest strength, courage, and hardihood — qualities beloved in men since the world began — qualities which are the very soul of the United States, itself an experiment, an adventure, a risk accepted. Take away all our history of political regimes, the story of the rise and fall of this or that partisan aggregation in our government; take away our somewhat inglorious military past, but leave us the tradition of the American frontier forever! There lies our comfort and our pride. There we never have failed. There, indeed, we always realized our ambitions. There, indeed, we were efficient before that hateful phrase was known. There we were a melting pot for character before we came to know that odious appellation that classifies us as the melting pot of the nations.

The frontier was the place and the time of the strong man, of the self-sufficient but restless individual. It was the home of the rebel, the protestant, the unreconciled, the intolerant, the ardent–and the resolute. It was not the conservative and tender man who made our history; it was the man sometimes illiterate, often uncultured, the man of coarse garb and rude weapons. But, the frontiersmen were the true dreamers of the nation. They were the possessors of a national vision. Not statesmen but riflemen and riders made America. The noblest conclusions of American history still rest upon the premises that they laid. 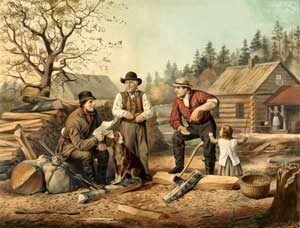 The American Frontier by Nathaniel Currier.

But, in its broadest significance, the frontier knows no country. It also lies in other lands and in other times than our own. When and what was the Great Frontier? We need to go back only to the time of Drake and the sea dogs, the Elizabethan Age when all of North America was a frontier, almost wholly unknown, compellingly alluring to all bold men. That was the day of new stirrings in the human heart. Some strange impulse seemed to act upon the soul of the braver and bolder Europeans, and they moved westward, nor could have helped that had they tried. They lived largely and blithely and died handsomely, those old Elizabethan adventurers. They lie today in thousands of unrecorded graves upon two continents, each having found out that any place is good enough for a man to die upon, provided that he be a man.

The American frontier was Elizabethan in its quality–childlike, simple, and savage. It has not entirely passed, for Elizabethan folk and Elizabethan customs are yet to be found in the United States. While the half-savage civilization of the farther West was roaring on its way across the continent — while the day of the keel boatman and the plainsman, of the Indian fighter and the miner, even the day of the cowboy, was dawning and setting–there still was a frontier left far behind in the East, near the top of the mountain range which made the first great barrier across our pathway to the West.

That frontier, the frontier of Daniel Boone and Simon Kenton, of James Robertson and John Sevier, still exists and may be seen in the Cumberland — the only remaining part of America which is all American. There, we may find traces of the Elizabethan Age — idioms lost from English literature and American speech long ago. There, we may see American home life as it went on more than a hundred years ago. We may see hanging on the wall the long muzzle-loading rifle of an earlier day. We may see the spinning wheel and the loom. The women still make, in part, the clothing for their families, and the men still make their household furniture, farming implements, and boots. 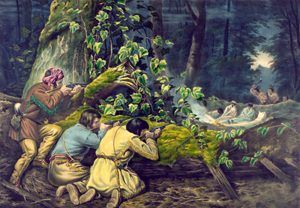 This overhanging frontier of America is a true survival of the days of Drake and the days of Boone. The people are at once godly and savage. They breed freely; they love their homes; they are ever ready for adventure; they are frugal, and abstemious, but violent and strong. They carry on still the half-religious blood feuds of the old Scotch Highlands or the North of Ireland, whence they came. They reverence good women. They care little for material accumulations. They believe in personal ease and personal independence. With them, life goes on not in the slow monotony of reiterated performance, but in ragged profile, with large exertions followed by large repose. Now that has been the fashion of the frontier in every age and every land of all the world. And so, by studying these people, we may even yet arrive at a just and comprehensive notion of what we might call the “feel” of the old frontier.

Our frontier crawled west from the first seaport settlements, afoot, on horseback, in barges, or with slow wagon trains. It crawled across the Alleghanies, down the great river valleys, and up them yet again, and at last, in days of new transportation, it leaped across divides, from one river valley to another. Its history, at first so halting, came to be very swift — so swift that it worked great elisions in its own story.

In our own day, however, the Old West generally means the old cow country of the West — the high Plains and the lower foothills running from the Rio Grande to the northern boundary. The still more ancient cattle range of the lower Pacific Slope will never be accepted as the Old West. Always, when we use these words, we think of buffalo on the Plains and of Indians, and of their passing before the footmen and riders who carried the phantom flag of Drake and the Virgin Queen from the Appalachians to the Rockies — before the men who eventually made good that glorious and vaunting vision of the Virginia cavaliers, whose party turned back from the Rockfish Gap after laying claim in the name of King George on all the country lying west of them, as far as the South Sea! 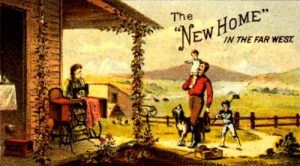 New home in the Far West.

With very good logic, the American cow country may arrogate to itself the title of the real and typical frontier of the world. We call the spirit of the frontier Elizabethan, and so it was; but even as the Elizabethan Age was marked by its contact with the Spanish civilization in Europe, on the high seas, and in both the Americas, so the last frontier of the American West also was affected, and largely, deeply, by Spanish influence and Spanish customs. The very phraseology of range work bears proof of this. Scores of Spanish words are written indelibly in the language of the Plains. The frontier of the cow range never was Saxon alone.

It is a curious fact also, seldom if ever noted, that this Old West of the Plains was very largely Southern and not Northern on its Saxon side. No States so much as Kentucky and Tennessee and, later, Missouri — daughters of Old Virginia in her glory — contributed to the forces of the frontiersmen. Texas, farther to the south, put her stamp indelibly upon the entire cattle industry of the West. Visionary, impractical, restless, adventurous, these later Elizabethan heroes–bowing to no yoke, insisting on their own rights and often scorning the laws of others, yet careful to retain the best and most advantageous customs of any conquered country–naturally came from those nearest Elizabethan countries which lay abandoned behind them.

If the atmosphere of the Elizabethan Age still may be found in the forgotten Cumberlands, let us lay claim to kinship with yonder roistering heroes of a gallant day, for this was ever the atmosphere of our own frontier. To feel again the following breezes of the Golden Hind or see again, floating high in the cloudless skies, the sails of the Great Armada, was the privilege of Americans for a double decade within the memory of men yet living in that country, so unfailingly beloved, which we call the Old West of America.

By Emerson Hough, 1918. Compiled and edited by Kathy Alexander/Legends of America, updated November 2022. 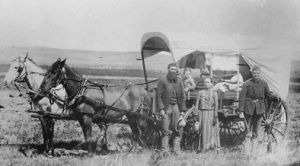 About the Author:  Excerpted from the book The Passing of the Frontier, A Chronicle of the Old West, by Emerson Hough, Yale University Press, 1918. Emerson Hough (1857–1923).was an author and journalist who wrote factional accounts and historical novels of life in the American West. His works helped establish the Western as a popular genre in literature and motion pictures. For years, Hough wrote the feature “Out-of-Doors” for the Saturday Evening Post and contributed to other major magazines. The article as it appears here is not verbatim as it as been edited.