Wild Bunch, aka: Hole in the Wall Gang (1896-1901) – Led by Butch Cassidy, the Wild Bunch terrorized the states of Colorado, Wyoming, Montana, Idaho, Utah, and Nevada for five years.

William Ellsworth “Elza” Lay, who was also known by Elzy Lay and William McGinnis was an outlaw member of Butch Cassidy’s Wild Bunch operating out of the Hole-in-the-Wall Pass in Johnson County, Wyoming, Lay also sometimes rode with the Ketchum Gang in New Mexico.

Lay was born in Mount Pleasant, Ohio on November 25, 1869, to James Landon Lay and Mary Jane Bellew. Shortly after his birth, the family moved to northeastern Colorado. At the age of 18, Lay left home looking for adventure with his childhood friend William McGinnis. McGinnis soon returned home but Elza stayed afield. Later, he would use the name “McGinnis” as an alias when working as a ranch hand.

In 1889, he met Butch Cassidy while working on a ranch in Wyoming. The two became close friends, and Lay began dating Josie Bassett, the daughter of a rancher that often sold beef and horses to the outlaws, while Cassidy began dating her sister, 15‑year-old future female western outlaw Anne Bassett. He worked briefly on the ranch of cattleman Matt Warner, and it was Warner who gave Lay his first tip for a robbery. From Warner, Lay learned that a shopkeeper nearby had a large sum of cash. Warner, his nephew Lew McCarty, and Lay robbed the man and split the money.

Lay then opened up a gambling house in Vernal, Utah. For a time, it was profitable, until it was shut down by Uintah County Sheriff John T. Pope. Following his business being closed, Lay moved back to Matt Warner’s ranch, where he renewed his relationship with Josie Bassett. He remained there until Butch Cassidy was released from an 18-month prison sentence he had been serving. 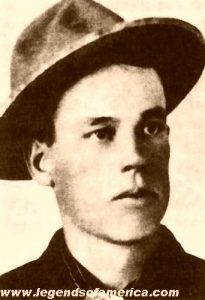 On July 11, 1899, he robbed a train with the Ketchum Gang in New Mexico. In the process, he was injured but still managed to escape. However, the law caught up with him on August 16th and he was tried, convicted, and sent to the New Mexico Territorial Prison. In 1906, he was released and went back to Wyoming, settling in Baggs, where he ran a saloon. Several years later, he married, had two daughters and moved to California. Other than an alleged visit to the Bassett sisters, Lay had no other known contact with members of the Wild Bunch after his release.

He died in Los Angeles in 1934 and was buried at Forest Lawn in Glendale, California, near Los Angeles.