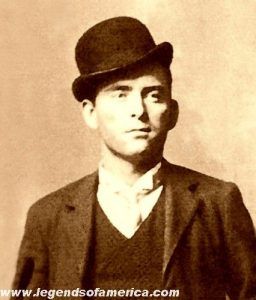 William “News” Carver was an outlaw and Texas cowboy who rode with the Black Jack Ketchum Gang, the Wild Bunch, and the High Fives Gang.

Born in Coryell County, Texas around 1866, the young man worked as a cowboy at the Half Circle Six Ranch in Tom Green County, when he fell in love with and married 17-year-old Viana Byler in 1891. However, just a few months later, Viana took sick and died and Carver, heartbroken, turned to a life of crime.

Later he would turn his affections towards Viana’s 15-year-old niece, Laura Bullion, who would often assist him in his outlaw pursuits. In 1896, Carver carried out several robberies in New Mexico with Thomas “Black Jack” and Sam Ketchum.

On August 29, 1900, Carver, along with Cassidy, the Sundance Kid, and Harvey Logan held up a Union Pacific train at Tipton, Wyoming. Wasting no time, they then hit the First National Bank of Winnemucca, Nevada on September 19th, taking more than $32,000. The following year the gang obtained $65,000 from the Great Northern train near Wagner, Montana.

In April 1901, William Carver and Ben Kilpatrick had returned to Texas and on April 2 Carver was ambushed by Sheriff Elijah Briant and his deputies in Sonora. Shot by Briant, Carver died from his wounds three hours later. Kilpatrick was able to escape, was later imprisoned, and died during another train robbery