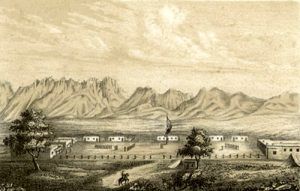 Fort Fillmore, New Mexico was located along the Rio Grande not far from the Mexican border and about six miles southeast of the town of Mesilla.

This tiny adobe fort was founded to control local Apache and protect the traders and settlers traveling to California. It was established by Colonel Edwin Vose Sumner in September 1851 and named for President Millard Fillmore. During this time, a number of forts were established by the Federal Government to protect and encourage westward expansion. Fort Fillmore specifically protected several migration routes that converged between El Paso, Texas and Tucson, Arizona.

By the end of the 1850s, the post had declined and fallen into serious disrepair. In 1861; however, spurred by rumors of the Confederate invasion of New Mexico, the Army reinforced it with Major Isaac Lynde at the command.

On July 24, 1861, 250 troops of the 2nd Texas Mounted Rifles, led by Lieutenant Colonel John R. Baylor, crossed the Rio Grande into Mesilla, which had already declared itself a Confederate city. The Texas soldiers were quickly joined by a company of Arizona Confederates.

Hearing of their arrival, Major Lynde planned an attack upon the city the next day, resulting in the First Battle of Mesilla, which resulted in a Confederate victory. Failing in their attempt to take Mesilla, the Federal garrison abandoned the fort and marched toward Fort Stanton, New Mexico, but were captured east of Las Cruces. Fort Fillmore was then claimed by the Confederates and there was no attempt by the Union to reoccupy it.  The next summer, California Volunteers temporarily occupied the post before moving into Mesilla.

The fort was officially closed by the Union in October 1862, but, the site remained a waypoint along several major routes throughout the period of western expansion. Over the years, the small fort continued to deteriorate and fell into ruins. Decades later, the owner of the land made an attempt to sell, trade, or possibly donate the site to the State of New Mexico, if they would make it a park. However, the Parks Department was budget-strapped and other projects had more visible ruins and higher historic profiles. In the end, the site was leveled and planted with pecan trees. The site of the fort is situated on Fort Fillmore Road, about 1 ¼  miles east of New Mexico Highway 478. A State marker is located in the vicinity but not at the actual site.