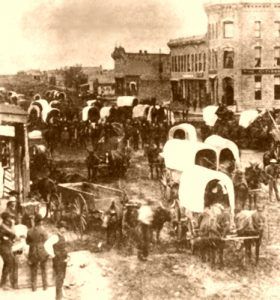 George W. Flatt was a fearless gunfighter and was Caldwell, Kansas‘ first marshal in 1879, but was not well-liked.

On April 5, 1880, a new mayor was elected in Caldwell, namely one Mike Meagher. One of the first things Meagher did was discharge City Marshal George Flatt because he disapproved of Flatt’s confrontational way of law enforcement. He then appointed William Horseman as the new marshal; Frank Hunt and Dan Jones as deputies, and James Johnson as constable. Flatt was none too happy about this event and wasted no time voicing his complaints about Meagher and the new police department.

He insisted that his only enemies were those of the city administration and that the rest of the town was behind him. These words would wind up leading to his demise. On the evening of June 18, 1880, a drunken Flatt made his rounds in a number of Caldwell saloons, voicing his complaints to anyone who would listen. Somewhere along the line, he ran into Frank Hunt and the two argued until Hunt was finally able to persuade Flatt to go home at about 1:00 o’clock in the morning.

But Flatt wouldn’t make it. On his way, he was ambushed and died in the street with a bullet in the back of his skull. On June 25th, Sumner County Sheriff, Joe Thralls, arrested Mayor Mike Meagher, and police officers William Horseman, Frank Hunt, James Johnson, and Dan Jones for the murder. Five days later, on June 30th, all but Frank Hunt and William Horseman were released.  Of the event, the local newspaper, the Caldwell Commercial, said on July 1st:

“What the result of all this will be it is impossible to say, but, if we are correctly informed, the whole thing has the appearance of a put-up job.”

The newspaper was correct. The other two men were discharged after a court examination on July 3rd. Though all of the men were bound over for trial, the judicial system would follow through only with William Horseman. A year later he was acquitted.