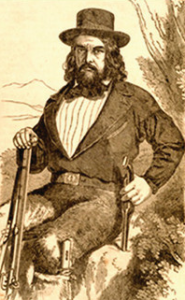 Love was born in Vermont in about 1809 and left home at an early age to become a sailor. Love was said to have known Davy Crockett and Sam Houston and had a brother who died at the Alamo. He fought in the Blackhawk Indian War in 1831 with Abraham Lincoln and later in the Mexican-American War in 1846. He was also a scout, an army express rider, a Texas Ranger, and an explorer of the Rio Grande in 1850.

After hearing about the discovery of gold in California, Harry moved there around 1850. After unsuccessfully trying his hand at gold prospecting, Harry served as a deputy sheriff in Santa Barbara, California, and also worked as a bounty hunter.

On May 11, 1853, California Governor John Bigler signed a legislative act authorizing the organization of a California Rangers band under Captain Harry Love’s command. Their purpose was to capture or kill the infamous bandito Joaquin Murrieta, the ringleader of a gang of men believed to be responsible for much of the cattle rustling, robberies, and murders in the Mother Lode region.

In July of 1853, the Rangers came across a group of bandits near Arroyo Cantúa in San Benito County. In the ultimate gunfight, they killed two of them, who were allegedly the famous Joaquin Murrieta and his right-hand man, Three-Fingered Jack.

Love was killed in June 1868 in Santa Clara, California, when he was in a wrestling brawl with a man named Christian Ivorson. During the scuffle, Harry’s pistol accidentally discharged into his armpit, and he died the next day.