The El Paso Gunfight, sometimes referred to as the “Four Dead in Five Seconds Gunfight” or the “Battle of Keating’s Saloon,” occurred on April 14, 1881. The whole affair began when the Manning Brothers had stolen a herd of about 30 head of cattle in Mexico and drove them into Texas to sell. When Texas Ranger Ed Fitch and two Mexican farmhands named Sanchez and Juarique investigated, the two Mexican men were killed. This led to a Mexican posse of more than 75 men crossing into Texas seeking an investigation.

At the request of the Mexican posse, Gus Krempkau, an El Paso constable, accompanied the posse to the ranch of Johnny Hale, a local ranch owner, and known cattle rustler. There, they found the bodies of the two Mexican farmhands. The El Paso Court soon held an inquest into the deaths of the two men, with Krempkau acting as an interpreter. 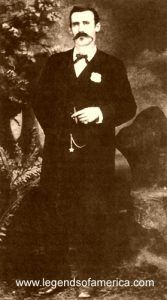 Afterward, Constable Krempkau went next door to Keating’s Saloon, one of the worst pestholes in El Paso, Texas. A confrontation erupted between Krempkau and ex-City Marshal George Campbell, a friend of John Hale’s. Also in the saloon was Hale himself, who was unarmed, heavily intoxicated, and also upset with Krempkau due to his involvement in the investigation. Suddenly, the drunken Hale pulled one of Campbell’s two pistols, shouting, “George, I’ve got you covered!” Hale then shot Krempkau, who fell wounded against the saloon door. Realizing what he had done, Hale ran behind a post in front of the saloon just as Marshal Dallas Stoudenmire appeared with his pistols raised. Stoudenmire then shot once, but the bullet went wild, hitting an innocent Mexican bystander. When Hale peeked out from behind the post, Stoudenmire fired again, hitting Hale between his eyes and killing him instantly.

In the meantime, when Campbell saw Hale go down, he exited the saloon, waving his gun and yelling, “Gentlemen, this is not my fight!” However, the wounded Krempkau disagreed and though down, fired at Campbell, striking him in the wrist and toe. At the same time, Stoudenmire whirled and fired on Campbell, pumping three bullets into his stomach. As Campbell crashed to the dusty street, he shouted, “You s.o.b., you have murdered me!” When the dust cleared, both George Campbell and Constable Kremkau lay dead.

In less than five seconds in a near comic opera gun battle, four men lay dead. The killers of the two Mexican farmhands were never caught.