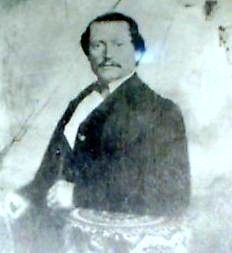 Jack (John) McCall, also known as “Crooked Nose” Jack, would probably have never been remembered in history if he hadn’t shot Wild Bill Hickok in Deadwood, South Dakota. Not specifically an “outlaw,” McCall was more notorious for his drunkenness and stupidity, and perhaps as a scoundrel. However, as he utilized several aliases throughout his lifetime, there may very well have been more dastardly deeds in his past of which we are unaware.

Born around 1850 in Jefferson County, Kentucky, he was raised there along with his three sisters. McCall drifted west as a young adult and worked in the Kansas–Nebraska border country with a group of buffalo hunters by about 1869. Later he was known to have been in Wyoming before arriving in Deadwood, South Dakota, in 1876, going by the name of Bill Sutherland.

Newspaper accounts described him as having thick chestnut hair, a small sandy mustache, a double chin, and crossed eyes.

Soon after he arrived in Deadwood, he was drinking at the bar at Nuttall and Mann’s No. 10 Saloon on August 1, 1876. Getting steadily drunk, he watched as Wild Bill Hickok played poker at a full table. When one of the players dropped out, McCall quickly took his place. Drunk and overmatched, McCall lost hand after hand until he had not a dime left in his pocket. Hickok then gave McCall some money to buy himself something to eat and advised him not to play again until he could cover his losses. Though McCall accepted the money, he felt insulted. Original location of the #10 Saloon where Wild Bill Hickok was killed in Deadwood, South Dakota. Photo by Kathy Weiser-Alexander.

The next afternoon when Wild Bill entered Nuttall & Mann’s Saloon, he found Charlie Rich sitting in his preferred seat. After some hesitation, Wild Bill joined the game, reluctantly seating himself with his back to the door and the bar—a fatal mistake. Jack McCall, drinking heavily at the bar, saw Hickok enter the saloon, taking a seat at his regular table in the corner near the door. Seeing an opportunity to avenge himself of the insult and perhaps to make a name for himself, McCall came up behind Hickok, pointed his .45 caliber revolver at the back of his head, and pulled the trigger as he shouted, “Damn you, take that!” Hickok, holding a hand of Aces and Eights, fell instantly dead to the floor.

Afterward, the cowardly McCall ran immediately from the saloon and attempted to escape on someone else’s horse that was tethered nearby. However, because the saddle had been loosened, he fell to the ground. He then ran down the dusty street and hid in a butcher’s shop, but within minutes, he was found by a large crowd.

The next day, the mining camp assembled a miners’ court, convening at the McDaniels/Langrishe Theater. Though the City of Deadwood had no legal jurisdiction, they appointed a defense attorney, prosecutor, and judge and began McCall’s trial for murder.

McCall claimed he had shot Wild Bill in revenge for killing his brother back in Abilene, Kansas, and maintained that he would do it all over again given a chance. In less than two hours, the jury returned a “not guilty” verdict that evoked this comment in the Black Hills Pioneer:

“Should it ever be our misfortune to kill a man … we would simply ask that our trial may take place in some of the mining camps of these hills.”

McCall lingered about Deadwood for several days until a man called California Joe strongly suggested the air might be bad for McCall’s health. McCall got the message and, believing he’d escaped punishment for his crime, headed to Wyoming bragging to anyone who would listen that he had killed the famous Wild Bill Hickok. Less than a month later, the trial held in Deadwood was found to have had no legal basis, Deadwood being located in Indian Territory. McCall’s boasting would be the death of him when a U.S. Deputy Marshal in Laramie, Wyoming, heard his bragging and arrested him on August 29. Charged with murder, he was taken to Yankton, South Dakota, to stand trial.

Lorenzo Butler Hickok traveled from Illinois to attend the trial of his brother’s murderer, which began on December 4, 1876, and was gratified when McCall was found guilty on December 6.

On March 1, 1877, Jack McCall was marched up the platform where he kneeled with a priest with his arms and legs tied. The black hood was drawn over his head when he stood up, and McCall asked the marshal for just one more moment of prayer.

Afterward, the noose was placed around his neck, and McCall allegedly said, “Draw it tighter, Marshal.” At 10:10 a.m., the trap was sprung, and McCall was hanged, the first to be legally executed in Dakota Territory. As to McCall’s earlier claim of having shot Hickok out of revenge for his brother, it was discovered that Jack McCall never had a brother.

McCall was buried in the southwest corner of Yankton’s Catholic cemetery. In 1881, when the cemetery was moved to make room for the Territorial Insane Hospital, his body was exhumed, and it was discovered that he had been buried with the noose still around his neck. Though his remains were reburied in an unmarked grave in the Yankton Cemetery, the exact location was lost over time and remains unknown today.