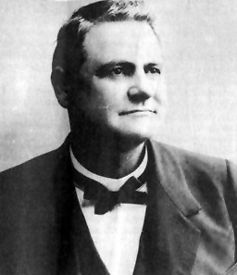 Jacob “Blake Jake” Yoes was a miner, soldier, entrepreneur, and one of the best known of Judge Isaac Parker’s U.S. Marshals.

Jacob Yoes was born on December 3, 1839, in Washington County, Arkansas to Reverend Conrad and Kissiah Bloyed Yoes. He left home at the age of 17, later married Mary Ann Reed, and worked in the lead mines in Granby, Missouri. In 1862, he enlisted in the First Arkansas Cavalry of the U.S. Army where he fought in the Battle at Prairie Grove. During his service, his primary task was fighting bushwhackers, of which, he is said to have killed about 50 men. Along the way, he took shots in both hips and the left leg. In 1864, he refused a 1st Lieutenant’s commission and was discharged.

In 1870, he established a country store near Winslow, about 25 miles south of Fayetteville, Arkansas and about the same time, was elected as the Washington County Sheriff. Yoes entrepreneurial spirit continued as he built a number of stores all along the Frisco Railroad between Fayetteville and Fort Smith, established a flour mill, and owned interests in a canning factory and several hotels. Later, he would also serve in the Arkansas legislature.

In May of 1889, he was appointed U.S. Marshal of the West District of Arkansas with 200 deputies under his command. Later, he developed a number of real estate interests and the community of Yoestown, Arkansas was named for him. Jacob Yoes died February 6, 1906, and was buried in the National Cemetery at Fort Smith, Arkansas.