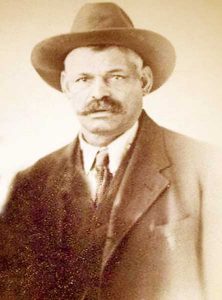 Rufus “Rufe” Cannon was a U.S. Deputy Marshal who was one of the most important black lawmen of the Oklahoma territorial era.

Cannon was born in Arkansas on January 22, 1847. He was commissioned as a U.S. Deputy Marshal on September 15, 1892, in the Western District at Fort Smith, Arkansas serving under Marshal Jacob Yoes.

Though not as well known as other African-American peace officers in Oklahoma, such as Bass Reeves and Grant Johnson, he was notable for participating in the capture of several notorious outlaws.

Cannon was of both Cherokee and African-American descent as was familiar with many of the Cherokee native customs and the language, which helped him greatly in his position.

One of Cannon’s first notable captures was the arrest of the notorious African Creek outlaw Captain Willie, who had murdered Oklahoma City U.S. Deputy Marshal George Thornton in 1891.

Rufe was riding with fellow U.S. Deputy Marshal Ike Rogers in January 1893, when they encountered Jesse Jackson, Henry Starr and George “Slaughter Kid” Newcomb near Bartlesville, Oklahoma. The outlaws resisted arrest and in no time, a gun battle ensued, in which more than 100 rounds were fired. Cannon shot Jesse Jackson in the side and right arm. The wounded Jackson surrendered but Henry Starr and George Newcomb escaped.

In 1895, Cannon arrested William Christian of the Christian outlaw gang, but unfortunately Christian was able to later escape, fleeing to Arizona and continuing his life of crime.

Cannon was with the posse led by Heck Thomas that tracked down and killed Bill Doolin on August 24, 1896. Though some accounts actually say that Cannon was the one who shot Bill Doolin, Thomas got the credit for it. Interestingly; however, all the posse men were rewarded for Doolin’s demise, except for Cannon. It is not known why Cannon was not paid, but it is believed that Heck Thomas shared part of his reward with Cannon.

Later, Cannon left the Fort Smith region and moved to Kansas City where he lived to be 103 years old.