Frank M. Canton was a famous lawman, gunman, cowboy, and at one point in his life, an outlaw during the wild days of the Old West.

Canton was born Josiah Horner on September 15, 1849, near Richmond, Virginia. As a child, he moved to Texas with his family and, in his teens, became a cowboy, herding cattle from North Texas to the Kansas railheads in the 1860s. In 1871 he dropped from sight and made his living as a bank robber and rustler. On October 10, 1874, Horner got into a gunfight with some Buffalo Soldiers, killing one and wounding the other. In 1877, he was jailed for robbing a bank in Comanche, Texas but escaped and returned to cattle herding. After driving a herd to Ogallala, Nebraska, he changed his name to Frank Canton and vowed to uphold law and order.

He was soon hired as the top enforcer of the Wyoming Stock Grower’s Association, a group of powerful cattlemen in Johnson County, Wyoming. He was later elected sheriff of the county. He made his reputation in the notorious Johnson County War of Wyoming in the 1890s and was involved in the unlawful hanging of James Averell and Cattle Kate. 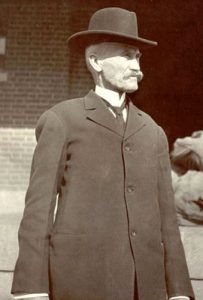 Afterward, he fled south, becoming a U.S. Deputy Marshal in Indian Territory under Judge Isaac Parker and made a name for himself as a strong and honest lawman. In 1897, Canton went to Alaska to follow the Klondike Gold Rush but instead became a Deputy U.S. Marshal again. After a couple of years, he returned to Oklahoma and once more became a lawman. In 1907, he became adjutant general of the Oklahoma National Guard, a post he held until his death on September 27, 1927. He was buried at the Fairlawn Cemetery in Oklahoma City, Oklahoma.