Maria Percival Robbins died on January 9, 1893, aged 65 years.  Her husband, James J. Robbins, followed on September 19, 1898, aged 76 years, 6 months.  Each passing was noted in a very brief newspaper obituary.  They lie together today in the Holy Cross Cemetery in Colma, California.  No headstone marks their graves.

Maria Robbins’ quiet passing and commemoration stand in stark contrast to the uproar she caused a quarter century earlier in Virginia City, Nevada as “lady correspondent” for the San Francisco Chronicle, writing under the pseudonym Mary Jane Simpson. 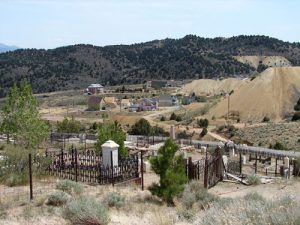 One of several historic cemeteries in Virginia City, photo by Maureen Skoblar, May, 2007.

In Virginia City in what is now known as the Silver Terrace Cemeteries, there is a raised monument at the end of a stone path dedicated to the memory of Mary Jane Simpson.  Beneath the monument lie the remains not of the correspondent, but of a mule that bore her name.

Mary Jane Simpson (the human) was an outspoken commentator on life in Virginia City in the heyday of the Comstock Lode, a spectacular deposit of silver and gold on the eastern slopes of Mount Davidson that led to the explosive growth of the Washoe region of Nevada and the boomtown Virginia City.

Mary Jane Simpson’s column ran more-or-less weekly in the San Francisco Chronicle from the middle of June 1870 to early April 1871 under such headlines as Virginia City, Virginia Gossip and Virginia City Gossip.  She advanced her views on local theatre, ladies’ fashions, society events and personal gossip, but also addressed more serious subjects like city fires, municipal water supplies, and – of considerable interest to her Virginia City readers — the economics and politics of the mines.  She took on the “Ring,” a group of aggressive businessmen, headed by William Ralston and William Sharon, who, in the spirit of the robber baron era, sought to profit from mines and associated businesses by such questionable tactics as insider trading, stock manipulation and creative accounting.   Mary Jane Simpson challenged the Ring on any number of issues.  She questioned news of new ore discoveries that tended to raise the price of mining stocks.  She sympathized with the miners in a labor dispute and was especially contentious over a proposal to reduce their wages and employ (cheaper) Chinese labor.  She accused the Nevada Republicans of favoring the Ring and was exultant when the Democrats swept the 1870 elections.  In one column (December 11, 1870), under the heading “How the Stockholders of the Mines are Robbed,” she described in detail endemic corruption and willful misrepresentation at each stage of the process of extracting and processing the ore.

Of course she made enemies.  A few months after her tenure as a correspondent, The Gold Hill Daily News (July 31, 1871) referred to her “many lying letters last year to the San Francisco Chronicle” based on information provided by her husband and sneered that “according to their stupid ideas of things, hardly a dollar was left in all the mines on the Comstock.”   The article concludes:

The Chronicle got rid of its silly correspondent, “Mary Jane Simpson,” and lucky it was for the paper, as it would hardly have a reader to-day on the Comstock had it not done so.  Time and its realities is a good jury for the conviction of falsifiers.

“Mary Jane Simpson,” the Chronicle’s Virginia City (Nev.) correspondent, continues to be a thorn in the sides of the Nevada “Ring” and its advisers.  From her contented equanimity and good humor, we are of the opinion that she rather likes it.  The people do.

Her husband, James J. Robbins, shows up mostly in San Francisco in the 1860s and 1870s as something of a renaissance man, working as a lawyer, a stockbroker, an agent and superintendent for a paving company, an editor for the San Francisco Chronicle, a trustee for a publishing company and, for several years, president of the Dardanelles Mining Company with interests in the Comstock Lode.  The couple seems to have had a literary bent, both publishing ghost stories in 1871 in the Overland Monthly, a California literary magazine.   Mary Jane/Maria wrote poetry as well.  The 1870 census has them living in Virginia City and the 1880 census in San Francisco.  They were well-off financially and lived in San Francisco’s luxury hotels, rubbing elbows with the likes of mining magnate and politician George Hearst.

In a bizarre incident, James Robbins was accused of sexually molesting two young girls in Modesto in August of 1883 in what appears to have been an attempt at blackmail.  Twice in the crosshairs of a vigilance committee, he survived and ultimately managed to prove his innocence by disrobing in court and revealing the absence of tattooed marks one of the girls claimed to have seen on his body.  In the words of the Napa Register (February 22, 1884), the trial “resulted not only in the acquittal of Robbins of the crime charged against him but in his complete moral vindication in the sight of all men.” 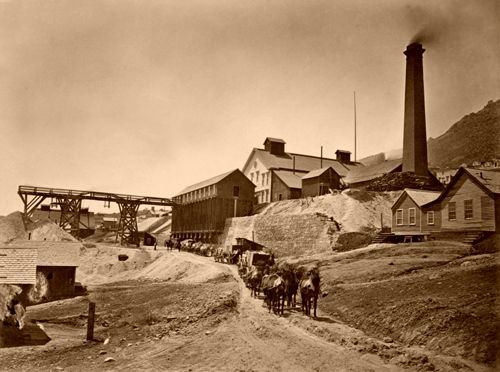 Mary Jane Simpson (the mule) was acquired to help solve a problem deep in the bowels of the Belcher mine, one of many engaged in extracting the mineral resources of the Comstock Lode.   In the fall of 1871, the miners were struggling to push loaded cars up an incline to a shaft through which the ore would be raised to the surface about 1000 feet above.  Superintendent Hank Smith relieved the miners by employing mules.  A male named Old Pete was drafted for the task at the end of September and was surprisingly calm about having his legs bound and his body lowered down a mine shaft.  A few days later Pete was joined by a female who, reflecting the rough humor of the miners, was dubbed Mary Jane Simpson after the not-always-popular Chronicle correspondent.  The team of Pete and Mary Jane was augmented a few months later by another female, this one named Susan B. Anthony.   It seems that the miners were less than supportive of late nineteenth-century notions of women’s rights. 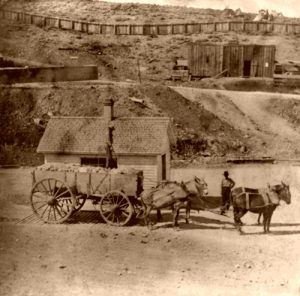 Mary Jane Simpson spent eighteen subterranean months hauling cars loaded with ore over railroad tracks.  While mules have their partisans, they have a reputation for being willful and stubborn and often frustrating on the job.  Not so Mary Jane.  Never was there a more cooperative and good-natured beast and she captured the hearts – and frequently the dinner pails — of the miners.

In the spring of 1873, her services were no longer needed as it was now possible to hoist the ore directly to the surface by steam machinery.  Mary Jane Simpson was retired to a nearby ranch in company with Victoria Woodhull, another female mule named after a women’s rights crusader and, like Mary Jane, a veteran of the Belcher mine.  Victoria Woodhull met an untimely end when she tragically choked to death, having placed her head between two boards of the fence that enclosed the two animals.

Mary Jane was purchased by the Consolidated Virginia mine and put back to work early in 1875, this time on the surface, hauling ore 500 feet through a covered gallery from the main shaft of the mine to the mill.  Once again, her engaging disposition found favor with the miners and even an occasional tourist.  However, nobody was fonder of her than her groom, Ben Smith, a man without a family who fell in love with his charge.

Mary Jane Simpson was far more than a miner’s pet.  According to the Territorial Enterprise (January 23, 1876):

[D]uring the eight months she worked at the Consolidated Virginia mine she hauled nearly $8,000,000 in silver and gold; and during the eighteen months of her underground servitude in the Belcher she probably hauled $10,000,000.  We may then say that during about two years of her life she hauled some $18,000,000…

October 26, 1875 was “The Day Hell Paid A Visit To Virginia City.”  That morning a fire broke out in a boarding house.  Fanned by wind it spread rapidly and burned much of the city.  Numbers are sketchy but the devastation was considerable.  The fire rendered homeless several thousand people, destroyed 200 or so businesses and 2000 buildings, and caused perhaps $10,000,000 in damages.  And it spread to the Consolidated Virginia hoisting works and Mary Jane Simpson’s stable.   Ben Smith, belatedly realizing the mule’s danger, rushed to her aid, but it was too late.  The stable and the mule were in flames.  He attempted to shoot her with a six-gun and end her suffering but was unable to get near enough.  Mary Jane Simpson died a fiery death.

Brokenhearted, he gathered her charred remains and buried her just outside the Masonic Cemetery.  Her grave was marked with a crudely inscribed board.  On June 26, 1993, the present monument was placed on the spot by the Julia C. Bulette Chapter of E Clampus Vitus which quotes the original inscription thus:

SACRED TO THE MEMORY

THE WITHIN WAS ONLY A MULE

STILL SHE WAS NOBODY’S FULE

After her days as a correspondent, Maria Robbins, no longer Mary Jane Simpson, seems to have settled into a comfortable life in San Francisco as the wife of a wealthy businessman.  It is one of history’s ironies that she is remembered in death not as the feisty reporter who stood up to the predatory industrialists of the day, but as the namesake of a lovable mule. 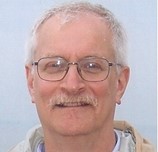 Plus numerous articles in western newspapers in the 1870s and 1880s, especially the San Francisco Chronicle