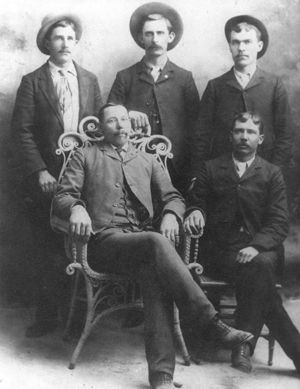 Nine years before Walter Amphiloque Barieau shot and killed an unarmed sheriff on April 7, 1906, outside of the Jewel House in Manhattan, Nevada, his fateful path to that blood-soaked morning was apparent.

Constable Faris had quite a scrimmage with the Barieau household at 1020 N street on Monday afternoon, when he attempted to take possession of some furniture in the house, which was attached by Ingram & Bird.

“The Constable put Thomas I. Acock in charge of the property as keeper, but Barieau, and his wife refused to give up possession of the furniture until 4 o’clock.

“Faris waited until that time, and in the meantime, Barieau went away. No action was taken until 5 o’clock, when Faris again demanded that Mrs. Barieau admit him, which she refused to do. He then broke in a window, crawled into the house and unlocked the door. A truckman was at hand, and the property was carried off.

“By this time Barieau returned, and he was wrathy. He saw a pistol which belonged to him in possession of Faris, and he told the officer that if he was present when he broke into the house the latter would have paid dearly for his raid.”

The incident in Sacramento was one of many tangles Barieau, a professional gambler, would have with law enforcement throughout his life. Yet, one of the assertions advanced during his murder trial the summer of 1906 was that he was a decent man who had never been in trouble before. That unchallenged claim along with many other many tactical advantages his defense team manufactured led to his being acquitted of the shooting death of Tom Logan, a popular three-term sheriff with a wife and eight children.

Shortly before his 45th birthday on April 7, native-Nevadan Tom Logan traveled to the thriving new mining camp of Manhattan, about 40 miles northeast of Tonopah. Besides official business he also sought the company of May Biggs, the proprietress of the The Jewel, “a house of ill-fame.” Just before dawn, Biggs was clearing the last dawdlers from the premises when she came upon Walter Barieau reclined on a lounge in the parlor.

Biggs would later testify at the coroner’s hearing,

I said he should not spoil the fun that they had by keeping me up any longer, or words to that effect. So he got up and when I started out of the door, he went back. His hat was on the table. I thought he would come out for sure. He told me to mind my own business….Then when he took hold of my wrists I went down on one knee and then I screamed. I thought he was going to hit me.”

Upon arriving in the parlor where Biggs and Barieau were at odds, Logan, dressed only in a nightshirt, asked, “What’s all this?” Shortly, Biggs was leading the way down the hall to the front door, Barieau following, Logan behind him. Once outside in the street, Barieau’s temper took hold and he reached under his coat. 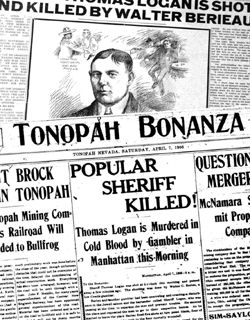 “Don’t pull that gun,” Logan was reported to have said, but Barieau ignored the warning and fired, shattering the glass in the open door. Logan charged Barieau who shot the unarmed sheriff five times. The Manhattan News summarized witness statements in its evening edition:

Upon arising the people in that vicinity witnessed a struggle between two men, both of whom were wet with human gore….An eye witness states that the mortally wounded sheriff prevented a double tragedy in a manner that showed the temperament of the man who crossed the great divide. After Bering [sic] got Logan’s gun he returned and leveled it at the accused and would have pulled the trigger but for the sheriff who waved Bering away and told him not to shoot….

“[Deputy] Scott Hickey testified to having arrived upon the scene of the shooting while Logan and the man under arrest accused of the murder were on the ground. Logan, he declared, was holding Barieau down on the ground, having hold of his hands, in which the latter grasped a revolver. Hickey told of having taken the gun from Barieau and arresting him.”

While Barieau, well-known to law enforcement in California for his hot-headed scheming, cooled his heels in the new jail just opened in Tonopah, Nye County and the grieving Logan family struggled to cope with their loss. The entire front page of the Sun’s April 7, 1906, evening edition was dedicated to the torrent of information related to the killing. Excerpted from an editorial tribute:

A brave man has been laid low in the performance of his duty. All Nye County mourns over the loss of one who was universally loved for his loveable traits and the greatest of those being his bravery. Thomas W. Logan was a naturally constituted man for the office he held. He was without braggadocio. He never talked of his bravery or threatened. He merely performed his duty as it came to him to do and did it with conscientiousness and mere as a matter of course….

“When the most dangerous men were in the act of committing their crimes, instead of girding himself with weapons for a street parade and doing what some sheriffs do to attract attention, Tom Logan was a one of the quietest men in the whole camp and always did his duty quietly and well. He would look down the barrel of a loaded gun without a quiver and he never thought anything of it. A model sheriff, a good citizen, Sheriff Logan was a man who was a benefit to the world in which he lived.” 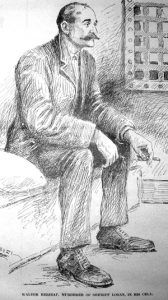 Three months later, the man who narrowly escaped a public lynching in the days following the killing, went on trial. Barieau had two defense attorneys. Stephen Flynn was a seasoned litigator from Michigan and his co-counsel was a young, enterprising attorney from Reno named Patrick McCarran. Together they would launch an ambitious case based on self-defense. That effort focused on eroding Logan’s reputation and discrediting the “red light district” witnesses with McCarran characterizing Biggs, according to one newspaper account, as an “enchantress who had wound herself into the life of a man inclined to do right and making him a slave to her every will and wish.”

Counter to that viewpoint, was an affecting letter Logan had written a month earlier to three daughters away at Business College in Oakland, California:

My Dear Daughters: No doubt you think your Father has forgotten you, but I have not. I have been away far from home for a long time, after jurors and witnesses. This County is getting so lively now that it keeps me going day and night….I am trying to shape up for the rest of the family to come down by the middle of next month, although they don’t know it, as I expect $500 by the 10th of April and if it comes and will, I will give it to your mother to go and spend, and give her a chance to see something. Do not say anything to her about it because sometimes these things fall through but I don’t think that this will….We will come out all right—before this summer is over your Father has some chances to make money that he never had before. I enclose $50 and will send more before long with all kinds of love to you all, I am your affectionate Papa.”

After 17 hours of deliberation, on the morning of July 13, 1906, the jury announced a “Not Guilty” verdict. Walter Barieau walked from the courtroom a free man, and the dark cloud of shame gathering over the Logan family billowed in proportion, destined to follow them for decades to come.

Even though Stephen Flynn was Barieau’s lead counsel, it was Patrick McCarran’s popularity that soared and he became one of Nevada’s most prominent and controversial U.S. Senators. In his own unpublished biography he cites the Barieau acquittal or “The McCarran Miracle” as being instrumental in his rise to political power. He makes no mention of Flynn who, three years after the Barieau trial, hung himself in the closet of a San Jose, California, rooming house. An excerpt from a letter written to his wife and daughters offered some haunting insight:

My frame of mind may be described as that of complete resignation to what I at this moment believe to be my fate, inevitable fate. Were I upon the scaffold with the black hood drawn over my head I could not be better convinced of the fact, and I believe that I am immeasurably more resigned than I would be if I occupied the latter position…. and I am prompted to make my exit with a feeling of charity, if, not indeed, love in my heart for every human being.” 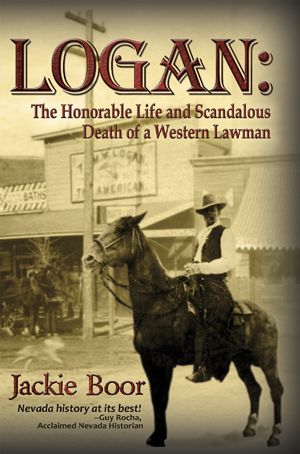 Following his acquittal, Walter Barieau, his wife and daughter boarded a steamship to Panama and left the country. In later years, he is reported to have once managed a casino in Mexico for Jack Dempsey, worked as a bodyguard for the infamous Nevada political boss George Wingfield, and won and lost several fortunes in the gaming industry.

Barieau, whose own father had been acquitted of killing his pregnant wife, died penniless and alone in San Diego at the age of 84 on July 4, 1953. To this day, rumors persist as to whether or not the hot-headed gambler was actually hired to kill Logan—a possibility for certain, but most likely to remain an eternal mystery.

NOTE: On May 28, 2011, 105 years after Sheriff Tom Logan was killed in the line of duty, then Nye County Sheriff Anthony DeMeo posthumously awarded him a Purple Heart and Medal of Valor—noting it mattered not if Logan had been shot on the steps of a brothel or a church, he had acted in the interest of public safety and in so doing had made the ultimate sacrifice as an officer of the law.

Jackie Boor began her freelance writing career in 1968 as a teen correspondent for two Northern California newspapers. Her first major work, the award-winning memoir of LTC Gene Boyer, was published in 2010, and is titled “Inside the President’s Helicopter: Reflections of a White House Senior Pilot“. A resident of Sacramento, CA, Jackie began researching Nevada Sheriff Tom Logan, her great-grandfather, in 1985 and spent nearly 30 years gathering content for “LOGAN: The Honorable Life and Scandalous Death of a Western Lawman“, published in 2014.

An accomplished public speaker and workshop presenter, Jackie also enjoys gardening, golf and spending time with her family—both those in the present and from the past.