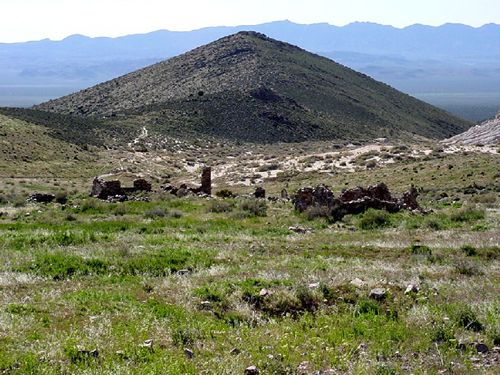 When gold was discovered in 1889 in Monkeywrench Wash by John Ferguson and Joseph Sharp, gold and silver seekers rushed to the isolated and treeless region. Before long a mining camp was born west of the Monkeywrench Mine and called Ferguson after one of the original prospectors.

In April 1894, Captain Joseph Rafael De Lamar of Montana bought most of the important mines in the area and renamed the Ferguson camp, Delamar. In the same year, a newspaper called the Delamar Lode began publication and a post office was opened. Lamar built a fifty-ton mill which commenced operation in May of 1895 and the camp began to grow.

Soon, the new settlement boasted more than 1,500 residents, a hospital, an Opera House, a couple of churches, a school, several businesses, and the numerous inevitable saloons. Most buildings were built of native rock and though the camp has long since been a ghost town, the ruins of these timeless buildings continue to stand.

By 1896 the Delamar mill was handling up to 260 tons of ore daily. Water for the camp was pumped in from a well at Meadow Valley Wash, some twelve miles away. Supplies and materials traveled even further, by mule teams over mountainous terrain from the railroad head at Milford, Utah, 150 miles from the remote camp. The precious ore was hauled out of the settlement in the same arduous manner. 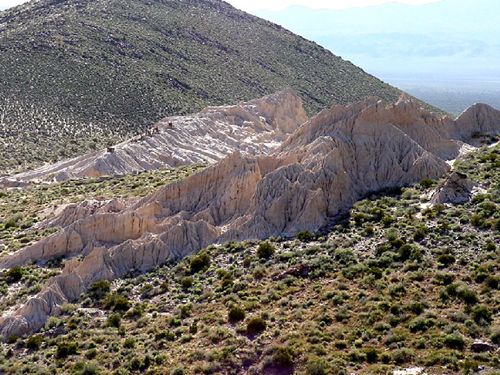 The quartzite dust at Delamar created these interesting unnatural sculptures in the mining district, by Kathy Weiser-Alexander.

The gold in the Delamar mines was unique in the fact that it was contained in quartzite. The process to remove the gold from the quartzite resulted in large quantities of dust that contained particles of glass-like rock. This hazardous dust, when breathed by the mineworkers, as well as the townsfolk, often resulted in a disease of the lungs called silicosis. Soon, the town earned the nickname “The Widowmaker” due to the numerous premature deaths from the disease. At one time there were over 400 widows living in Delamar. Today, Delamar’s two remaining cemeteries display the inscriptions on tombstones of the many victims of the quartz dust.

After the turn of the century, gold production slowed and by 1902 many of the town’s residents had moved on to the new boomtown of Tonopah.

More than $15 million dollars worth of gold was produced from 1892 to 1909 when Captain John R. Delamar dismantled the entire enterprise. Inevitably, the town died. However, Delamar saw a revival in 1929 when production began once more. The post office and school were reopened but it was not to last. Production ended once more in 1934 and the town died for good. 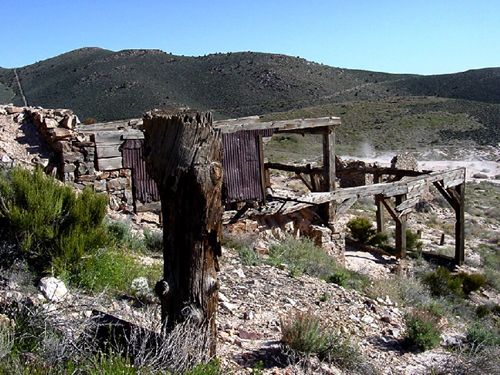 Weather and vandals have taken a toll on the remains of Delamar. Only a few years ago several of the old stone buildings remained standing, but according to an area resident, these buildings have sadly been taken apart, stone by stone, by vandals hoping to find something hidden in the walls. However, these crumbling ruins, tailings, and old mine structures still entice ghost towners and photographers to its remote location.

Directions: From Las Vegas take I-15 north to Great Basin National Park/Ely Cut-off – Highway 93. Just a few miles before you get to Caliente, Nevada is the Delamar Road to the right. The drive to Delamar is about 16 miles on a rugged gravel road. Four-wheel drive is recommended.