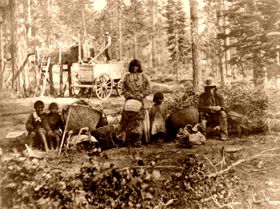 An indigenous Native American people, the Washoe originally lived around Lake Tahoe and adjacent areas of the Great Basin. Their tribe name derives from the Washoe word, waashiw (wa·šiw), meaning “people from here.”

Semi-sedentary hunters and gatherers, their territory extended from the western slope of the Sierra Nevada Mountains to areas as far east as Pyramid Lake in Nevada, including Lake Tahoe and the upper valleys of the Truckee, Carson, and West Walker Rivers. Traditionally, they would spend their summers in the Sierra Nevadas, the autumn in the ranges to the east, and winter and spring in the valleys in between. Their food base consisted primarily of pinyon pine nuts, roots seeds, berries, and game.

Family was and is the core of the Washoe because these are the people that lived and worked together and relied on each other. In the past, families are recorded as rarely fewer than five individuals and only occasionally exceeding twelve in size. A family was often a married couple and their children, but there were no distinct rules about how marriages and families should be formed and households were regularly made up of the parents of a couple, the couple’s siblings and their children, more than one husband or wife, or non-blood related friends.

Generally, a family was distinguished by whoever lived together in the winter house. Winter camps were usually composed of four to ten family groups living a short distance from each other. These family groups often moved together throughout the year. The Washoe practiced sporadic leadership, so at times, each group had an informal leader that was usually known for his or her wisdom, generosity, and truthfulness. He or she may possess special powers to dream of when and where there was a large presence of rabbit, antelope and other game, including the spawning of the fish, and would assume the role of “Rabbit Boss” or “Antelope Boss to coordinate and advise communal hunts.

The Washoe were traditionally divided into three groups, the northerners or Wel mel ti, the Pau wa lu who lived in the Carson Valley in the east, and the Hung a lel ti, who lived in the south. These three groups each spoke a slightly different yet distinct variant of the Washoe language. These groups came together throughout the year for special events and gatherings. Individual families, groups, or regional groups, came together at certain times to participate in hunting drives, war, and special ceremonies. During their yearly gathering at Lake Tahoe, each of the three regional groups camped at their family campsites at the lake. A person might switch from the group that they were born into to a group from another side of the lake. There were often cross-group marriages, sometimes even between the Paiute and the California tribes.

Relations with other tribes bordering Washoe territory were mostly about tolerance and mutual understanding. Sometimes events lead to tensions and warfare. It was beneficial to both sides to keep their distance, but they also needed to maintain a relationship to exchange trade goods.

They were first driven into the area from the east by their long-time enemies, the Northern Paiute, by whom they were later dominated. After soundly defeating the Washoe, the Paiute, who had obtained and learned to ride horses, would not allow the Washoe to own or ride their own mounts.

When white trappers and explorers began to make their way into their territory, the Washoe did their best to avoid them. They had heard about the new intruders before they ever saw one. As the Spanish invaded the California coast to establish missions and convert Indians to Catholicism, the Washoe began to make fewer and fewer trips to the west coast until eventually, those trips stopped altogether. Neighboring tribes that escaped into hiding in the high mountains probably warned the Washoe about the invaders.

Although White historians have concluded that the Spanish never entered Washoe territory, the Washoe have told stories about them for generations, and some Washoe words, including names for relatively new additions to the Washoe world, like horse, cow, and money, are similar to the Spanish terms. 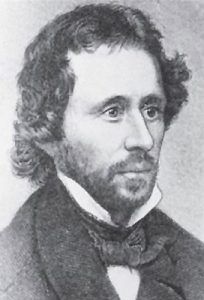 When the first white fur traders and surveyors began to enter Washoe territory the Indians approached the newcomers with caution. They preferred to observe the intruders from a distance. The first written record of non-Indians in Washoe Land were fur trappers in 1826; they may have met the Washoe, but left no description of the encounter. The first written description of the Washoe was by John Charles Fremont in 1844, who was leading a government surveying expedition. Fremont described the Washoe as being cautious of being close to them, but in time, when he showed no aggression, the Washoe came forward and gave him handfuls of pine nuts. Fremont described struggling through deep snow and being impressed by the Washoe’s skill with snowshoes. The Washoe willingly shared their knowledge of the land and eventually guided Fremont to a safe passage to California.

As more and more colonizers began infiltrating Washoe land, it was not long before relations grew hostile. The summer of 1844, just a few months after Fremont had passed through, a group of trappers left record of having shot and killed five Indians (either Washoe or Paiute) for having taken traps and perhaps horses. The Indians probably took those things in order to discourage the trappers from entering their land. After the deaths, the trappers searched the area, but not surprisingly found no more Indians. Most westward-migrating settlers had been conditioned by their experiences passing through the country of aggressively defensive tribes of the Great Plains and saw no distinction between different tribes. They expected the Washoe to be violent and dangerous and projected these characteristics upon them.

In 1846, the Washoe noticed the famed Donner party wagon train because they had never seen wagons before. They described seeing the wagons and wondering if they were a “monster snake”. In route to California, the Donner party reached the Sierras late in the year and got trapped in snow for a particularly harsh winter. The Washoe checked in with the stranded travelers a few times and brought them food when they could. Even so, in the face of suffering and starvation, the Donner Party resorted to cannibalism. When the Washoe witnessed them eating each other they were shocked and frightened. Although the Washoe faced hard times every winter and death by starvation sometimes occurred, they were never cannibalistic. Stories about the situation, some gruesome and some sympathetic, were told for many generations and were said to have added to the general mistrust of the white people. 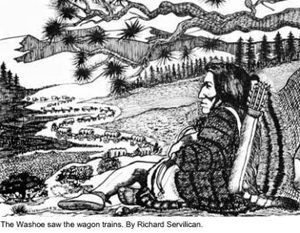 In 1848, gold was “discovered” in California, and although until then, most of the Washoe had never seen white people, or had previously avoided them, this soon became impossible. The wagon trains came by the hundreds, and because most of the wagon trails had previously been Indian trails, encounters were numerous. Most of the new people were just passing through, but by 1849, several began to establish seasonal trading posts in Washoe territory.

By 1851, year-round trading posts were established, and colonizers became permanent residents on Washoe land. The settlers often chose to live on some of the most fertile gathering areas that the Washoe depended on. A few years after gold was found in California, silver was “discovered” in the Great Basin and the “Comstock Bonanza” lured many miners that had passed through back into Washoe territory.

The Euro-American perspective viewed land and its resources as objects of frontier opportunity and exploitation. In a short time, the colonizers had overused the pine nuts, seeds, game and fish that the Washoe had lived harmoniously with for thousands of years. By 1851, Indian Agent Jacob Holeman recommended that the government sign a treaty with the Washoe and wrote, “…the Indians having been driven from their lands, and their hunting ground destroyed without compensation, therefore – they are in many instances reduced to a state of suffering bordering on starvation.” All this happened in less than ten years after Fremont had passed through Washoe territory.

Settlers and miners cut down trees, including the sacred Piñon Pine to build buildings, support mine shafts, and even burn as fuel. The Piñon Pine woodlands that had once provided the Washoe, other tribes and all the animals with more than enough nuts became barren hillsides.