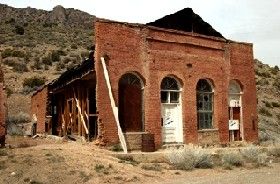 A once thriving mining town, Tybo, Nevada was “discovered” in 1866 when a local Indian led white settlers to the site where he had discovered gold ore. Though these prospectors did their own digging, the main lode that would eventually establish the mining camp wasn’t discovered until 1871.

A smelter was built in 1872, but it would take several years before the town was officially established in 1874. Named Tybo, for a word derived from the Shoshone, meaning “white man’s district,” the settlement really began to boom the following year when the Tybo Consolidated Mining District was formed.

Controlling three major mines near the camp, the town soon reached its peak population of about 1,000 residents in 1876 and boasted a school, a post office, a newspaper, Wells Fargo office, a bank, several retail businesses, and numerous saloons.

Though the settlement started out as a quiet community, this would change when the camp began to experience racial problems. Filled mostly with European immigrants, the difficulties began when the company that owned the charcoal burners hired Chinese workers to cut the wood that fired the charcoal kilns. 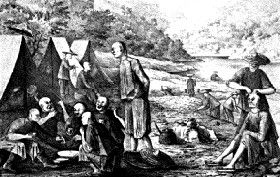 As in many mining camps of the west, the white settlers did not like the Chinese and angered by the many who had “invaded” their camp, heated talk, with the help of flowing liquor, started in the saloons. Before long, they began to retaliate against the Chinese with words, fists, knives, and guns, leading to a number of nameless graves in the cemetery.

The frenzy continued until it culminated in a drunken mob storming the sleeping camp of the Chinese workers with cracking bullwhips and blazing guns. Fleeing for their lives, the Asians hid in the hills until their employers rounded them up and put them back to work under the watchful eye of armed guards. The miners again threatened to storm the Chinese camp, but this time they gave the charcoal company an ultimatum – get rid of the Chinese in 24 hours or they would kill them. This time the Chinese fled for their lives.

In 1881 the Tybo Consolidated Mining Company failed when the quality of ore dropped dramatically and by the end of the year, Tybo’s population had been reduced to only about 100 people. Just three years later, in 1884, much of what was left of the once prosperous community was destroyed by a disastrous fire that leveled 32 buildings.

Over the years, numerous mining companies attempted to resurrect the mining operations, but all failed with the last mill closing in 1937. The last known miners known to work the area were a group of eighteen men who hauled old tailings to Tonopah in the years 1942-1945. 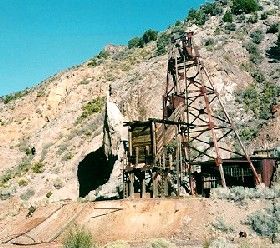 All in all, the district’s silver, lead and zinc production netted some $9.8 million in valuable ore during its production years.

Though a handful of people still make their homes in Tybo, today the settlement is a ghost town with its few remaining once-prosperous businesses standing in stages of ruin. That being said, Tybo offers a number of picturesque photo opportunities for the ghost town enthusiast, including the town’s old general store, with its imposing brick front and arched windows. Many other original buildings, cabins, charcoal kilns, and a cemetery can also be seen. In the hills near the town, nothing remains of the mills but foundations, however, mines continue to dot the landscape. A few shafts remain uncovered so hikers should take care. We should note that most of the buildings and land are now private property, so be respectful and take pictures from the road.

Tybo is in Nye County, approximately a 17-mile drive from Warm Springs, Nevada. From Warm Springs, take Highway 6 northwest to Toiyabe Basecamp Road and turn left, follow to Tybo. Some portions of the road are unpaved.