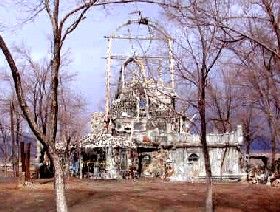 Out in the middle of nowhere south of Interstate 80 near Imlay, Nevada is a huge conglomeration of quirky sculptures made of all manner of collected items including old cars, bottles, railroad ties, machinery, wheels, and a bucket load of concrete.

Constructed over four decades beginning in 1967, a man named Frank Van Zant, built the folk art “sculpture” of concrete and junk as a tribute to the Native American plight.

Frank Van Zant, who had some Creek Indian heritage came from Oklahoma. After serving in WWII, he came to Nevada and worked at various jobs including logging, mining, truck driving, and as a preaching minister.

Somewhere along the line, Van Zant met an old medicine woman who told him, “In the final days, there shall rise up a place called Thunder Mountain.” She said that only those who lived at Thunder Mountain would survive the apocalypse.

It was after this talk with the medicine woman that Van Zant changed his name to Chief Rolling Mountain Thunder. Before long he moved his family to the desert and began to build the monument. From a nearby junkyard came a treasure trove of building supplies, such as farm equipment, typewriters, car hoods, and wheels.

When Van Zandt was alive he lived in the three-story house, built of bottles and concrete, with his family. From the roof, spires and pretzels of painted concrete shoot out in all directions, culminating in a dome skeleton. The windows of the house are made from automobile windshields. 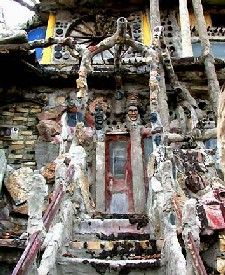 Through the years Chief Thunder and his friends erected several unusual buildings from roadside junk and boards and metal from abandoned buildings.  With the enormous quantities of concrete used, Van Zandt calculated that his fantastic home would stand for a thousand years.  Elsewhere on the property are concrete totem poles, rusted refrigerator doors serving as billboards for political statements, baby doll heads stuck on tree branches, and blue glass pole insulators everywhere.

Chief Thunder continued his work on the site until 1989.  At the age of 69, he committed suicide, some say because he had completed his masterpiece.

Though Thunder Mountain has been designated a Nevada State Historic Site and a National Monument, it has suffered from neglect and vandalism since Chief Thunder is no longer there to look over it.  His son, Daniel Van Zant has led an effort to save the site and some repairs have begun to be made on the property.

The main home is no longer occupied and there are no park rangers or tour guides at the site.  When you visit, be sure to leave a donation in the big metal box at the beginning of the walkway that takes you on a tour through the grounds.

Thunder Mountain Park is located between Winnemucca and Lovelock off I-80, about 120 miles east of Reno, Nevada.