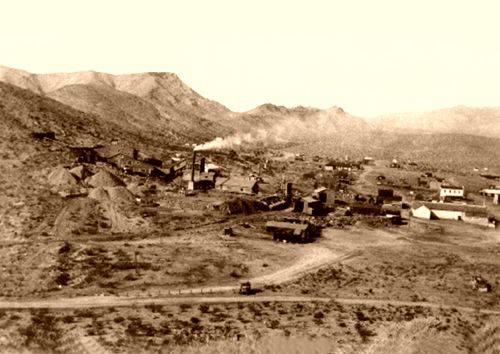 “Things are quiet here, if people keep on moving away this ain’t going to be nothing but a damned ghost town.” — Sam McClanahan, from Ghost Towns of the West by Lambert Florin, 1970.

The natural springs and the area that surrounds what is now Goodsprings, Nevada was first used by the Ancient Puebloans, and then the Paiute Indians. The springs were first documented by white settlers in 1830 by a caravan that traveled along the Old Spanish Trail. Mining first occurred around the area in 1856 when Mormons established a lead mine at nearby Potosi, the oldest lode mine in Nevada.

Though a small oasis in the desert, no settlement would be founded until after Joseph Good discovered silver near the springs in 1861. Good, who was primarily a cattleman, would establish a small store, but a town would not be established until more silver and lead deposits were discovered around 1868. First called Good’s Springs, the name later evolved to Goodsprings.

By 1882 gold had also been discovered and the Goodsprings or Yellow Pine Mining District was established. Later more gold would be found, with the Keystone Mine, about 5 miles west of Goodsprings, being the most profitable. In 1893, a post office was established at the Keystone Mine and the area supported about 200 people, just a few stores, and numerous small mines dotting the landscape.

In 1893, the first post office was established at the Keystone Mine, which also had the distinction of being taken over by the miners two years later in a dispute over wages. The miners held the mine for three months until enough money had been made to pay both their wages, as well as the wages for local Indians who had been cutting wood for the mine.

In 1897 the post office at the Keystone Mine closed. In the meantime, Joseph Good had sold his store to a man named Samuel Yount, who established a new post office in Goodsprings in 1899. He served as the postmaster from that date until 1914.

In 1901, the Yellow Pine Mining Company was formed, which consolidated ownership of most of the area mines and built a mill. But getting the ore out of the area was a difficult job, as it had to be hauled by wagon to distant shipping points. However, when the San Pedro, Los Angeles & Salt Lake Railroad built a line through nearby Jean in 1905, the task of moving the ore became much easier.

The township was officially platted in 1904, and gradually its tents and shacks were replaced by more substantial buildings. With the coming of the railroad to Jean, the Yellow Pine Mine then began to increase production and built a narrow-gauge railroad from the remnants of the railroad line which had served the Quartette Mine in Searchlight. Though the spur to Goodsprings would take several years to build, when it was complete in 1911, it hauled tons of ore from Yellow Pine’s 100-ton mill to Jean. With transportation problems eased, the town really began to grow. 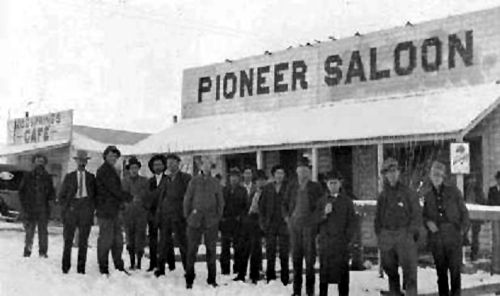 George Arthur Fayle, an ore hauler from Calico, California, moved to nearby Goodsprings Junction (later changed to Jean, for his wife) in 1904. With financial help from his uncle, Samuel Yount, who owned the mercantile store in Goodsprings, Fayle established a tent store for miners and ore-hauling businesses.

Later, he bought an interest in his uncle’s store in Goodsprings and the name was changed to the Yount and Fayle Store. In 1912, Fayle moved his family to Goodsprings and began to expand the business. In 1913, he built the still operating Pioneer Saloon.

That same year, a permanent school building was erected, which continues to stand. Now on the National Register of Historic Places, it is the oldest school in Clark County that was built and still used as a school.

The community prospered, reaching its peak population of about 1,000 people in 1915. The following year, George Fayle, built the Fayle Hotel, the most luxurious hotel in the area, providing for 20 guest rooms, electric lights, hot and cold running water, steam heat, and a restaurant that boasted fine dining. Advertised as the “finest hotel in the west,” it opened with a grand ball on May 13, 1916. The hotel and restaurant were initially so successful, Las Vegas residents would make a trip to Goodsprings to enjoy the hospitality. However, Fayle’s uncle, Samuel Yount, objected to the building of the hotel, predicting that it could not survive. Unfortunately, Yount’s prediction would not only be correct but would also result in the end of their partnership. The hotel that was located about 100 yards west of the Pioneer Saloon would eventually be a financial failure and in 1966, the building burnt to the ground.

Two years later, on May 20, 1918, the Goodsprings Gazette was established by Frank A. Doherty. The four-page weekly newspaper continued after the founder’s death less than a year later, then operated by his wife, Florence, continuing to deliver to its 350-400 subscribers until 1921.

George Fayle also built the Fayle Department Store and, convinced the town would continue to be a success, actively promoted the settlement. Though all his ventures, other than the Pioneer Saloon, would eventually fail as the town began to decline, Fayle would not be around to suffer the humiliation. On  December 9, 1918, he succumbed to the Flu epidemic which was sweeping the United States and western Europe and was buried in the Goodsprings cemetery, where he is still the largest headstone. 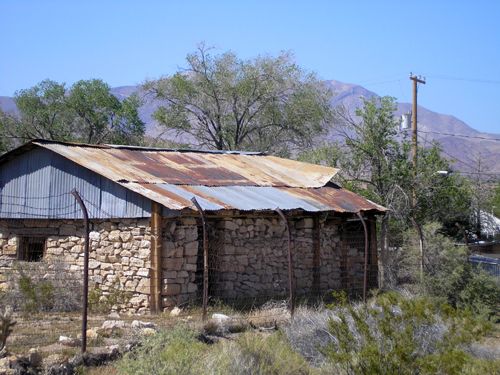 The oldest building in Goodsprings, Nevada

By the time Fayle died, Goodsprings was called home to about 800 people, several businesses including a number of stores, several restaurants, nine saloons, a post office, a school, the grand hotel, a hospital, and a weekly newspaper. The town was so much larger than  Las Vegas, those residents traveled to Goodsprings for their shopping and entertainment needs.

The town continued to thrive through the end of World War I, when lead and zinc was badly needed for the war efforts. However, when the war ended in 1918, production decreased, mines shut down, and the town began to decline. By 1920, only about 400 people called the townhome. Goodsprings once again saw a spurt of activity during World War II, but never grew to its former size. In 1930, the narrow gauge railroad to Jean ceased operations and four years later, in 1934, the railroad tracks were removed. By that time, the vast majority of the mines sat silent, and Goodsprings was on its way to becoming a ghost town, with less than 100 residents.

However, during its heydays, the Yellow Pine Mining District earned over $30 million from lead, gold, copper, and zinc, providing for 1/3 of the total metal production for Clark County, making it one of the most lucrative mining districts in Southern Nevada.

In January 1942, Goodsprings became the local site of another bit of excitement when actress Carole Lombard, her mother, 15 army fliers, and the crew of a TWA Skysleeper, returning from Indiana to California, crashed into the snow-packed Potosi Range. All 22 people on board were killed. 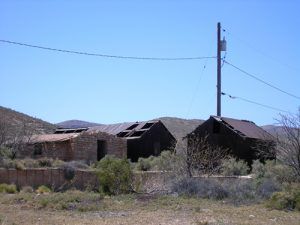 At the foot of the range, Lombard’s husband, actor Clark Gable, stayed at the Fayle Hotel and consoled himself in the Pioneer Saloon while awaiting news of his wife’s fate and holding out faint hope for her survival.

Today, a number of residents still live in Goodsprings, some in restored buildings and others in mobile homes or newer structures. The community continues to boast the still operating Pioneer Saloon and the Goodsprings General Store next door. The Pioneer Saloon sports its original long cherry wood bar that was brought down from Rhyolite, Nevada, which had already become a ghost town at the time that the saloon was built. The old pot-belly stove in the saloon, said to date back to Civil War times, is still used. Both the saloon and the general store are sheathed in pressed metal, which resembles bricks.

In the Memorial Room of the saloon, the walls are covered with old newspapers and photographs of the town’s history, including the fatal airline crash that took Carole Lombard’s life.

Across the highway can be seen a couple of rusting tin buildings, an old stone structure, and a large foundation, and the ruins of the Yellow Pine Mill. To the west, several more buildings continue to stand including the first permanent building in Goodsprings, the A.G. Campbell cabin, which dates back to 1886. Also standing is the 1913 school, which continues to serve students today, as well as the post office, an 1890’s wooden cabin, a church, and numerous old homes and buildings that stand in various states of disrepair. 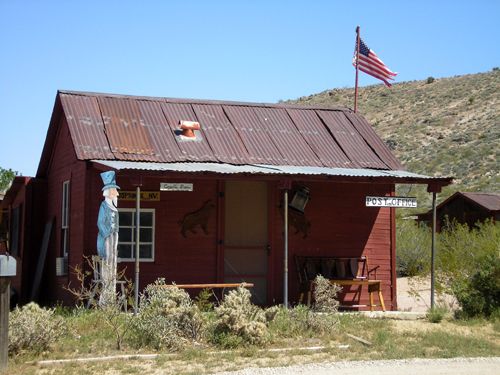 East of Goodsprings on State Road NV-161 on the north side of the highway lies the town’s cemetery.

Today, Goodsprings’ some 200 residents, many of whom are Las Vegas commuters, enjoy a quiet lifestyle in this once-thriving desert town.

To reach Goodsprings from Las Vegas, travel southward on I-15 to the Jean-Goodsprings exit, then turn west on Nevada Highway 161 for seven miles. 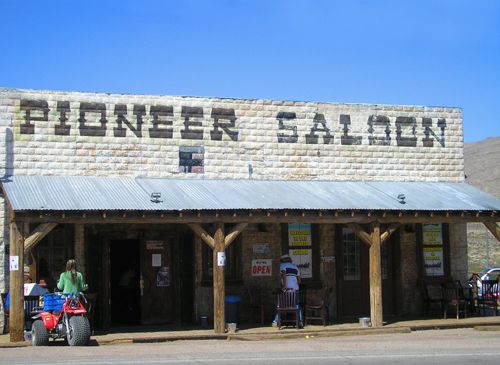