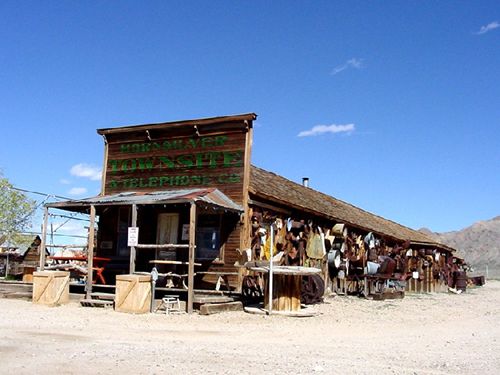 The area that would become Gold Point, one of Nevada’s best ghost towns, was first settled by ranchers and a few miners around 1880. A small camp was formed a few hundred yards west of the present-day townsite at an outcropping of limestone and was called Lime Point.

When new discoveries of both gold and silver established the major mining towns of Tonopah and Goldfield, Nevada in the early 1900s, a flood of prospectors returned to the old Lime Point mining camp to try their luck.

In 1902 silver was discovered in the area and within no time, the old camp was revived and renamed Hornsilver for a particularly rich source of ore.

At this time, the scarcity of water in the area required that the ore be shipped to nearby Lida for milling. The only major supply town was about 250 miles north of a town called Unionville, a major mining town northeast of present-day Lovelock.

When the miners didn’t find the silver in the abundance that they had hoped, the costs of shipping the ore to Lida became too prohibitive and within a year, the early settlement was abandoned.

However, in 1905, the Great Western Mine Company began operations about a half mile southeast of Hornsilver and before long, discovered a rich silver vein which brought a stampede of miners back to the camp. In addition to the rich silver ore, gold was also mined in limited quantities. By 1908, the tent homes turned into more permanent wooden structures and the camp became a town.

In May 1908 the Hornsilver Herald began publication and the following week a post office was established. Before long the residents organized a Chamber of commerce and numerous businesses sprouted up, including as many as 13 saloons. The Chamber began to actively pursue a railroad extension to Hornsilver; however, that would never occur, the nearest railroad depot being at Ralston, some 15 miles east of Hornsilver. As deep ore bodies were extensively developed, the town peaked at a population of around 1,000 with over 225 wood-framed buildings, tents, and shacks throughout the camp.

Unfortunately, the town’s original founders didn’t find the boomtown they had hoped for, as this strike also proved to be short-lived. In 1909, litigation due to claim jumping brought many of the area mining properties into the courts. These many lawsuits, along with inefficient and costly milling practices halted the town’s growth just a little more than a year after it was established. Before long, most of its businesses closed and its residents again moved on. 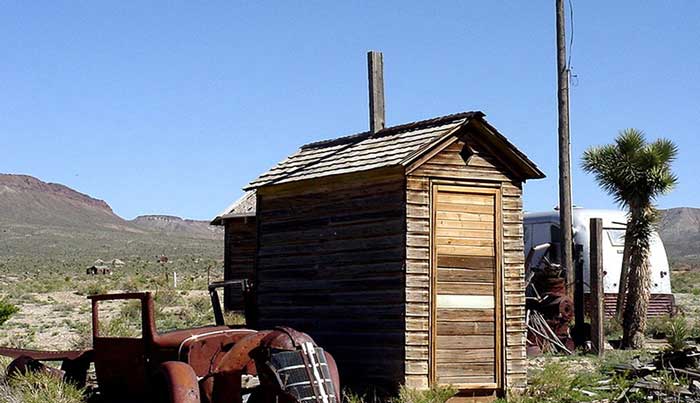 An outhouse in the midst of former flory in Gold Point, Nevada

But, Hornsilver was not yet destined to die, as mining operations resumed again in 1915. However, it must not have done very well as Charles Stoneham, of the New York Giants baseball team, purchased the Great Western mine in 1922 at a receiver’s sale.

In 1927, a miner by the name of J.W. Dunfee went down the mine and made an even better discovery – gold! Within a few years, more gold than silver was being mined and the town’s name was changed to Gold Point. It was after this discovery that Gold Point enjoyed its longest period of success, at a time that the rest of America was suffering from depression. 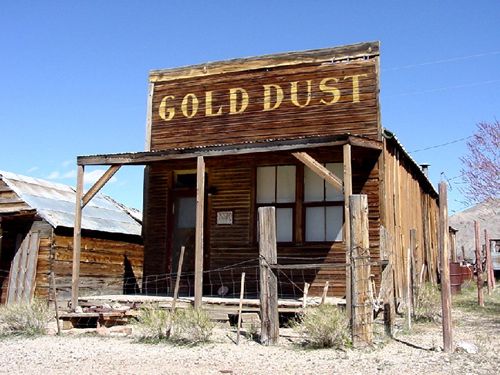 However, when World War II began, mining resources were severely restricted to those mines extracting strategic metals. This resulted in gold mining efforts coming to a standstill in Gold Point and once again most of its residents drifted away or went off to war.

After the war, mining resumed on a smaller scale and continued until the 1960s until a cave-in occurred from a dynamite blast at the Dunfee Shaft. More expensive to fix, than the quantity and value of ore extracted would pay, the mine was closed. Other than a few small leases and diggings, this was the last serious mining operation at Gold Point.

After the closing of the Great Western Mine, the town officially became a “ghost” but was watched over by a long time resident named Ora May Wiley and the few remaining residents.

Ora came to Gold Point around 1930 and married Harry Wiley, one of the founding fathers of Hornsilver. Staying until her death, at the age of 83 in 1980, Ora ran the Post Office from 1940 until 1967. The couple also operated a general store and Standard Gas Station. Harry Wiley served on the Esmeralda County Board of Supervisors from 1940 until he was elected to the Nevada State Senate in 1946, where he served until his death in office in 1955.  In 1967, the post office closed forever but now stands as a testament to this once flourishing town, seemingly frozen in time.

Today, the town is called home to only about a dozen residents, who have privately restored and preserved the town. Spearheaded by a man named Herb Robbins, who moved to Gold Point in his mid-twenties, the old town has seen many needed repairs and improvements, all of which are due to the hard work of its few residents, friends, and supporters.

Many of the cabins in the town appear as they did nearly one hundred years ago and are sometimes rented out in a bed and breakfast fashion. The centerpiece of Gold Point is its 110-foot long saloon, lined with historical artifacts on the outside, and boasting a Player Piano and shuffleboard on the inside. The saloon, along with the post office and several other restored buildings line its tiny historic main street. 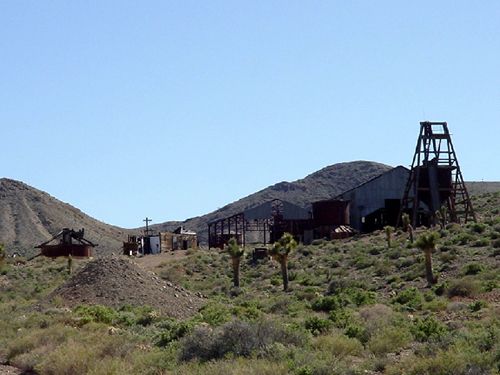 On Memorial Day, Independence Day, and Labor Day weekends, Gold Point “opens its doors” to welcome hundreds of people for festive weekends including all kinds of food and activities. Herb Robbins portrays “Sheriff Stone” on these weekends entertaining the many guests and corralling the rowdies. Gold Point has also become a popular place for weddings as Sheriff Stone and his girlfriend Sandy, really put on a great ceremony. Sandy is a licensed Minister who can legally conduct weddings in Nevada.

Restoration, ongoing since the late 1970s continues in this old settlement and two museums are available to the public on most weekends.

When you visit, keep in mind that the entire town is privately owned and though you may not see its few residents, rest assured that they watch over their property, keeping a close eye on visitors to ensure that its many artifacts remain exactly where they are.
During its heyday, Gold Point produced more than a million dollars in gold and silver, with the Great Western Mine extracting more than $500,000 in gold.

Gold Point is about 40 miles southwest of Goldfield off of highway 95. Turn west onto NV 266, then south onto Lida Road to arrive at Gold Point. 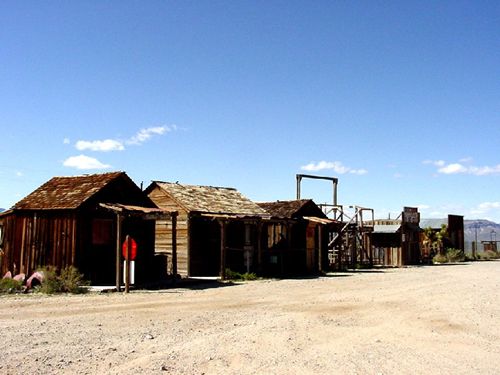