Stretching between Crystal Springs and at Warm Springs, Nevada for about 98 miles, the Extraterrestrial Highway, officially known as State Route 375, closely parallels the northern edges of the Nellis Air Force Range, commonly known as Area 51. 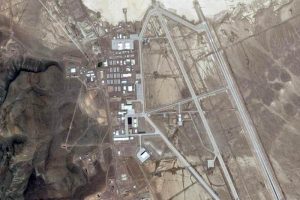 For years, the area has become a focus of modern conspiracy theories due to its secretive nature and connection to classified aircraft research. The facility, located within the Nevada Test and Training Range, is officially called Homey Airport or Groom Lake, after the salt flat situated next to its airfield. The entire testing range, covering some three million acres, roughly the size of Connecticut, is the largest contiguous air and ground space for peacetime military operations in the free world.

Details of the facility’s operations are never made public, and in fact, the secret base’s existence was not even publicly acknowledged until 2013. The United States Air Force acquired the site in 1955, primarily for flight testing the Lockheed U-2 spy plane. The Air Force says that it is an open training range, and it is commonly thought to support the development and testing of experimental aircraft and weapons systems. Though the facility has never been declared a secret base, all research, and events in Area 51 are Top Secret/Sensitive Compartmented Information. 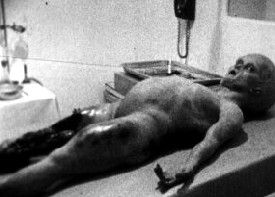 The intense secrecy surrounding the base has long made it the subject of conspiracy theories, especially regarding UFOs.

Some of the theories include:

Somewhere amid Area 51’s vast desert acreage is a heavily guarded underground lab where the government keeps and studies captured alien aircraft and possibly even aliens themselves.

The examination and reverse engineering of crashed alien spacecraft. 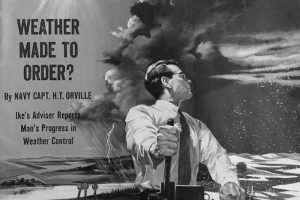 The manufacture of aircraft based on alien technology.

The development of weather control.

The development of time travel and teleportation technology.

Activities related to a shadowy one-world government or the Majestic 12 organization that appears in many UFO conspiracy theories.

Some even believe that the U.S. government filmed the 1969 moon landing in one of the base’s hangars.

The belief that Area 51’s “military base” is a cover for alien research has been encouraged by pop culture over the years. 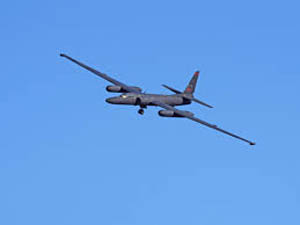 Many of these beliefs began in the 1950s when some of the most important spying aircraft in American history were assembled, tested, and ultimately sent out on missions. This began when the military began testing the U-2 CIA spy planes in 1955.

During that time, a number of people reported seeing UFOs at the southern Nevada military base.

On June 17, 1959, the Reno Evening Gazette published a story with the headline “More Flying Objects Seen In Clark Sky,” and described how Sergeant Wayne Anderson of the local sheriff’s office was among several locals who spotted an unidentifiable object that was “bright green in color and descending toward the earth at speed too great to be an airplane.” 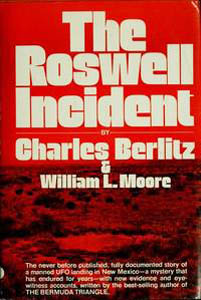 In 1980, Charles Berlitz and William Moore published a book called the Roswell Incident, alleging that the government covered up the crashed “flying saucer” by calling it a weather balloon. Though the book didn’t mention Area 51, many soon surmised that the base was where the material was taken to be studied.

Conspiracy theories gained support in 1989 when an engineer named Bob Lazar claimed to have worked on alien spaceships and viewed saucer test flights in Tikaboo Valley. After telling his story to a Las Vegas television station that subsequently broadcasted it as an exclusive report, the rumors grew more rampant.

By the 1990s, stories of the top-secret U.S. government base at Area 51 had become mainstream, and many books and personal accounts were published regarding extraterrestrial spacecraft and alien activity in the region surrounding Groom Lake.

These many stories prompted the State of Nevada to officially designate the route as the Extraterrestrial Highway in 1996. When news of the highway’s renaming reached Twentieth Century Fox, the studio used the opportunity to promote the release of the film Independence Day, whose plot involves an alien invasion and the secret facility at Area 51. 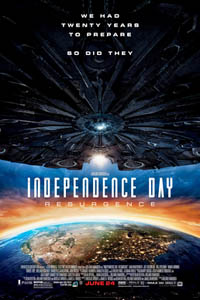 While the area had long attracted spectators, the highway soon became a tourist attraction with several stops, recognizing spaceships and “little green men” that just might be inhabiting the area.

The highway begins, traveling from the east at State Route 318 and Route 375 at the northern end of the Pahranagat Valley. Here is the site of Crystal Springs, a ghost town that was once important enough to become the Lincoln County seat. Today it displays just a few area homes, many trees, and functions as a rest stop.

Just to the southeast, at the corner of Highway 93 and State Route 318, is the ET Jerky Shop. Here, you can find numerous flavors of fresh-made jerky, as well as dried fruit and nuts to sustain you through your stranger-than-fiction adventure along the highway. It also displays a great extraterrestrial mural for photo opportunities. 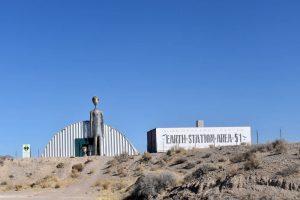 Less than a mile to the northwest is the official ET Highway sign, and just beyond that is the civilian-run Alien Research Center on the north side of the highway. You can’t miss the gleaming silver Quonset hut with a giant two-story silver alien at its front door. Here, visitors can visit the gift shop where all manner of alien apparel and souvenirs can be found and grab a cold drink to quench your desert thirst.

The highway continues westward through the Tikaboo Valley and over mountains for another 38 miles before coming to the tiny town of Rachel, Nevada. 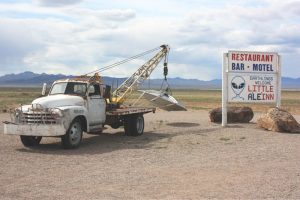 The youngest town in the state, it is considered the “UFO Capital of the World.” With only about 50 people living in the small town and only 100 people in the entire valley, Rachel does not even have a post office. However, there is a gas station/convenience store called the Alien Cowpoke and the Little A’Le’Inn that is the main attraction. Here can be found a bar/restaurant that serves up Alien Burgers and beers. It also has a gift shop with all manner of UFO-themed merchandise, a small motel, and a small RV Park. Outside, a tow truck rescuing a broken-down UFO, an alien mural, and a sign reading, “Earthlings Welcome,” make for great photo opportunities.

Here is one of the few places in the nation where visitors and residents hear sonic booms regularly. Rachel is the closest town to Area 51 and caters to tourists, geocachers, and UFO seekers year-round. 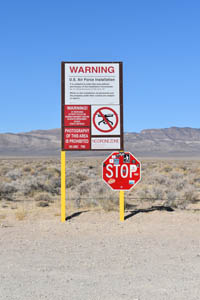 Warning! DO NOT enter Area 51 by Kathy Weiser-Alexander.

From here, many might be tempted to get a closer look at Area 51. But, the Nevada Test Site is NOT a tourist attraction! It is an active military base, patrolled and guarded by some of the world’s heaviest security. Intimidating trespassing signs are posted along the perimeter that stating that deadly force is authorized. The fenced-in site is monitored by sound, motion, and thermal alarms, many of which are disguised as Joshua trees. Armed guards take aggressive action against those who get too close to the Test Site, and anyone caught trespassing will be prosecuted, meaning possible jail time.

Leaving Rachel, the otherworldly highway continues northwest to enter Nye County before ending at US 6 at Warm Springs.

Despite tourism generated by people searching for alien life signs, only about 200 cars drive some portion of the Extraterrestrial Highway daily.

Interestingly, more UFO sightings were being reported at staggering rates in 2019. Some of these came from reputable members of the US Navy. In June 2019, Congress even looked into the navy pilot UFO sightings; however, nothing was confirmed.

“The forbidden aspect of Area 51 is what makes people want to know what’s there.” Peter Merlin, Aerospace historian and author, who has been researching Area 51 for more than 30 years

Area 51 is located in the southern portion of Nevada, 83 miles north-northwest of Las Vegas. 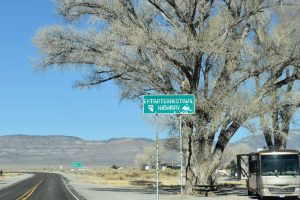