One of the best-known and revered prospectors of Death Valley, Frank “Shorty” Harris was born on July 21, 1857, in Rhode Island, but was orphaned when he was just seven years old. In the late 1870s, he rode the rails west to seek his fortune in mining. He spent a lot of time in several mining camps including Leadville, Colorado; Tombstone, Arizona, in the mines of Idaho before making his way to Death Valley. Standing just five feet, four inches tall, he soon took on the nickname of “Shorty,” and quickly earned a reputation that he could “smell gold.”  Known throughout the region for having found several good claims, he never worked or developed them. Instead, he spent a lot of time talking and drinking in saloons rather than doing the hard labor of mining. Known for his wild exaggerations and tall tales, most of his stories made him out to be a hero, but, in spite of this, he was well-liked.

In the summer of 1904, Harris partnered with a man named Ernest “Ed” Cross and on August 9th, they discovered the Bullfrog Mining District. According to the tale, as the two were preparing to head out for the day, Ed was cooking breakfast when one of Shorty’s mules took off. Chasing after the mule, he stubbed his toe on a rock and fell down. As he was getting up, he looked around before letting out a yell: “There it is, the strike of the century! Forget the breakfast Eddie, let’s get ta Goldfield and get this assayed!”  Incredibly, the ore samples came back to be worth $3,000 per ton and Shorty wasted no time going to the saloon to celebrate. While Shorty is on a binge for almost a week, Ed was working on lining up a sale for the mining rights. Unfortunately, Shorty would come out on the “short end” of this great find as while he was “celebrating,” he gambled away his share for $1,000 and a mule to a man named J.W. McGaliard. His partner  Cross, however, joined with McGaliard and formed the Original Bullfrog Mine. Later, Ed sold his share for $25,000 and he and his wife bought a big ranch in Escondido, California. 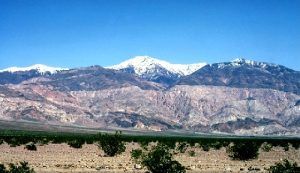 Shorty continued to search for the all elusive glittering gold and in the fall of 1904, he hustled another grubstake from Leonard McGarry, the Bullfrog postmaster. He and a man named George Pegot then headed for the Panamint Mountains in December.  There, they found free gold pockets on the north side of Hunter Mountain. Shorty rushed the sacks of gold to be assayed at Goldfield. Coming in at $250 a ton, the find began the rush of the Gold Belt Spring Mining District. However, Shorty drank through most of the rush, not profiting from his find.

The next year, he obtained another grubstake and partnered with Jean Pierre “Pete” Aguereberry, who had just been swindled out of Echo Canyon by Chet Leavitt. The pair soon headed to Ballarat, California, taking the trail across the valley floor and heading up Blackwater Canyon to Wildrose Spring. Along the way, Aguereberry spotted flecks of gold in a rock and they both soon staked out several claims, with Pete talking the north half, which he called Eureka and Shorty claiming the south half, calling it Providence. The town of Harrisburg is soon founded and Shorty’s two grubstakers hustled him off to San Francisco to find backers for the Cashier Gold Mining Company. This time, Shorty didn’t gamble away his interest and ended up with 50,000 shares of stock and $10,000 in cash.

Shorty continued to prospect for the rest of his life, though he never had a mine he could call his own. At the age of 78, having been ill for a time, he died in 1934 at his cabin at Big Pine, California.  Before he died he had requested to be buried at the “bottom of Death Valley,” beside an old friend named James Dayton. He requested that the following epitaph be placed on his headstone: Here lies Shorty Harris, a single blanket jackass prospector – 1856-1934 [sic]. [Note: the marker mistakenly placed his birth a year earlier as he was actually born in 1857] 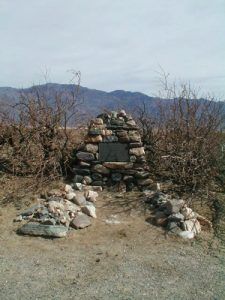 In 1930, Shorty told his story to the Magazine of the American Automobile Association of Southern California. Here is an excerpt from  Half a Century Chasing Rainbows by Frank “Shorty” Harris as told to Phillip Johnston.

The best strike I ever made was in 1904 when I discovered the Rhyolite and Bullfrog District. I went into Boundary Canyon with five burros and plenty of grub, figuring to look over the country northeast from there. When I stopped at Keane Wonder Mine, Ed Cross was there waiting for his partner, Frank Howard, to bring some supplies from the inside. For some reason, Howard had been delayed, and Cross was low on grub.

“Shorty,” he said, “I’m up against it, and the Lord knows when Howard will come back. How are the chances of going with you?”

“Sure, come right along,” I told him, “I’ve got enough to keep us eating for a couple of months.”

So we left the Keane Wonder went through Boundary Canyon and made camp at Buck Springs, five miles from a ranch on the Amargosa River where a squaw man by the name of Monte Beatty lived. The next morning while Ed was cooking, I went after the burros. They were feeding on the side of a mountain near our camp, about half a mile from the spring.

I carried my pick, as all prospectors do, even when they are looking for their jacks — man never knows just when he is going to locate pay-ore. When I reached the burros, they were right on the spot where the Bullfrog Mine was afterward located. Two hundred feet away was a ledge of rock with some copper stains on it. I walked over and broke off a piece with my pick — and gosh, I couldn’t believe my own eyes. The chunks of gold were so big that I could see them at arm’s length — regular jewelry stone! In fact, a lot of that ore was sent to jewelers in this country and England, and they set it in rings, it was that pretty! Right then, it seemed to me that the whole mountain was gold.

I let out a yell, and Ed knew something had happened; so he came running up as fast as he could. When he got close enough to hear, I yelled again: “Ed we’ve got the world by the tail, or else we’re coppered!”

We broke off several more pieces, and they were like the first — just lousy with gold. The rock was green, almost like turquoise, spotted with big chunks of yellow metal, and looked a lot like the back of a frog. This gave us an idea for naming our claim, so we called it the Bullfrog. The formation had a good dip, too. It looked like a real fissure vein; the kind that goes deep and has lots of real stuff in it. We hunted over the mountain for more outcroppings, but there were no other like that one the burros led me to. We had tumbled into the cream pitcher on the first one — so why waste time looking for skimmed milk?

That night we built a hot fire with greasewood, and melted the gold out of the specimens. We wanted to see how much was copper, and how much was the real stuff. And, when the pan got red hot, and the gold ran out and formed a button, we knew that our strike was a big one and that we were rich.

“How many claims do you figure on staking out?” Ed asked me.

Ed saw that that was a good argument, so he agreed with me.

After the monuments were placed, we got some more rich samples and went to the county seat to record our claim. Then we marched into Goldfield and went to an eating-house. Ed finished his meal before I did, and went out into the street where he met Bob Montgomery, a miner that both of us knew. Ed showed him a sample of our ore, and Bob couldn’t believe his eyes.

“Where did you get that?” he asked.

“Shorty and I found a ledge of it southwest of Bill Beatty’s ranch,” Ed told him.

Bob thought he was having some fun with him and said so.

“Oh, that’s just a piece of float that you picked up somewhere. It’s damn seldom ledges like that are found!”

Just then I came walking up, and Ed said, “Ask Shorty if I ain’t telling you the truth.”

“Bob,” I said, “that’s the biggest strike made since Goldfield was found. If you’ve got any sense at all, you’ll go down there as fast as you can, and get in on the ground floor!”

That seemed to be proof enough for him, and he went away in a hurry to get his outfit together — one horse and a cart to haul his tools and grub. He had an Indian with him by the name of Shoshone Johnny, who was a good prospector. Later on, it was this Indian who set the monuments on the claim that was to become the famous Montgomery-Shoshone Mine.