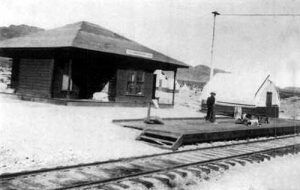 Amargosa – First called Johnnie Station, this was once an important stop on the Las Vegas & Tonopah Railroad, originally established as a  temporary site while tracks were being laid westward toward Rhyolite and Beatty. However, it became a permanent station when strikes were made at Johnnie. When a post office was opened in December, 1901, the name was changed to Amargosa, meaning “bitter water” in Spanish, because a recent well dug in the area had brought up nothing but brackish water. The post office was short lived however, and closed just a year later. Another opened three miles west of Rhyolite in 1904 which then serviced the Amargosa community. By then, the tiny settlement had begun to boast a few businesses, including a store, hotel, restaurant, and a blacksmith shop.

An important shipping point for Johnnie and other areas to the west, a daily stage was established from Amargosa to Johnnie. It also became a stopping point and freight stop for people and supplies heading to the new copper finds at Greenwater, California.  When the Tonopah & Tidewater Railroad was completed westward in 1907, Amargosa’s shipping activities declined as well as the town, leaving only the railroad agent and one merchant.

However, when the mines at Johnnie began to produced again, people soon came back. In 1914 it supported about 25 people, but three years later it was completely abandoned. The only remnant of Amargosa is the large concrete foundation of the old station and it is difficult to find. The old townsite is located about 16.5 miles east of Amargosa Valley on the north side of US 95.

Ashton- About 15 miles southwest of Beatty, Ashton was small water stop on the Tonopah & Tidewater Railroad. It never really developed and after the railroad pulled out it was abandoned. There are no remains today. 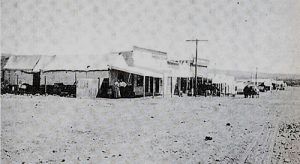 Beatty – Not a ghost town, but a vital part of Death Valley mining days, Beatty is a small community today with a population of about 1,100 people. It was established in 1905, when the Las Vegas and Tonopah Railroad planned to come through the area. The town was named for Montillus Murray “Old Man” Beatty, who settled on a ranch in the Oasis Valley in 1896 and became Beatty’s first postmaster. A townsite was soon laid out and Ernest Alexander “Bob” Montgomery, owner of the Montgomery-Shoshone Mine near Rhyolite, built one of its first major buildings — the Montgomery Hotel.

During Beatty’s first year, wagons pulled by teams of horses or mules hauled freight between the Bullfrog District, which included the boomtown camps of  Rhyolite, Bullfrog, Gold Center, Transvaal, and Springdale; to the nearest railroad, at that time in Las Vegas. By the middle of 1905, some 1,500 horses were being utilized. That same year, Beatty gained a newspaper called the Beatty Bullfrog Miner. The town became a major transportation hub when the railroad arrived in October, 1906. The following year, in April, the Bullfrog & Goldfield Railroad arrived and the Tonopah & Tidewater added a third railroad in October 1907.

Unfortunately, when the mining towns which Beatty supported declined after the Panic of 1907, Beatty did as well. The Beatty Bullfrog Miner went out of business in 1909. Residents then received their news from the nearby Rhyolite Herald, but, it too, went out of publication in 1912. 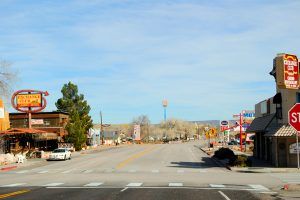 The Las Vegas and Tonopah Railroad ceased operations into Beatty in 1918. The Bullfrog & Goldfield Railroad followed suit a decade later in 1928. However, the town still sported the Tonopah and Tidewater and continued to act as a railhead for the area. It too, would pull out of the small town in 1940. However, that same decade, Nellis Air Force Base and other federal installations contributed to the town’s economy, as did tourism from Death Valley National Park, and the rise of Las Vegas as an entertainment center. However, by 1950, it was only called home to 485 people.

The Beatty area had no newspaper for decades until 1947, when the Beatty Bulletin, a supplement to the Goldfield News, began to be published. However, it would only last until 1956.

When a new mine opened west of Beatty in 1988, the population briefly surged from about 1,000 to nearly 2,000 by the end of 1990. However, like the mines before it, this one also closed in 1998 and the population feel to its former level. Today, the small town is home to the Beatty Museum and Historical Society and to businesses catering to tourist travel. 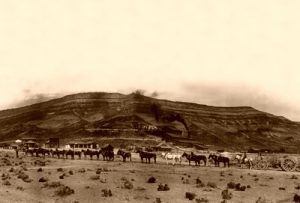 Bonnie Claire– Also known by several other names including Clare, Clair, Thorp’s Wells, Thorp, Montana Station, Summerville and Gold Mountain, mining began in the area in the 1880’s and a small stamp mill was built at a site then known as Thorp’s Wells. Serving several mines located near Gold Mountain some six miles to the northwest. It operated into the early 1900’s when the Bonnie Claire Bullfrog Mining Company purchased it. A small camp formed and a stage line from Bullfrog to Goldfield ran through the camp, which was then called Thorp. Another small camp called Summerville also developed about a mile northwest, but it was short lived. In 1904, the company built a larger mill called the Bonnie Claire, which treated ore from all over the district. A post office called Thorp was established in June, 1905.

The camp grew slowly until September, 1906 when the Bullfrog-Goldfield Railroad reached the settlement. The new station was called Montana Station, but, when a townsite was platted the following month, it was called Bonnie Claire. However, the post office wouldn’t be renamed from thorp to Bonnie Claire until 1909, due to issues with the government.

A number of properties began to produce on Gold Mountain and the Bonnie Claire Bullfrog Mining company built a 20-stamp mill at about which time the community peaked with a population of about 100 people. However, the Panic of 1907 scared investors, which caused a suspension in mining operations and dashed the dreams to town promoters. The town limped along with a few residents, but continued only because the railroad passed through the small community.