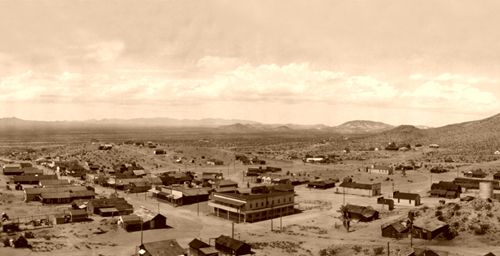 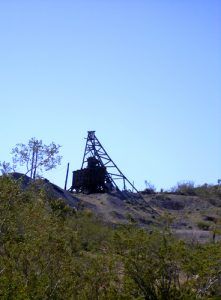 About an hour south of Las Vegas is the old mining camp and revived the town of Searchlight, Nevada. It all began when G.F. Colton discovered gold in 1897 and soon started the Duplex Mine. The following year, the Searchlight Mining District was founded, and a post office was established at the camp.

The origin of the town’s name has been speculated about for years, with some saying it came from a box of matches, while others claim it originated with the searchlights used to guide patrons into the brothels of the area. Nevada Senator Harry Ried, who is from Searchlight, has indicated the town’s name most likely came from Colton, who is reported to have said “it would take a searchlight to find gold ore there” right before he found gold.

As word spread, the camp and its surrounding area were flooded with miners. In 1900, the Quartette Mining Company was formed, which would become the mainstay of the mining district, producing almost half of the area’s total output. Two years later, the company built a 16-mile narrow-gauge railroad from the mines down the hill to its mill on the Colorado River. Boasting some 1,500 people in 1902, it was the largest town in the area with numerous claims and mines.

Continuing to grow, the community was called home to some 5,000 residents by its peak year of 1907. It had 44 working mines, a telephone exchange, and numerous businesses, including over a dozen saloons. However, that same year, mining began to suffer as the quality and quantity of gold ore declined, requiring additional capital to operate the mines.

On March 31, 1907, the 23 mile Barnwell and Searchlight Railroad connected the town with the Santa Fe line to Needles, California, and beyond. Though transportation problems for the ore had been solved, the mines were continuing to decline. By 1919, the train was running to Searchlight only two times per week, and when a flood washed out the tracks in September 1923, train service was never restored.

People began to leave the area in masses, and by 1927, there were only about 50 people left in the town. Mining revived for a short time when a new mill was built in 1934, but just a year later, it was closed due to a lack of ore. Total production throughout Searchlight’s heyday years was approximately $4.5 million in ore. Other resurgences in the 1930s and ’40s occurred during the construction of the nearby Hoover Dam.  The last gold mine of the 1900s closed in 1953. 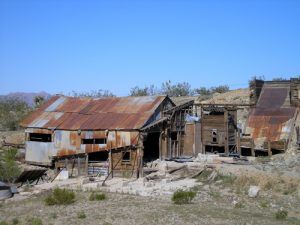 Over the decades, as recreational opportunities along the Colorado River began to be developed, Searchlight became a tourist and retirement community. Today, the small community, called the Gateway to Lake Mohave, sits just 14 miles up the hill from beautiful Cottonwood Cove, one of the best Large Mouth Bass fisheries in the American West. The Cottonwood Cove Resort and Marina are located inside Lake Mead National Recreation Area.

According to the 2010 census, this now unincorporated town supports just over 500 people. Though the small city is filled with fishermen, water enthusiasts, and nature lovers, it still provides a peek at its mining past in several old buildings, headframes, mining remnants, and at the Searchlight Historic Museum Historic Mining Park. The museum, open year-round, is located at 200 Michael Wendoll Way.

After the price of Gold spiked in 2011, interest returned to mining of the area with the company Nevada Milling and Mining leading the charge, using new technologies to leach tiny particles of gold from ore that would have been considered low grade in the early 1900s.  As of July 2014, the company was set to begin operations and plan to crush 200 tons of rock a day. 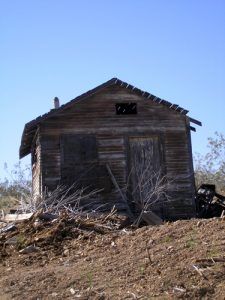 Searchlight is situated in the Colorado River Basin in Clark County, Nevada, at U.S. 95 and NV-164, midway between Las Vegas and Laughlin.