Articles from the Reno Evening Gazette, 1891

The City of the Dead

The Death Of Kit Carson, Jr.

A Victim Of Violence 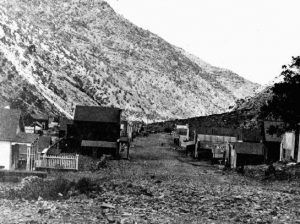 In the first settlement of Panamint, which is situated in Inyo County, California, on the western side of the summit overlooking Death Valley, its population contained some of the worst desperadoes on the coast, outside of the penitentiaries. There were many lawless scenes enacted, and several deaths by violence, which were dismissed from the mind as soon as the victims were buried. The burial plot was in a little gulch above the town, which was called Sour Dough Canyon, and when a man was laid to rest, the fact was referred to by the sports in flippant manner and the words, “Oh, he’s planted in Sour Dough.” In the early settlement, no wagons were used in the camp, because the canyons and hillsides were so steep that wheels were useless, and all transportation was done on the backs of mules and burros.

There was one exception, and that was a little wagon used by the butcher in moving meats from the slaughter house to the market. It was hauled by two sure-footed little brown mules. This outfit was pressed into service whenever needed for a hearse, and the little mules would lop their ears in solemn gravity as they plodded along with the silent mourners on their way up Sour Dough.

At the first Fourth of July celebration the same outfit was used for the Car of State, and the little mules held their ears high in patriotic defiance of the blare of a bass tuba and a drum that composed the band on the occasion. The canyon was narrow, and to turn the Car of State it had to be lifted up and carried around by the procession that followed on foot. The Car of State carried, beside the driver, the Goddess of Liberty and three children, which was all the little folks there were in camp, and as an illustration of the creative imagination of the editor of the Panamint News, his description of the car was: “The Car of State was gotten up by Grand Marshal Paris and Mr. Stebbins, and reflected much credit on these gentlemen for its gorgeous beauty. It was brought into the procession at an early hour, filled with young ladies and children of Panamint.” And, he added further, that he “was sorry he could not obtain for publication the names of all the children.” The celebration was strictly non-partisan, and it was probably as patriotic as any celebration that ever kept perfectly sober.

The day closed with a fine exhibition of fireworks under the management of Dave Nagle. Not long after this event, Senator Stewart and Trenor W. Park, the Vermont capitalist, visited the camp to inspect their mining properties, and on the morning of their departure, just as they were preparing to step into the stage, one of their employees named McKinney had a few words with a man named Jim Bruce, and in less time then it takes to tell it. They commenced firing, And emptied their revolvers into each other. The Senator and his companions took hasty refuge behind a stone wall, as they were “not in it.” Both combatants were carried off on stretchers. McKinney was mortally wounded and died in a short time. Bruce recovered with a crippled arm, had an examination before the Justice and was discharged. And, to illustrate the manner in which the press was muzzled, is here given the introductory sentence used by the Panamint News in giving the account of what it termed “An Unfortunate Affair.” It said: “We are pained to record that during a slight misunderstanding that occurred at the express office previous to the departure of the stage yesterday, one of our esteemed fellow citizens was compelled to resort to violent measures to protect his person. His opponent will be buried tomorrow in the little cemetery in Sour Dough.” 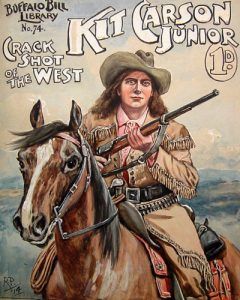 In the fall of 1870 news was received from Pioche announcing the death of Kit Carson, Jr., whose body was found weltering in his blood near a house on Lacour Street, that was then only sparsely built upon. A bullet wound showed the cause of death, and it was at first supposed to be a case of suicide, as he held his revolver grasped in his hand. But, an examination of it showed that all the chambers were loaded and none had been recently discharged. An inquest was held and a verdict rendered that death resulted from a pistol shot, fired by someone unknown to the jurors. It was looked upon as a cold-blooded murder, but, in those days people said nothing and were satisfied “to keep their eye on the gun,” for the “Peep ‘O Day Boys” were numerous, as was evidenced by the silent witnesses in the cemetery below the town.

People held theories as to the ones suspected of taking the life of Kit Carson, and there was one man living in Hamilton, 150 miles distant, who felt decidedly uncomfortable about it, for on the handle of the revolver held in Kit’s hand was engraved the name of the man in Hamilton. He was never called upon to explain, for he was a well known agent of the leading stage line, and was known to have been on duty in the Hamilton office at the time when the deed was committed.

Kit had pawned the revolver to him when going to Pioche only three months before, upon a promise to redeem it within thirty days, which he did, and had the revolver sent to him by express. During the time when it was in pawn, a friend of the agent, who had the run of the stage office, in an idle hour, without asking permission, had the name engraved on it, supposing the agent to be the owner. It could not be erased from the silver-plated handle, and was returned to Kit in that condition. Thus the agent’s name was connected with the murder and the temporary suspicion threw the scent off the trail of the real slayer and he escaped without ever being suspected, or if so, was at least never named.

Kit Carson Jr. was a nephew of Kit Carson, the famous scout, and like his uncle, was wedded to frontier life and the freedom that surrounded it. He was uncultivated, but generous to a fault; as true as steel and as courageous as he was stoical and indifferent to death. He scorned to skulk or take advantage of an unarmed foe, and the supposition was that his death was due to his open defiance of the lawless ruffians that then held sway in the camp. He was shot from behind, but in the throes of almost instant death, he drew the gun as he fell.