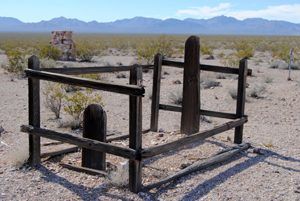 Mines of the Bullfrog District

People of the Bullfrog Mining District

Towns, Camps and Mines of the Bullfrog District

In 1900, Nevada was entering its third decade of depression. The incomparable Comstock Lode, which had stimulated the migration of 60,000 people into Nevada Territory, had financed a major portion of of the northern effort during the Civil War,  made Nevada into a state, and had spawned numerous smaller mining booms between 1805 and the 1870s, had died out by 1880. Since then, no new strikes of importance had been found, the population of the state had fallen to 40,000, and the economy was suffering the effects of twenty years of decline. Some cynics even suggested that Nevada should revert to territorial status. Such was the fate of a state whose entire economy was built around the boom and bust cycle of a mining frontier.

In 1900, however, the cycle was reversed. Silver was discovered at Tonopah that year, and massive high-grade gold deposits were located at Goldfield two years later. The great boom days returned to Nevada, and prospectors, spurred by dreams of untold riches, once again blanketed the mountains and deserts. No more discoveries were made which rivaled the riches of Tonopah and Goldfield, but numerous smaller camps were established which bloomed briefly on the desert, dreaming of becoming another Virginia City. Rhyolite, the metropolis of the Bullfrog District, was one of these camps.

Gold was first discovered in the Bullfrog District on August 4, 1904. The initial finds were high-grade surface ore assayed at $700 per ton — just the kind of stuff to start a boom. Shorty Harris, one of the discoverers, later described the reaction of Goldfield when he and his partner, Ed Cross, brought in their samples:

“I’ve seen many gold rushes in my time that were hummers, but nothing like that stampede. Men were leaving town in a steady stream with buckboards, buggies, wagons and burros. It looked like the whole population of Goldfield was trying to move at once. Timekeepers and clerks, waiters and cooks — they all got the fever and milled around wild-eyed, trying to find a way to the new strike.

A lot of fellows loaded their stuff on two-wheeled carts — grub, tools and cooking utensils, and away they went across the desert, two or three pulling the cart and everything in it rattling. Men even hiked the seventy-five miles pushing wheelbarrows.

When Ed and I got back to our claim a week later, more than a thousand men were camped around it, and more were coming every day. A few had tents, but most of them were in open camps.

That was the start of Bullfrog and from then things moved so fast that it made us old timers dizzy.” 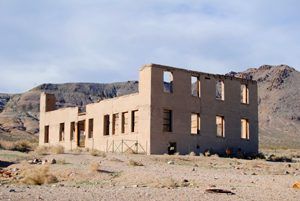 All that’s left of the Rhyolite school. February, 2015, Kathy Weiser-Alexander. Click for prints, downloads and products.

Although Shorty Harris was guilty of much romanticizing in his later interviews, events did indeed move fast. Towns sprang up overnight in competing locations. Amargosa (later called Original) was laid out on September 30, 1904 and had sold 35 lots within three weeks. Beatty, to the southeast, was located on October 20th, and the towns of Bullfrog, and Rhyolite were started by competing townsite companies in November — all within a few miles of each other.

Amargosa (Original) reported 1,000 lots sold before the town was two months old, some for as high as $200 each, and by November, the town boasted three stores, four saloons, two feed lots, restaurants, boarding houses, lodging houses, a post office and 35-40 other tent buildings. Prices, of course, were in proportion to the boom atmosphere and the costs of freighting 70 miles from Goldfield. Lumber for building was scarce and sold for $100 per 1,000 board feet, while hay for prospectors’ burros and teamsters’ mules went for $100 a ton.

The boom continued through the spring of 1905. Thirty teams a day left Goldfield for the Bullfrog District in January, and one traveler counted 52 outfits arriving in the district during one day in March. Confusion reigned supreme, especially for prospectors who left town for a few days in March, to find upon their return that the entire town of Amargosa (Original) had picked up and moved a few miles south to the town of Bullfrog. Mining claims changed hands furiously, for ground near a publicized claim was worth $500 to $2,000, even if a pick had yet to strike the earth. By May, Rhyolite counted twenty saloons, a sure sign of wealth.

By late spring, the dust had settled a little, at least to the point where one could leave home overnight and expect the town to be in the same location when returning. Rhyolite and Bullfrog, located only ¾ of a mile apart, had become established as the leading towns of the district, with Beatty, four miles to the east, running a poor third, and Gold Center barely surviving.

Four daily stages connected the district with the outside world, post offices were running at Beatty, Bullfrog and Rhyolite, lots in Rhyolite which sold for $100 in February were selling for $4,400, and wheel and faro games were going 24 hours a day. “It reminds one of the old times,” remarked one prospector. In addition, Rhyolite, Bullfrog and Beatty each had a bank, and each had a weekly newspaper. The Bullfrog Miner printed its first issue on March 31st, the Beatty Bullfrog Miner on April 8th, and the Rhyolite Herald on May 5th.

The boom kept pace through June. By that time, some 3,000 people were estimated to be in the district, the telephone line was completed to Bullfrog and Rhyolite, and a telegraph office had opened. Over 300 messages were sent over the wires on the first day of operation, mostly to Goldfield brokers and stock dealers. By August, 1905, both Bullfrog and Rhyolite had their own piped-in water systems, Rhyolite had yet another bank, and the two towns had a population of 2,500, with another 700 at Beatty and 40 in the tent city of Gold Center. The Rhyolite Herald listed 85 incorporated companies working in the district. 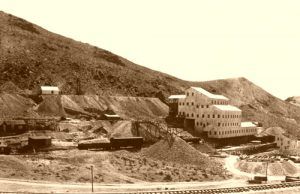 The Montgomery Shoshone Mine & Mill complex near Rhyolite, Nevada, California Panorama Co., 1907. Montgomery Mountain is in the background and a spur line of the Las Vegas & Tonopah Railroad in the foreground.

The pandemonium subsided somewhat in 1906, as the rush phase of the boom slowly turned into the more controlled phase of development. By that time, 165 mining companies were reported working in the district, and all had hopes of developing another mother lode with just a few more feet of digging. Rhyolite gradually won the battle with Bullfrog and by spring had emerged as the metropolis of the southern desert, when Bullfrog’s store, saloons and newspaper moved up the hill to Rhyolite. Soon, three railroads announced plans to construct lines into the district.

Then, the first hint of disaster struck, with the earthquake and fire of San Francisco, California. Feverish developments slowed momentarily, as miners, owners, and promoters waited to see what effect the destruction of the west coast’s financial center would have upon their fortunes.

The boom spirit was still too prevalent, however, for the effect to be prolonged, and with the promise of financial aid from mining promoter Charles Schwab, the bustle returned. By the end of 1906, Rhyolite seemed assured of its self-proclaimed title of Queen of the Desert when the Las Vegas & Tonopah Railroad completed its tracks into town. With the advent of cheaper rail freightage rates, the camp was certain to add to its monthly payroll of $100,000, and to continue its development.