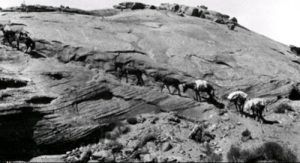 Las Vegas, Nevada was given its name by Spanish traders in the Antonio Armijo party in 1829. On route to Los Angeles, California along the Spanish Trail from Texas, the 60-man group veered from the normal route, camping about 100 miles northeast of present-day Las Vegas. At the time, the Spaniards referred to the route as “jornada de muerte” or journey of death until a young scout named Rafael Rivera discovered the valley with its abundant wild grasses and plentiful water supply. In some low areas of the Las Vegas Valley contained artesian springs that created extensive green areas in contrast to the surrounding desert, hence the name “Las Vegas”, Spanish for “The Meadows”. 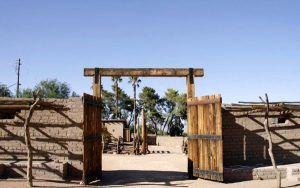 It was not until famed explorer Captain John Fremont traveled into the Las Vegas Valley in 1844, that anyone other than Spanish explorers, missionaries, and the Native Americans knew of the valley. In 1855, Brigham Young assigned 30 Mormon missionaries to the area to convert the Paiute Indian population. They soon built a fort that constituted the first non-Indian settlement in the region. The Paiute rejected their teachings, occasionally raiding the fort until it was abandoned in 1857. Several years later, in 1864, the U.S. Army built Fort Baker there.

In 1885, the State Land Act offered land at $1.25 per acre and farming became the primary industry for the next 20 years, using the local springs to irrigate their crops. Further growth occurred when precious metals were discovered in the area, starting the mining industry in the late 19th century.

At the turn of the century, the springs were piped into the town providing a reliable source of fresh water. The valley soon became a resting stop, first for wagon trains and later for railroads. The railroad was completed in January 1905, connecting Las Vegas to Los Angeles and Salt Lake City. The railroad would become the principal industry in Las Vegas for the next 25 years.

The railroad yards were located along what was then dusty Fremont Street. Today, Jackie Gaughan’s Plaza Hotel, located at Main and Fremont streets in Downtown Las Vegas, stands on the site of the original Union Pacific Railroad depot. Freight and passenger trains still use the depot site at the hotel as a terminal — the only railroad station in the world located inside a hotel-casino. 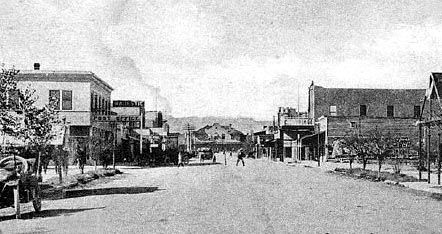 Las Vegas was officially founded on May 15, 1905, when 100 acres, in what would later become downtown, were auctioned off to ready buyers. In the beginning, Las Vegas was a part of Lincoln County until 1909 when it became the county seat of the newly established Clark County.

Nevada was the last western state to outlaw gambling in the first decade of the 20th Century on October 1, 1910. In the beginning, the law was so strict that it even forbade the western custom of flipping a coin for the price of a drink. Legal or not, area residents wasted no time in setting up underground games. Las Vegas became an incorporated city in 1911.

With a population of a little more than 5,000, Las Vegas legalized gambling again on March 19, 1931, a decision that would forever change the face of Nevada and the city of Las Vegas. One month later, the city issued six gambling licenses. 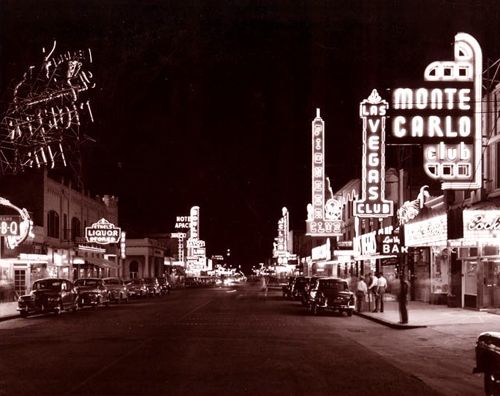 In the same year, the construction of Hoover Dam brought an influx of construction workers which started a population boom and gave the Valley’s economy, which was in the grips of the Great Depression, a needed boost.

By 1940 Las Vegas’ population had grown to almost 8,500 and at the end of World War II, the defense industry came to the valley. The isolated location, along with plentiful water and inexpensive energy, made Las Vegas an ideal site for military and defense-related businesses. The site for Nellis Air Force Base was located in the northeast, and the Basic Management Complex, providers of raw materials, was located in the southeastern suburb of Henderson. These industries continue to employ a significant number of valley residents.

Las Vegas started its rise to world fame in 1941 when hotelman Tommy Hull built the El Rancho Vegas Hotel-Casino across from the current Sahara Hotel on what would become known as the Las Vegas Strip. Hull also began the “entertainment” type of casino that would develop Las Vegas’ reputation as a desert playland, when he booked singers, comedians, strippers, and dancers to entertain the hotel guests in the resort’s small, intimate showroom. 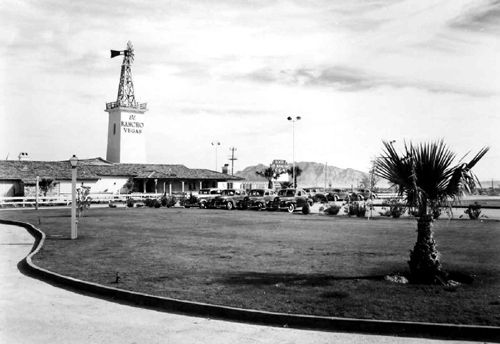 Before long, other developers began building lavishly decorated resort hotels and incorporating gambling casinos. Some of the earliest hotels were the Last Frontier, the Thunderbird and Club Bingo, copying the successful star entertainment format for a number of years.

Several such early enterprises are widely reputed to have been backed by money from crime syndicates based in the eastern United States. Gangsters Benjamin “Bugsy” Siegel and Meyer Lansky are widely credited as the organizers and prime movers behind the early development of Las Vegas. Tourism and entertainment took over as the largest employer in the valley.

By far the most celebrated of the early resorts was the Flamingo Hotel, built by mobster “Bugsy” Siegel, which opened on New Year’s Eve in 1946.  Modeled after resort hotels in Miami, the Flamingo stood out among the western ranch-style theme casinos and hotels.  Siegel called it a “carpet joint.”  Just six months after its opening, Siegel was murdered by an unknown gunman in his girlfriend’s home in Beverly Hills, California. 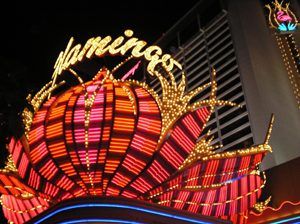 Today, the Flamingo Hotel is the only survivor of the 1940s era, as other resorts have long lost their identities through absorption by new owners, demolition, extensive renovations, and name changes.  Though the Flamingo retains its original name after all these years, it has been entirely renovated in order to compete with the newer modern hotels on the Las Vegas Strip.

Resort building continued to accelerate in Las Vegas in the 1950s. The Desert Inn was opened in 1950, followed by the Sahara Hotel, atop the site of the old Club Bingo, in 1952.  In the same year, the Sands Hotel opened. In 1955, the Riviera Hotel became the first high-rise hotel on the Strip.

Other resorts that opened during the building boom begun in the 1950s included the Royal Nevada, Dunes, Hacienda, Tropicana, and Stardust hotels on the Strip and the downtown Fremont Hotel-Casino. The Dunes was the first casino to showcase topless showgirls on the Las Vegas Strip in 1957.

During the 50s and 60s, casino lounges provided continuous entertainment from dusk to dawn spawning names such as Don Rickles, Buddy Hackett, Shecky Greene, Alan King, Louis Prima, and Keely Smith, the Mary Kaye Trio and many others.

By 1960, Las Vegas encompassed 25 square miles and had a population of almost 65,000.  During the 1960s, large corporations began to build or buy casino and hotel properties to increase their profitability and began to make the transition into the legitimate business world.

In 1976, when casino-style gaming was legalized in Atlantic City, New Jersey, Las Vegas lost its exclusive claim to legalized gambling.  Before long, hotel-casinos began the race to become full-blown destination resorts for travelers, vacationers, gamblers, conventioneers and all members of the family.

When The Mirage opened in 1989, featuring a white tiger habitat, a waterfall, and man-made volcano, belching fire and water, it started a movement of people and construction away from downtown Las Vegas to the Las Vegas Strip. This resulted in a drop in tourism that the downtown area is still trying to recover from. 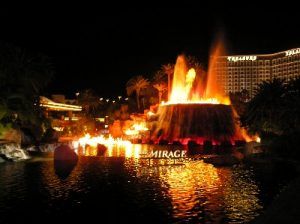 The Mirage was one of the first of many “Disney Land”  type hotels, photo by Amy Stark

In 1993, Mirage owner Steve Wynn opened Treasure Island adjacent to the Mirage, featuring Buccaneer Bay where a full-scale pirate ship and British frigate engage in a battle of cannon fire.  More and more “Disneyland” type resorts sprouted up, including the Excalibur, the Luxor, and New York-New York.

With the Strip expansion in the 1990s, downtown Las Vegas began to suffer. The Fremont Street Experience was built in an effort to draw tourists downtown. While greatly slowing the decline, it did not stop the decline in tourism and revenue.

A concerted effort has been made by city fathers to diversify the Las Vegas economy from tourism by attracting light manufacturing, banking, and other commercial interests. The lack of any state, individual or corporate income tax and very simple incorporation requirements have fostered the success of this effort.

Las Vegas is sometimes called Sin City due to the popularity of legalized gambling, availability of alcoholic beverages at any time of the day and night, various forms and degrees of adult entertainment, and legalized prostitution in nearby counties (Nevada law prohibits prostitution in counties which have large populations). The nickname favored by local government and promoters of tourism is “The Entertainment Capital of the World”. The city’s glamorous image has made it a popular setting for films and television programs. 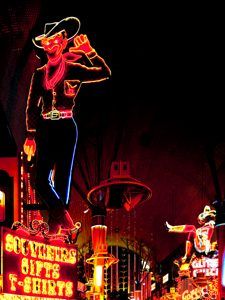 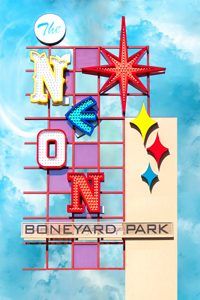 Bugsy Siegel and the Rebirth of Las Vegasl