Located along the border of California and Nevada, Lake Tahoe has a rich and diverse cultural heritage spanning thousands of years. The Lake Tahoe Basin was formed by vertical motion faulting creating the Carson Range on the east and the Sierra Nevada Mountains on the west some 2-3 million years ago. Snow, rain, and streams filled the southern and lowest part of the basin, forming the ancestral Lake Tahoe. Modern Lake Tahoe was shaped and landscaped by the scouring glaciers during the Ice Age a million or more years ago. 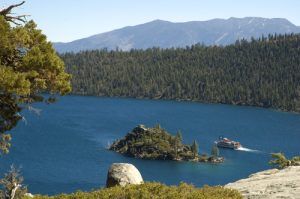 Much remains to be learned about the first peoples who utilized the Lake Tahoe Basin as many as 8,000 to 10,000 years ago. However, in later years, the archaeological record becomes clearer. At the time of first European contact, the Washoe Tribe and their ancestors had been calling the resource-rich Lake Tahoe and approximately 10,000 square miles of surrounding land their home for at least 2,000 years. Washoe existence at the lake centered around fishing camps and milling sites located in lush meadows within view of the lake and along permanent streams.

Linguists think the Washoe origins are earlier than any other Sierran or Great Basin Indian cultures. The Washoe language is unique and unrelated to those spoken by any neighboring tribes. Washoe tradition indicates their homeland has always included Lake Tahoe, without reference to migrations from other worlds, as is common in other cultures. The Washoe were first to name Lake Tahoe simply “the Lake.” Da ow ga, the Washoe word for “lake” is thought to be the source for “Tahoe.”

Scores of prehistoric and ethnographic Washoe sites have been identified around the shores of the lake as well as in higher-elevation use areas. Today, there some 1500 enrolled members of the Washoe Tribe of Nevada and California who live on “Colonies,” tribal lands scattered in the Reno, Carson Valley, and Gardnerville areas of Nevada and in Woodfords, California. An active tribal government continues to lobby for a land base in the Lake Tahoe basin and works with federal and state agencies and private land owners to protect locations important to Washoe Heritage.

There are several sites in the Lake Tahoe vicinity where visitors can learn more about the Washoe tribe. 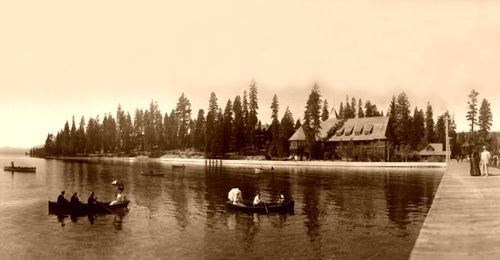 In 1844, pioneers began to settle throughout Tahoe Basin and establish claims on the land. In 1849, during the California Gold Rush, more settlers came along, opened roadhouses, and staked out ranches and farms. The first major disruption to the Washoe way of life at the lake came when a large silver lode was discovered in Virginia City, Nevada in 1859. Before long, the Lake Tahoe Basin rapidly became the victim of resource extraction on a massive scale. The forests of the entire basin were virtually clear-cut between the years of 1860 and 1890 to fuel mining operations, shore up the mine tunnels, and build the rapidly growing Virginia City. Once the land had been stripped of its natural forestation, entrepreneurs snapped up the land cheaply and began building hotels and mansions for the wealthy.

In the early 1900s, serious attempts were made to have Lake Tahoe declared a National Park. These efforts failed, due to the fact that the area had been ravaged and lacked the “untouched” qualities necessary for National Park status.

With the coming of the automobile and improved roadways, Tahoe lost its exclusivity with the influx of the general population. After World War II campgrounds and inexpensive hotels sprouted up and were very popular during the post-war growth period.

About one-third of the Tahoe Basin is in Nevada and two-thirds is in California. Most of the terrain is mountainous, limiting development mainly to relatively flat-lying areas along tributary streams. Major recreational activities within the basin include casino gaming in Nevada, alpine and cross-country skiing, golfing, water sports, hiking, fishing, camping, and bicycling.

Lake Tahoe is the second deepest lake in the United States and the tenth deepest in the world, with a maximum depth measured at 1,645 feet. 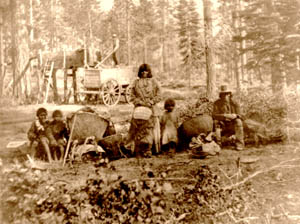 © Compiled and edited by Kathy Weiser/Legends of America, updated October 2020.