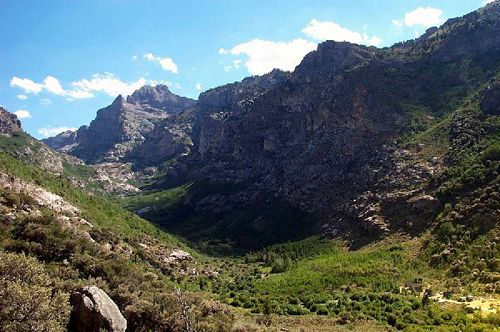 In 1846, the infamous Donner Party crossed the Ruby Mountains via Overland Pass. Another much smaller party, led by Armbruster Pike, was following the Donner’s, but they were several weeks behind. The same blizzard which stranded the Donner Party in the Sierra’s likewise hit the Pike party, who had missed the Overland pass cutoff and were now in the vicinity of Mooney Basin.

According to a document written about the history of White Pine County, the same tragedy befell the Pike party. Once all food supplies disappeared, and their livestock was eaten, they started munching on each other. Whether Armbruster Pike was murdered, and his legs were cooked up, or he lost both of his legs due to frostbite is unknown. What is known is that ever since that horrible winter, the ghost of Armbruster Pike has been seen off and on over the years. A ghost that is always described as being hunchbacked with long scraggly white hair and beard and no legs. 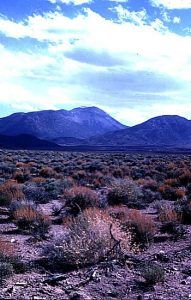 Mining activities have been going on in the Bald Mountain region since the late 1800s. The remains of two ghost towns are in these mountains. One old settlement called “Joy” lies within the upper reaches of Water Canyon, and another — Bald City, is in upper Mahoney Canyon. There are tales of miners just disappearing and never be found again. One of a miner whose body was found, but his head was missing. It was later found some distance away.

In 1957 a local rancher was herding cattle and lost some calves in Mooney Basin. While rounding them up near where the Horseshoe pit is now, he saw a figure hunched over in the bushes. When the cowboy went over to look, he came upon a hunchbacked man with long stringy white hair and beard. The man had blood all over him and appeared to be eating a dead calf. As well, the man had no legs.

During the 1980s, modern mining activities began at Bald Mountain and Alligator Ridge. The mechanics who worked on ‘B’ shift (graveyard) at the shop at Alligator Ridge witnessed many unexplained events. Haul trucks and dozers in the shop would mysterious startup all by themselves. Others have seen a lone figure at night, seemingly walking across Long Valley just east of the Alligator Ridge. In 1989, while hauling ore from the Top pit to the Alligator Ridge facilities, a contractor was killed when his truck went out of control and rolled. This incident occurred on the ‘S’ curve near the Horseshoe pit in Mooney Basin. Was the driver swerving to miss something or someone?

In the late 1990s, the Horseshoe pit was developed and mined out. During the archeological survey of the area, a gravesite and human skeleton was discovered. Local Native Americans argued that this was an ancient burial site and that the remains should be turned over to them. The County sheriff’s office investigated the matter and determined that the bones were not that old and most likely were from the 1950s or ’60s. 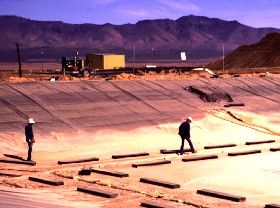 During the development phase of the Horseshoe pit, many strange incidents occurred. An exploration drill rig suddenly shut down, and all power went out. When the driller went for help and returned with another miner, the drill rig was ok and started right up. A dozer operator had the same thing happen to his equipment. No one was able to explain the cause of either incident.

During a blizzardy winter night, a lubeman was driving back from Mooney Basin, and as he approached the ‘S’ curve, he almost ran over a man in the road. When the lubeman reached the shop, he asked if anyone had seen someone walking around in the pit. No one had, and they asked why. The lubeman told them about the guy he had nearly run over on the haul road. He had stopped his truck and gotten out to ask the guy on the road if he needed a ride. The guy in the road then took off into the blizzard and the sagebrush. When the lubeman was asked to describe the man in the road, he said he had a long white beard and white hair and was hunched over. And further, “It was blizzarding so bad though that I couldn’t see his legs, just from the waist up.” The miners in the shop responded, “You just saw the ghost of Armbruster Pike.”  The lubeman was new on the mine site and had never heard of the stories about Pike. Not only did he swear to what he had seen, the lubeman saw Pike several more times after that, in the same area near Horseshoe.

Of course, any ghost story can always use some help. One quiet night, in the Horseshoe area, a couple of miners left the ‘new guy’ all alone on the drill rig. Now they had all been recently talking about Armbruster Pike, so even the ‘new guy’ was aware. When the two came back unnoticed, one of them put on a bright raincoat, just on his upper torso. He ran through the bushes, just within the edges of the light from the drill rig. To this day, the “new guy” swears he saw the ghost of Armbruster Pike trying to get him!

Another miner was camping in the area one January. He was by himself except for his two dogs. There were only about six inches of fresh snow on the ground. Late into the night, the dogs started growling, and the hair on their backs stood up. They took off into the darkness and came back 20 minutes later. The rest of the night, both dogs would sniff and growl occasionally and never completely settled down. The next morning, the miner followed the dogs’ tracks to see what they had been barking at and chasing. After following the tracks around a completed circle through the trees and back to the camp, no tracks were found – no deer, no mountain lion, no nothing -.just the dog’s tracks.

Does the ghost of Armbruster Pike really exist? Therein lies the mystery.

(This is a compilation of stories and tales that were gathered from the men and women working at Bald Mountain Mine, Nevada. The names have been omitted to protect the innocent. No animals were harmed in the writing of this story. If you know of or have heard of any incidents involving Armbruster Pike, please let me know so that they can be added to this historical document. Thanks to everyone who has helped, Brian.Iverson@Newmont.com