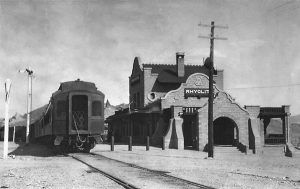 The Las Vegas & Tonopah Railroad was built in 1906 & 1907, from Las Vegas to Tonopah, and had stops in Beatty, Bullfrog, Rhyolite, and Goldfield. The LV & T ran for 14 years, until October 31, 1918, when the Nevada Department of Highways purchased the railroad right-of-way for Highway 95.

The early twentieth-century mining booms at Tonopah, Goldfield, and Rhyolite not only produced major economic and social changes in the life of southern and central Nevada but also brought about a major restructuring of Nevada’s transportation system. As the new camps boomed and prospered, they soon outgrew the capacities of mule teams and freighters to meet their demands, and for the first time, railroads were enticed into this region of Nevada. The lure of rich profits from the new camps was the catalyst which brought about the creation of new rail lines, but it was the happy geographic chance that the new camps were situated in a rough north-south line which made a new railroad link through Nevada possible.

Such a railroad would cost a great deal of money, though, and the traffic volumes in the early 1900’s simply did not warrant the construction of a single line. As a result, the north-south line was connected little by little by a group of independent railroads, built from one camp to another. By the time the Bullfrog boom was well underway, this process had already begun.

The Tonopah Railroad Company completed its line from the north into Tonopah in July 1904, which connected that camp with the Southern Pacific Railroad, via the Nevada & California Railway and the Virginia & Truckee Railroad. Within another year, as Tonopah and Goldfield were proven to be solid producers, and Rhyolite appeared to be following their examples, various plans were laid to continue the south-bound connections. The Tonopah Railroad became the Tonopah & Goldfield Railroad in late 1905, and shortly thereafter began construction of a line from Tonopah south to Goldfield.

With the completion of a railroad to Tonopah, which is about halfway between Carson City and Las Vegas, the northern half of the connection was completed. In the meantime, several plans for the southern half were beginning to take shape, at least on paper. “Borax” Smith had long contemplated a railroad which would connect his various borax mines in southern Nevada and southeastern California with the outside world, for the days of the famous twenty-mule team borax wagons had long since become economically infeasible. When Senator William Clark completed his San Pedro, Los Angeles & Salt Lake Railroad in January 1905, Smith decided to connect his mines with that railroad at Las Vegas. Verbal agreements between Clark and Smith were reached, and Smith soon announced the formation of the Tonopah & Tidewater Railroad.

Clark, however, was also looking at the new gold camps to the north of his railroad, and slowly came to the realization that he wanted to build his own line into the interior. The agreements with Smith were thus broken and Clark announced the formation of a rival company, the Las Vegas & Tonopah Railroad. As the names implied, both these southern roads envisioned extending their lines not only to the Bullfrog District but beyond to Goldfield and Tonopah, thus tapping the potential of all three mining camps.

Clark was the first to set to do business. His engineers conducted a preliminary survey from Las Vegas to Tonopah in early 1905 and completed it late in February. The proposed line would run north towards the Bullfrog District but would bypass the district itself by running through Beatty instead of Rhyolite. The route via Beatty would be comparatively flat and smooth and would avoid extensive construction costs which would have been necessary to climb the mountains into Rhyolite. After several months of negotiations with Borax Smith, who was forced to shift his operations from Las Vegas on the San Pedro, Los Angeles and Salt Lake line to Ludlow, California, where he would connect with the Santa Fe Railroad, construction on both roads began in the fall of 1905.

At about the same time, a third railroad entered the picture when John Brock, of the Tonopah & Goldfield Railroad, also spotted the potential of the Bullfrog District and announced the formation of another railroad company. This one would be a nominal extension of the Tonopah & Goldfield Railroad and would extend those lines south from Goldfield into the Bullfrog District. It soon became obvious to all parties involved, the first railroad to complete its line would have the greatest chance of success, and a race ensued. 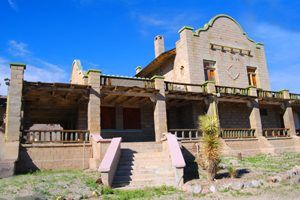 In January 1906, the first rails were laid on the Las Vegas & Tonopah, north of Las Vegas, and a month later the road had been completed for twenty-four miles. Although Rhyolite was ecstatic at the prospect of being connected to three railroads, the town’s leaders also realized that the prestige and prosperity of the town would be threatened if rail connections were made at Beatty four miles to the east, rather than at the metropolis itself. Rhyolite did not want to be on a branch line of any railroad and began to take steps. After several discussions between the town and the company, an agreement was reached. The Las Vegas & Tonopah agreed to extend its line through Rhyolite, rather than bypassing the city, and the town in turn guaranteed to secure property rights and right of ways through the town. Although this change in plans meant heavy additional construction costs–the Las Vegas & Tonopah estimated that it would cost as much to build a sixteen-mile “high line” through Rhyolite and back out of the Bullfrog Hills to the north as it would to build the entire 115 miles from Las Vegas to Beatty — the town convinced the railroad that the extra expense would pay off. If the railroad ran directly through Rhyolite and the Bullfrog Hills, numerous mines would be able to ship directly on the railroad, rather than having to pay freight expenses to have their ores hauled across the hills to Beatty. Since this meant that more mines would be able to ship their ore, and that more low-grade or could be profitably shipped, the increase in freight profits for the railroad would offset the additional construction costs. Besides that, passenger traffic would be dominated by the railroad which connected directly to Rhyolite, for who wanted to go to Beatty anyway? Despite the fact that the steep grade from Beatty to Rhyolite would mean that the railroad would be forced to stop each train at Beatty and hook on additional engines to negotiate the pass, the railroad was convinced.

The Rhyolite Board of Trade put the matter to a vote of the citizens, who approved the plan. The town announced that it would provide all necessary right of ways and property rights for the railroad if it, in turn, guaranteed that the route through Rhyolite would be a through route, and not just a branch line. The Las Vegas & Tonopah concurred, and plans were formalized. Doubling the pleasure of Bullfroggers, the Bullfrog-Goldfield Railroad, which had recently incorporated to build south from Goldfield, also announced that its terminus would be in Rhyolite. This road, however, would avoid the hilly route between Beatty and Rhyolite, and would instead build to Beatty, then swing to the south around the hills and hook back to the north, entering Rhyolite from the south.

Construction on the Las Vegas & Tonopah proceeded apace through the early part of 1906. By March, fifty-three miles of track had been laid, and graders were working eighty-four miles north of Las Vegas. To the southeast, “Borax” Smith’s Tonopah and Tidewater railroad was inching out of Ludlow, but it appeared that the Las Vegas and Tonopah would win the race to the Bullfrog District. By the middle of June, it had finished its grade all the way into Beatty, although the rails were still twenty-nine miles short of that town. The Tonopah and Tidewater had extended its rails 75 miles out from Ludlow, California but the heat of the summer put a halt to its construction work. In the meantime, the Bullfrog-Goldfield had finally started work on its line on May 8th, but initial progress had been slow.

The Las Vegas & Tonopah surveyed and laid out its rail yards at Gold Center, where the trains would be made up, and where northbound trains would pick up extra engines for the climb from Beatty to Rhyolite. Its future grade was surveyed through Rhyolite out to the west around the Bullfrog Hills, then back up to the north towards Mud Summit. This sixteen-mile stretch called the “high line,” would constitute the most difficult part of the construction of the entire line between Las Vegas and Goldfield, for after cresting the ridge at Mud Summit, the rest of the sixty-some miles was relatively flat and smooth. The surveying of this line laid to rest recurring rumors that the Las Vegas & Tonopah would stop at Rhyolite and let the Bullfrog-Goldfield handle north-bound traffic.