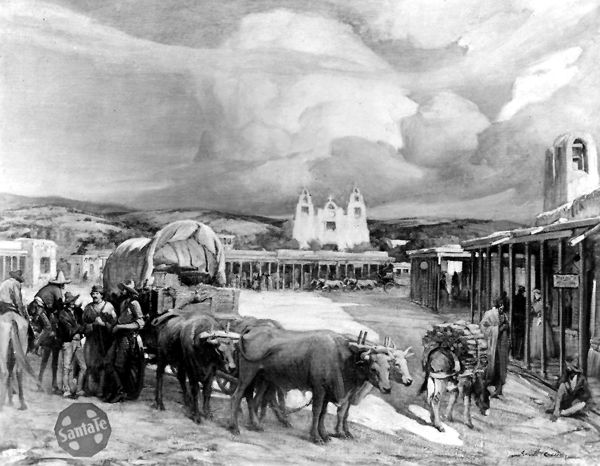 The story of the Santa Fe Trail now passing into oblivion once was on the tongue of every man. This old highroad, in its heyday, presented the most romantic and appealing features of the earlier frontier life. The Santa Fe Trail was the great path of commerce between our frontier and the Spanish towns trading through Santa Fe. This commerce began in 1822 when about three score men shipped certain goods across the lower Plains by pack animals. By 1826 it was employing a hundred men and was using wagons and mules. In 1830, when oxen first were used on the trail, the trade amounted to $120,000 annually; and by 1843, when the Spanish ports were closed, it had reached the value of $450,000, involving the use of 230 wagons and 350 men.

It was this great wagon trail which first brought us into touch with the Spanish civilization of the Southwest. Its commercial totals do not bulk large today, but the old trail itself was a thing titanic in its historic value.

This was the day not of water but of land transport; yet the wheeled vehicles which passed out into the West as common carriers of civilization clung to the river valleys — natural highways and natural resting places of homebuilding man. This has been the story of the advance of civilization from the first movements of the world’s peoples. The valleys are the cleats of civilization’s golden sluices. 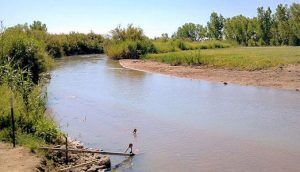 There, lay the great valley of the Arkansas River, offering food and water, an easy grade and a direct course reaching out into the West, even to the edge of the lands of Spain; and here stood wheeled vehicles able to traverse it and to carry dry goods and hardware, and especially domestic cotton fabrics, which formed the great staple of a “Santa Fe assortment.” The people of the Middle West were now, in short, able to feed and clothe themselves and to offer a little of their surplus merchandise to someone else in sale. They had begun to export! Out yonder, in a strange and unknown land, lay one of the original markets of America! 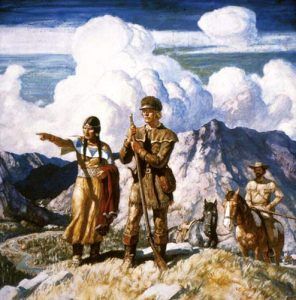 On the heels of Lewis and Clark, who had just explored the Missouri River route to the Northwest, Captain Zebulon Pike of the Army, long before the first wheeled traffic started West, had employed this valley of the Arkansas River in his search for the southwestern delimitations of the United States. Pike thought he had found the head of the Red River when, after a toilsome and dangerous march, he reached the headwaters of the Rio Grande. But, it was not our river. It belonged to Spain, as he learned to his sorrow, when he marched all the way to Chihuahua in old Mexico and lay there during certain weary months.

It was Pike’s story of the far Southwest that first started the idea of the commerce of the Santa Fe Trail. In that day geography was a human thing, a thing of vital importance to all men. Men did not read the stock markets; they read stories of adventure, tales of men returned from lands out yonder in the West.

Heretofore, the swarthy Mexicans, folk of the dry plains and hills around the head of the Rio Grande and the Red Rivers, had carried their cotton goods and many other small and needful things all the way from Vera Cruz on the seacoast, over trails that were long, tedious, uncertain, and expensive. A far shorter and more natural trade route went West along the Arkansas River, which would bring the American goods to the doors of the Spanish settlements. After Pike and one or two others had returned with reports of the country, the possibilities of this trade were clear to anyone with the merchant’s imagination.

There is a rivalry for the title of “Father of the Santa Fe Trail.” As early as 1812, when the United States was at war with England, a party of men on horseback trading into the West, commonly called the McKnight, Baird, and Chambers Party, made their way West to Santa Fe, New Mexico. There, however, they met with disaster. All their goods were confiscated and they themselves lay in Mexican jails for nine years. Eventually, the returning survivors of this party told their stories, and those stories, far from chilling, only inflamed the ardor of other adventurous traders. In 1821 more than one American trader reached Santa Fe; and, now that the Spanish yoke had been thrown off by the Mexicans, the goods, instead of being confiscated, were purchased eagerly.

It is to be remembered, of course, that trading of this sort to Mexico was not altogether a new thing. Sutlers of the old fur traders and trappers already had found the way to New Spain from the valley of the Platte River, south along the eastern edge of the Rocky Mountains, through Wyoming and Colorado. By some such route as that at least one trader, a French Creole, an agent of the firm of Bryant & Morrison at Kaskaskia, Illinois, had penetrated to the Spanish lands as early as 1804, while Lewis and Clark were still absent in the upper wilderness. Each year the great mountain rendezvous of the trappers — at Bent’s Fort on the Arkansas River, at Horse Creek in Wyoming, on the Green River in Utah, or even farther beyond the mountains — demanded supplies of food, traps, and ammunition to enable the hunters to continue their work for another year. Perhaps, many of the pack-trains which regularly supplied this shifting mountain market already had traded in the Spanish country.

It is not necessary to go into further details regarding this primitive commerce of the prairies. It yielded a certain profit; it shaped the character of the men who carried it on. But, what is yet more important, it greatly influenced the country which lay back of the border on the Missouri River. It called yet more men from the eastern settlements to those portions which lay upon the edge of the Great Plains. There crowded yet more thickly, up to the line between the certain and the uncertain, the restless westbound population of all the country.

If, on the south, the valley of the Arkansas River led outward to New Spain, yet other pathways made out from the Mississippi River into the unknown lands. The Missouri River was the first and last of our great natural frontier roads. Its lower course swept along the eastern edge of the Plains, far to the south, down to the very doors of the most adventurous settlements in the Mississippi Valley. Those who dared its stained and turbulent current had to push up, onward, northward, past the mouth of the Platte River, far to the north across degrees of latitude, steadily forward through a vast virgin land. Then, the river bent boldly and strongly off to the west, across another empire. Its great falls indicated that it headed high; beyond the great falls its steady sweep westward and at last southward, led into yet other kingdoms.