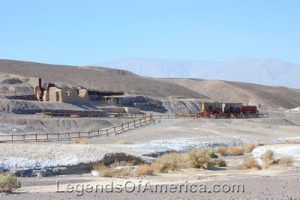 Harmony Borax Works (1881-1888) – The central feature in the opening of Death Valley and the subsequent popularity of the Furnace Creek area, the plant and associated townsite played an important role in Death Valley history. Borax was first discovered in Death Valley in 1881 by Aaron and Rose Winters, whose holdings were immediately bought by

William T. Coleman and Company for $20,000. He subsequently formed the Greenland Salt and Borax Mining Company, which in 1882, began operating as the Harmony Borax Works. A small settlement of adobe and stone buildings were built plus a refinery. When in full operation, the Harmony Borax Works employed 40 men who produced three tons of borax daily. During the summer months, when the weather was so hot that processing water would not cool enough to permit the suspended borax to crystallize, Coleman moved his work force to the Amargosa Borax Works near present-day Tecopa, California. Coleman also purchased the Greenland Ranch (later known as the Furnace Creek Ranch) immediately to the south, making it a supply point for his men and stock. There, he developed a virtual oasis from water that flowed from Furnace Creek.

Getting the finished product to market from the heart of Death Valley was a difficult task, and an efficient method had to be devised. The Harmony operation became famous through the use of large mule teams and double wagons which hauled borax over the long overland route. The romantic image of the “20 mule team” persists to this day and has become the symbol of the borax industry in this country.

The Harmony plant went out of operation in 1888, after only five years of production, when Coleman’s financial empire collapsed. Acquired by Francis Marion Smith, the works never resumed the boiling of cottonball borate ore, and in time became part of the borax reserves of the Pacific Coast Borax Company and it successors. On December 31, 1974, the site was placed on the National Register of Historic Places. Managed by Death Valley National Park, the site displays ruins of the old refinery, outbuildings, and a 20 mule teams borax wagon. It is located about a mile north of the Furnace Creek Visitor Center, in Death Valley along Highway 190. 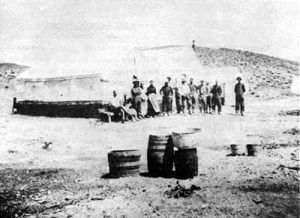 Harrisburg, California – This camp was formed after a free-gold discovery by Pete Aguereberry and Shorty Harris in the summer of 1905. Originally this town was called Harrisberry to capitalize on Shorty Harris’ fame. History is unsure as to whether the original find was made by Aguereberry or Harris, but, when Shorty retold the story, he called it Harrisburg, and the name stuck. Pete Aguereberry, one of the original strike finders, spent 40 years working his claims in the Eureka Mine. Primarily, it was a tent city that grew to support a population of about 300. Today, the area is dotted with mining remains and still sports Aguereberry’s old home and mine. There is nothing left of the townsite itself. Located in Death Valley National Park at an elevation of about 6,000 feet, the  remains are located about two miles down the dirt road to Aguereberry Point off of Highway 178.  More …. 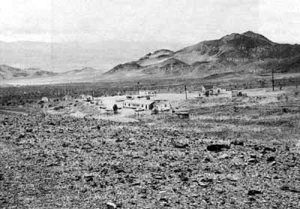 Ibex Springs, California – One of the most extensive ghost towns in Death Valley, this was first the site for a copper, silver, and gold mine discovered in 1881. In 1883, a stamp mill and smelter built to process the ores from the Ibex Mine. The mine; however, was played out by the turn of the century. However, in 1907 it resurged as a mining camp for silver mines. This was short-lived; however until talc was discovered in the 1930s. A man named John Moorehouse later filed 16 claims and started the Moorehouse Mine, which operated in the 1950s. The mine yielded almost 62,000 tons of talc before it played out in 1959.

Today, the vast majority of the camp remains date from the 1950s, which include numerous buildings and mining ruins. However, the ruins of the 1883 stamp mill and smelter can also be seen. The are is also laced with old Indian trails and more than two dozen ancient Indian “sleeping circles.” The old mining site is located 5.3 miles due west of CA-127, about two miles south of Ibex Pass. A four-wheel-drive vehicle is required. 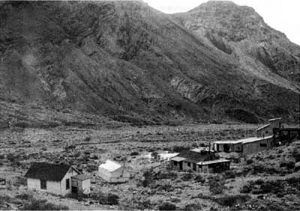 Inyo Mine, California – A gold mining operation established in 1905 in the Echo Mountain Mining District, it was short-lived, closing just two years later during the financial panic of 1907. However, the mine was revived in 1928 and operated until 1941. Today, the mine displays some of the most extensive remains in Death Valley National Park, which include several cabins and the ruins of the mill. It is located nine miles east of CA-190 on Echo Canyon Road.

Kasson, California – An early mining camp that was said to have been located about 12 miles northwest of the original site of Tecopa, this place was actually one of the many stock swindles that took place in the American West. Located in the Mineral Basin District, a man named Barton O’Dair had a claim called the Vulture, which he had opened with the financial help of Los Angeles investors, including attorney John S. Thompson. When they found the ore wasn’t going to pay, they decided to look for a buyer for the property. Finding interest in a Milwaukee man named Amasa C. Kasson, he, along with the help of original investor and attorney, John S. Thompson, organized the Gladstone Gold and Silver Mining Company in June 1879. Twelve million dollars in stock was soon advertised for sale, which called for large development including a 60-stamp mill and bullion production of nearly $2 million per year. A town called “Kasson” was developed on paper which included a post office. However, just a few months later, when Washington D.C. found out there was no one living there, they withdrew the post office authority in November 1879. Though Kasson appeared on maps for about ten years, a town never developed, but, there is evidence that a place called the “Gladstone Mine” existed. There was obviously some mining activity that took place here in the Ibex Wildnerness, because today, there are a few remains including several small stone buildings without roofs and a cave at the top of the hill that has a couple of entrances.

Keane Springs, California –  Located in northeast Death Valley, Keane Springs got its start during the Rhyolite boom in 1906 because of its good water source. This inspired a group of promoters to establish a townsite. Though it initially did well supporting the Keane Wonder and Chloride Cliff Mines, both operations established their own camps and the springs slowly declined back into a favorite watering whole and stopover for travelers. It was almost entirely wiped out by a flood in 1909. Today, its most prominent remains are the water tank,  the ruins of the pumping machinery, and a few low stone walls. To get to the site from Beatty, Nevada, travel west on NV-375 for 15.8 miles. Then turn left (East), and travel two miles to a road barrier on left. From here, it is a .75 mile hike down the barricaded road towards the a big willow tree. The townsite is in the wash below the spring.