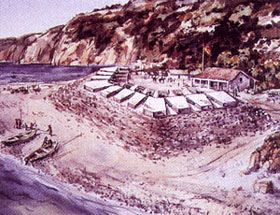 Fort Guijarros – San Diego’s first harbor defense was a thick-walled adobe fortress built about 1797 by the Spanish on what is now known as Ballast Point. Commanding the entrance to San Diego Bay, it had ten cannons mounted in gun emplacements that were were fired in action only twice, once in what was known as the “Battle of San Diego” between an American ship and Spanish soldiers. The second time, also against an American ship when the post was under Mexican control.

Though nothing remains of the original fort at the historic site today, two of its original guns can be seen at Fort Stockton and Old Town Plaza in San Diego. The Fort Guijarros Museum Foundation also engages in archeological digs and historical research in the history of Ballast Point. 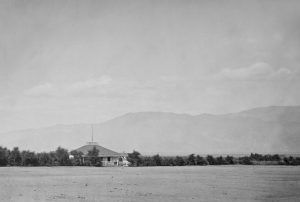 Fort Independence (1862-1877) – Initially called Camp Independence, the post was established on Oak Creek, three miles north of present-day Independence, California, on July 4, 1862, during the Owens Valley Indian War. It was abandoned when hostilities ended with the Owens Valley Paiute in December 1864. However, just a few months later, conflicts with the Paiute began again, and Nevada Volunteers reoccupied the fort in March 1865.

On July 5, 1877, the post was entirely abandoned and transferred to the Interior Department for disposition in 1884. When the military left the valley, the native people of the area held various allotments adjacent to the Fort and eventually assumed control of the land. The Fort Independence Reservation was officially established in 1915, providing Tribal members with 360 acres of land adjacent to Oak Creek. Today, the membership is about 140 members, approximately half of whom live on the reservation.

Fort Reading – One of the earliest forts in northern California, Fort Reading was established on May 26, 1852, as a two-company post situated in the above buildings. Named for Major Pierson B. Reading, paymaster of the California Volunteers during the Mexican-American War, and a pioneer settler in California, the post’s objective was to protect the mining district from Indian attacks. Though its life would be short-lived, it once included barracks, a guardhouse, officers’ quarters, a storehouse, a carpentry shop, a hospital, and several other buildings.  Often flooding during the rainy season, the troops were withdrawn in April 1856, but the army intermittently occupied the buildings until the site was abandoned entirely in April 1970. The buildings were then sold, and the land reverted to the public domain in 1881. Today, there is nothing left of the original site except a marker about 12 miles northeast of Redding, California.

Fort Rosecrans – The post was established by the U.S. Army in February 1852 as the Point Loma military reservation just 1 ½ miles north of Fort Guijarros on what is now called Ballast Point in San Diego. Two small tracts later were set aside for lighthouse purposes, one at Ballast Point, one at the tip of the reservation, and a third was reserved for the Quarantine Station near La Playa. In later years several American artillery units were positioned along the seacoast of Fort Rosecrans, which remained operational until 1945. After WWII, Fort Rosecrans was turned over to the U.S. Navy, which established a Submarine support base in the early 1950s at Ballast Point (Naval Base Point Loma), which is still active today. The stately two-story historic living quarters are still used by the Naval Base located at the end of Chatsworth Boulevard in San Diego, California. Abandoned cannon encasements can also still be seen. 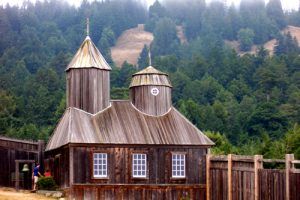 Fort Ross – Situated in Sonoma County, California, Fort Ross was established when the Russian-American Fur Company purchased 1,000 acres of coastal land for three blankets, two axes, three hoes, and an assortment of beads in 1812. For the next three decades, the Russian settlement supported fur posts in Alaska while also serving as a base for hunting sea otters. This fur company, chartered by Russia’s tsarist government, controlled all Russian exploration, trade, and settlement in the North Pacific and established permanent settlements in Alaska and California, of which Fort Ross was the southernmost settlement. California’s first windmills and shipbuilding, and Russian scientists were among the first to record California’s cultural and natural history. Captain John Sutter purchased the fort for $30,000. Today, the site is the Fort Ross California State Park and is designated as a National Historic Landmark. Most of the existing buildings on the site are reconstructions. The only original structure remaining is Rotchev House, the residence of the last manager. Several other structures have been recreated, including the stockade, the officers’ barracks, and the Russian-Orthodox chapel. A visitor center houses exhibits and displays on the rich cultural history of the site. It is located 12 miles north of Jenner, California.