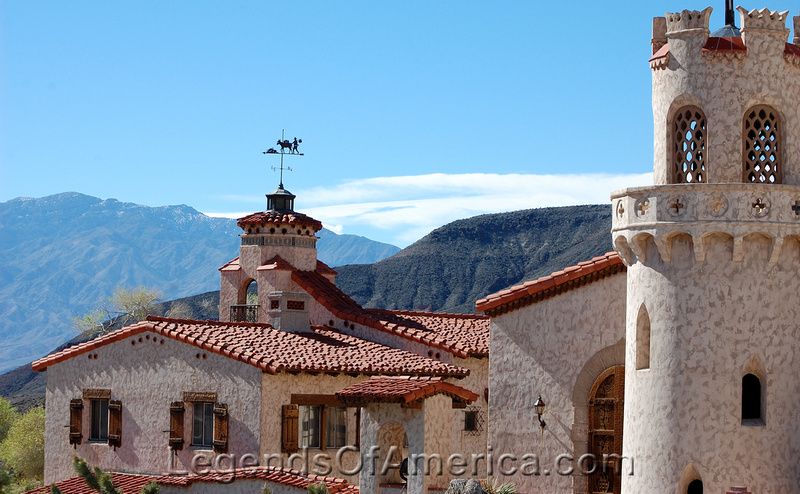 Moonlight anywhere is a delight. But, there’s no moonlight in the world that can compare with the moonlight in Grapevine Canyon, our desert canyon, where the Castle stands.

Hidden in the green oasis of Grapevine Canyon in far northern Death Valley, California, the Death Valley Ranch, or Scotty’s Castle, as it is more commonly known, is a window into the life and times of the Roaring ’20s and the Depression of the ’30s. It was and is an engineer’s dream home, a wealthy matron’s vacation home, and a man of mystery’s hideout and getaway.

(Editors note: The National Park Service shows Scotty’s Castle as “closed” until 2020 due to flood damage. See their website HERE) 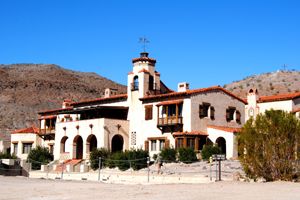 Walter Scott, better known as Death Valley Scotty, convinced everyone that he had built the castle with money from his rich secret mines in the area. However, Albert Mussey Johnson actually built the house as a vacation getaway for himself and his wife Bessie. Scotty was the mystery, the cowboy, and the entertainer, but he was also a friend. Albert was the brains and the money. Two men as different as night and day, from different worlds and with different visions – who shared a dream.

In 1904, Walter Scott was in Chicago, Illinois seeking backers for his legendary gold mines, when he conned millionaire businessman Albert Johnson to invest. Despite receiving no return on his investment, and even after the person he sent to the desert to check on Scott reported that there was no gold mine, Albert Johnson continued to invest in Scott. In 1906, Johnson himself went to California to visit him. Although he found nothing in the way of gold mines and endured Walter Scott’s great hoax now known as the “Battle” of Wingate Pass, the dry weather and outdoor life proved beneficial to his health.

Between 1906 and 1922 Johnson visited the area about a half dozen times. Scott always met Johnson upon his arrival and acted as his guide. The two men would camp in canvas tents and tour the barren desert wilderness of Death Valley by horseback. Albert’s visits were often as long as a month. 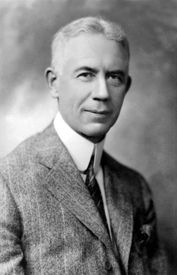 At first, his interests were primarily focused on the many mining claims he had either invested in or had simply heard about. At some point; however, his interest in the area became much more personal. His business life and the hard Chicago winters were exhausting and he often felt a desperate need for complete rest and change. A stay in the desert always proved tremendously beneficial for his health and relieved many of his various ailments caused by a railroad accident that had occurred in 1899.

Johnson began purchasing property in Grapevine Canyon in 1915. Within two years he had purchased several hundred acres, would purchase more over the years, and fulfill the requirements prescribed by the Desert Land Act of 1871 to acquire another 1200 acres. The Act required a minimum amount of irrigation and a certain degree of improvements to the land before it could be rightfully claimed. By 1929 Johnson’s developments and improvements of the 1200 acres in question were completed and his claim to the land secured. In the end, the land, totaling some 1,500 acres, comprised two separate parcels about eight miles apart, referred to as the Upper and Lower Ranches.

Albert’s wife, Bessie Johnson, would later write: “What had started as a business expedition to inspect some mining claims transformed into a regular seasonal vacation and ultimately into a ten-year building campaign. The subtle allures of the desert combined with the captivating companionship of the likable Walter Scott, known to the public as Death Valley Scotty, to persuade Albert to forsake the luxuries of a marble mansion on the shores of Lake Michigan.”

That alone does not fully explain what was, to say the least, such an eccentric decision. Most published accounts center on Johnson’s friendship and attachment to Walter Scott, as the central factor in his decision to locate here. No doubt that played an important part, for it was Scott that introduced Johnson to the area. Johnson had been one of several investors in a series of phony mining propositions Scott, a huckster and charlatan by trade, was habitually concocting. In 1906 Johnson made his first trip to Death Valley in order to inspect the mines Scott had convinced him existed. The state of Nevada and the entire region was then undergoing its last great mining boom because of the silver strikes in the Goldfield and Tonopah areas, neither of which were far from Death Valley. The two men traveled extensively together by mule and horseback investigating mines throughout the region, and it was not long after his first visit that Johnson realized the truth about Scott. 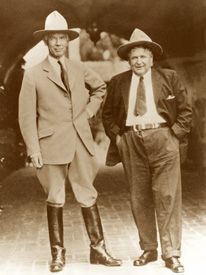 But, even after Johnson realized that Scott had lied and cheated him he continued to befriend him. Perhaps Johnson envisioned Scott as one of the last of the romantic figures engendered by the Wild West, or maybe Johnson was completely enraptured with the stories and tall tales Scott was so expert at telling. Despite a rather scurrilous reputation, Johnson felt that Scott “was absolutely reliable and I don’t know of any man in the world I would rather go on a camping trip with than Scott.” Although Scott’s involvement in all phases of construction was minimal, he was an almost permanent resident of the Ranch and always a welcome guest of the Johnsons.

To say that the two men were opposites is an understatement. Albert Johnson had been born into a wealthy family in Ohio. He was raised to be devoutly religious and never swore, smoked or drank liquor. After graduating from Cornell University with a degree in civil engineering he married Bessilyn Morris Penniman and went on to make his own fortune in the corporate world of finance and big business. In 1899, Johnson and his father were involved in a terrible train wreck. Johnson’s father was killed instantly and Albert’s back was broken. He was immobilized and bedridden for 18 months. Eventually, he recovered but was left permanently crippled.

Scott was born and raised on a working Kentucky horse farm. At the early age of eleven, Scott ran away from home to join his two brothers, employed as ranch hands in Humboldt Wells, Nevada. After working as a water boy for a survey team and running mules for the Harmony Borax Mines in Death Valley, Scotty worked for twelve years as a rough rider in the Buffalo Bill Wild West Show. He eventually moved back to Death Valley, established a camp near Grapevine Canyon, his favorite part of the valley, and adopted it as his home, whatever the basis for their relationship the two men continued to hike and camp together and Johnson could always count on Scott to meet him with horse and pack, ready to go.

Besides their abiding friendship, other factors played a role in Johnson’s decision to build a “Castle” in a countryside that most would have considered uninhabitable. The protection afforded from such an unpopulated land was something Johnson and his wife grew to appreciate and prize. She would later say: “We had traveled along through the sage, for three hours and had seen no one. Even to [this] day we often travel, on good roads, 150 miles and never see a soul or pass a car. This is one of the charms of the Desert, after fighting your way through city traffic. The peace of it is such a joy after the turmoil of life outside. The mountains are fortresses of protection.”