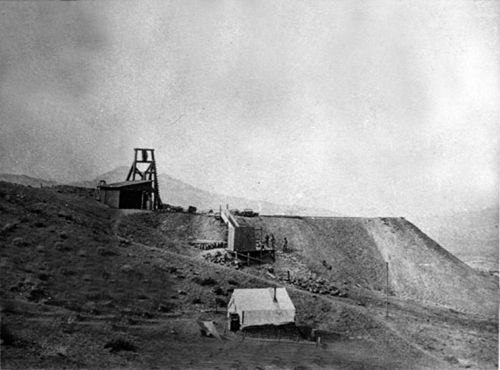 Part of the Greenwater District mining boom, one of the most spectacular in the history of Death Valley mining, several towns got their start in the district, including Furnace, Kunze, and Ramsey, which were later consolidated as Greenwater. Furnace was initially known as Clark’s Camp after Patrick “Patsy” Clark, a well-known copper mining operator from Spokane, Washington.

As the great rush to the Bullfrog Hills soon filled up the ground in that vicinity, and late-arriving prospectors were forced to move farther afield. Two such men, Fred Birney and Phil Creasor, ambled south down the east side of the Black Mountain Range, and in February 1905, while looking for gold, instead uncovered rich surface croppings of an immense copper belt in Greenwater Valley.

Birney and Creasor sent samples of their find to Patsy Clark, who was sufficiently impressed to buy the claims from the two men in May. Clark soon formed the Furnace Creek Copper Company and by June, he had an operating mine with eight men working a 35-foot deep shaft.

The first major operator in the district, he hoped to reap a quick fortune by finding the immense underground copper deposits from which came the rich surface croppings.

Though the copper lode had not been found by March 1906, Clark decided that the mine warranted permanent and extensive exploration and development, incorporated his mine, and sold stock. Formed with capital stock of $1,250,000, shares were put on the market at 50¢ each, one half of their par value. Clark offered 125,000 of these shares to the general public and within three hours every share had been sold. As the mine expanded operations, the camp that formed around the mine grew.  In July 1906, the Greenwater Mining District was officially formed and a post office was established in Clark’s Camp, as well as at nearby Greenwater. 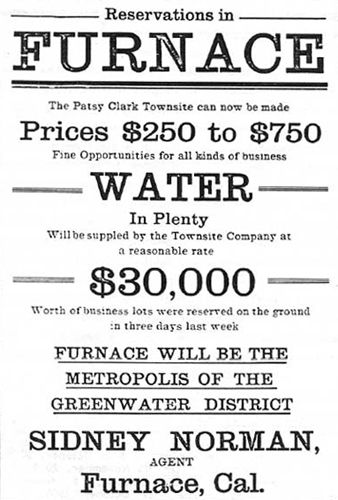 Never intended to be more than a convenient camp for the miners working at Clark’s Furnace Creek Copper Company mines, as the other settlements sprang up in the immediate area, Clark also entered the townsite business, almost as an afterthought, due more to public pressure than desire. Since supplies and accommodations throughout the district were in such shortage at the peak of the boom, miners and prospectors naturally flocked towards Clark’s Camp, where stores had been established to cater to the needs of the miners he employed. Clark soon realized that the only way to control his camp, in the face of the unwanted crowds, was to organize a townsite, whether he wanted one or not. He officially entered the townsite battle in October and by December, advertisements were printed in the Rhyolite newspapers, advertising lots for sale from between $250 and $750 apiece. The ads also proclaimed that the new town of Furnace would be the metropolis of the Greenwater District.

In February, the Death Valley Chuck-Walla put the population of the Greenwater District at 2,000, including 500 in the town of Furnace, which was beginning to emerge as a real rival to the new Greenwater townsite. Soon, both towns were described as being very alive and bustling, with both having hotels, lodging houses, saloons, feed corrals, freight companies, meat markets, auto lines, brokerage houses, attorneys, newspapers, and more. In addition, three railroad lines had been surveyed into the district, the Ash Meadows Water Company was working on getting water piped into the district, and an electric light system was projected for the towns.

Despite the huge capital invested in the competing townsites, by early 1908, the anticipated large copper lode had still not been found and most of the smaller operations had ceased to exist. As the population fell, the Furnace post office closed in February. The only hope for the Greenwater District lay in the two big mines which were still operating — Patsy Clark’s Furnace Creek Copper Company in Furnace, and Charles Schwab’s Greenwater Death Valley Copper Company. Both operations were continuing to go to great depths to find the ore bodies, sinking below the 500-foot level. By March 1909, Patsy Clark finally gave up and ceased work on the mine at Furnace. Throughout the summer, only the Greenwater Death Valley Copper Company continued to work, and it too quit in September. Both companies would allow their properties to go to Inyo County for back property taxes. 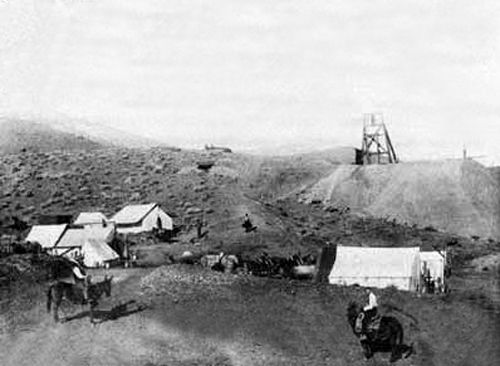 Most of the buildings in the area were readily movable and most were hauled away by their owners. What was left was taken by R. J. Fairbanks, the last merchant of Greenwater, and hauled to Shoshone, where he started a small store which later grew into a thriving desert oasis.

Mining was never again revived in the Greenwater District, and by 1917 all that a visitor could find was one deserted cabin. The site of the old town has no remains today. It was located 6.5 miles north-northwest of Funeral Peak, in the Funeral Mountains.

Compiled and edited by Kathy Weiser/Legends of America, updated May 2019.