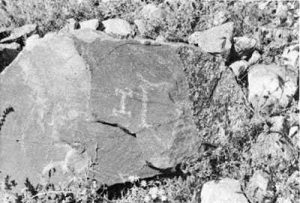 Arrastre Spring was an important part of the Death Valley, California mining activities in the late 1800s.

Situated within the Gold Hill Mining District, this site is better known today for its historic petroglyphs than for its mining activity. Located on the Eastern slope of the Panamint Mountains overlooking the inhospitable salt flats of Death Valley, Native Americans obviously spent some time in this high elevation, years before mining was ever considered.

In the 1890s, Arrastre Spring was the scene of some activity, for Indians working in the mines at Gold Hill were reportedly carrying the ore by burros the  2.5 to 3 miles to the arrastra at the spring for reduction. When Louise Grantham and associates took over ownership of the Taylor, Treasure, and Gold Hill mining claims on Gold Hill, it included the patented Taylor Mill site at Arrastre Spring.

Exactly how long a period of activity might have been involved here is unknown, although newspaper reports indicate that by the early 1900s enough mining was being pursued in the area that one arrastra would not suffice to process all the ore found. On the other hand, no other mill or reduction plant is mentioned in the area until Mrs. Grantham built the ore-processing plant at Warm Spring around 1937 to treat ore from her Gold Hill Mine.

At an elevation of 6,000 feet, the spring is reached via a steep, rough road branching to the northwest about ¼ mile north of the junction of the Gold Hill and Butte Valley Roads. This road ends on a slope below the spring, requiring a walk of about one-half mile to reach the willow grove in which the spring is located. Somewhere in the general vicinity of the spring was the Taylor Mill site, but its exact location is unknown.

A trek to the spring will provide glimpses of hundreds of prehistoric petroglyphs on boulders around the spring, extended about 1/8th of a mile above and below the spring. Most of the petroglyphs are simple, including lines, circles, and zigzag lines, but others represent stick figures and animals.