In Owens Valley on the east side of the Sierra Nevada Range, desert steamers once served the silver mining boom of the 1870s. This curious maritime history began in 1872 when the first steamboat was christened on the saline waters of Owens Lake. The pioneer steamer, the Bessie Brady, proudly proclaimed to be “The Pioneer inland steamer of the Pacific Coast.” Though this was untrue, as steamers had already been used in Lake Tahoe in 1864, in Meadow Lake in 1866, and in Donner Lake a few years later, the sight of a steamboat in the midst of Death Valley must have been a strange sight.

The idea was conceived by James Brady, superintendent of the Owens Lake Silver-Lead Company’s smelting furnaces on the lake’s eastern shore. Its purpose was to haul the silver bullion from the furnaces to wait for wagon teams at the foot of the lake.

A unique pioneer, the Bessie Brady was followed by a handful of other steamers over the next several years, discontinuing the need for the many teams that once plodded through the deep sand around the lake.

Though the steamers effectively hauled the ore, ironically, they caused another problem, as the bullion shipped across the lake began to pile up at the foot of the lake because the teamsters hauling it away couldn’t keep up. During these years, the ore surplus became so great; it forced the mines to cut back production and the steamers to be docked.

Finally, a new freighting company bought out the smaller ones in the area and placed fifty-six teams on the road south, dramatically improving the bullion shipments. Highly successful, the new freighting company continued to operate until 1876, when the Southern Pacific Railroad was completed through to the Mojave Desert, becoming the southern terminus of the freight lines and reducing the freighting distance by over one hundred miles.

Another enterprising man, Colonel Sherman Vanderventer Stevens, owned a sawmill that supplied the mines and smelters around the lake. Stevens soon built his own steamer to handle his thriving lumber business. Though smaller than the Bessie Brady, the craft had a more powerful engine and was launched in May 1877. However, within just a few days of her maiden voyage, a heavy wind storm swamped the new steamer, sinking her to the bottom of the lake. But Steven’s steamer was not lost as he immediately called for help and, with Bessie Brady’s aid, raised the boat. Refitted, the steamer was christened the Mollie Stevens in honor of the Colonel’s daughter, and she made her first voyage across the lake in early June. 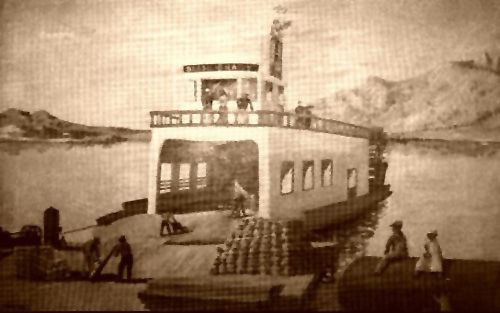 The Bessie Brady steamship, a painting by William McKeever, is on display at the Independence Museum. Photo courtesy Owens Valley History.

However, mining activity around the lake began declining, and the Mollie Stevens utility was short-lived. Within a year, she was making only occasional trips across the lake by the end of 1878; the boat spent most of its time idly moored. The Bessie Brady continued on about a year longer before she too, was hauled ashore at Ferguson’s Landing and her machinery removed.  The success of the steamers appeared to be ending until, in the winter of 1879, a man named Captain Julius M. Keeler arrived in Owens Valley. As an agent for several eastern capitalists, Keeler began the Owens Lake Mining and Milling Company, which laid out a town and mill sites in March 1880 near the Cerro Gordo Landing at the foot of the “yellow grade” from the Cerro Gordo mines. Later, the landing was renamed for the captain, and the town is called Keeler.

To obtain construction materials more economically, the company purchased Stevens’ sawmill property, including the Mollie Stevens, and put her back to work. The mill was completed in the spring of 1881, producing a much higher refined ore than was previously seen, making it much easier to transport. The mill soon produced about $6,000 bullion a week, with the Mollie Stevens hauling the silver across the lake. However, the Stevens steamer was not as efficient as hoped for, and in the spring of 1882, the Bessie Brady refitted with the engines from the smaller steamer. As the work was nearly complete on May 11, 1882, the oakum, oil, paint, and tar spontaneously ignited and the Bessie Brady was instantly a blazing inferno. The steamer was quickly consumed before the fire could be extinguished, spelling the end of the steamboat era on Owens Lake. Later that year, the railroad tracks entered the valley’s north end.

Though the steamers were gone, a treasure legend began to circulate almost immediately, telling of some $200,000 in gold bullion that had been lost on either the Mollie Stevens on her maiden voyage or the Bessie Brady when she “died” in the blaze.

Though it seems unlikely that the Mollie Stevens would have been carrying cargo on her maiden voyage or that the Bessie Brady was laden with gold before she was entirely refitted, the legend persists.

One other incident, which is not supported by any documentation, was the alleged loss of a wagon load of bullion carried on one of the steamers before their demise. The tale, originated by a man who said he heard it from the captain of the boat, contends that the steamer was carrying two wagons loaded with bullion when one slipped off into the lake. Allegedly, when a high wind hit the bullion-filled wagon, not sufficiently chained to the deck, the wagon was swept into the lake. The tale continues that while the wagon and some of the gold were recovered, a good amount remained in the depths of the water. 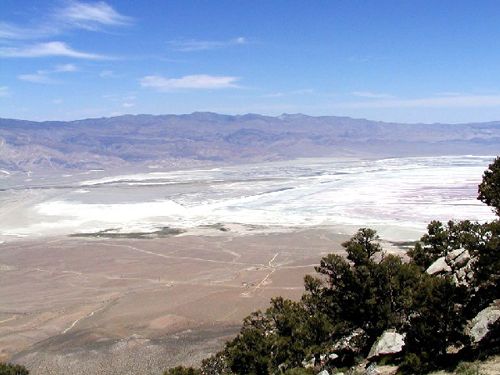 Today, Owens Lake is nothing more than a sterile sandy basin nestled in Owens Valley between Death Valley National Park and Sequoia National Park. The lake, lying at the end of the Owens River for eons, was about 23-50 feet deep and covered over 100 square miles during the late 1800s. However, during the early 20th century, the City of Los Angeles began diverting water from the Owens River and runoff from the Sierra Nevada mountain range. In 1913, the Los Angeles Aqueduct was completed, dramatically draining the blue salt lake. By 1926, Owens Lake was completely dry, and today the 110 square-mile lake bed is one of the nation’s dustiest places. Owens Lake is located in Inyo County, California.

Though it is debated whether there is gold hidden beneath the sandy depths of Owens Lake, there is no doubt that other treasures may very well lie in waiting. Such was the case when a 300-pound ship propeller and a 400-pound hand-wrought iron anchor were found.

The Rise and Fall of Cerro Gordo