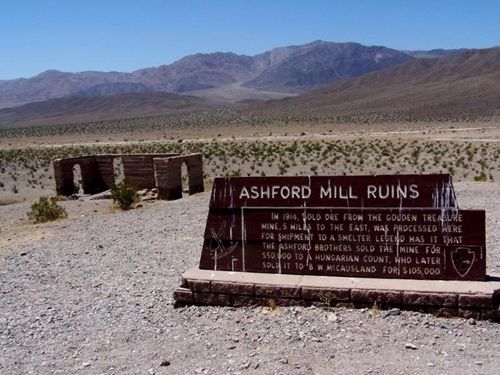 In January 1907, Harold Ashford wandered into the Death Valley region and, attracted by the gold strikes at the Desert Hound Mine, prospected in that vicinity. Within a few months, he discovered that the Keys Gold Mining Company had failed to do the necessary assessment work on several of its claims, and Ashford relocated them and started to work on his own. It took the Keys Gold Mining Company almost two years to discover that someone else was working their former claims. When Ashford refused to vacate, the company took him to court In January 1910; however, the judge found in favor of Ashford, and he retained title to his claims. He might have been better off if he had lost.

Harold Ashford and his brothers, Henry and Lewis, worked the mine off and on between 1910 and 1914, without good results. In November 1914, they leased the mine to B. W. McCausland and his son, Ross. 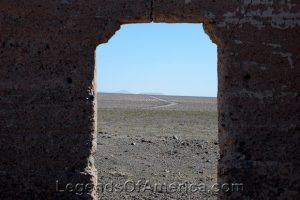 The highway stretches off in the distance through a window at the ruins of Ashford Mill. Photo by Dave Alexander.

The McCauslands started to work on a large scale, and within a year, had driven a tunnel 180 feet into the side of the mountain. At the height of their operation, the McCauslands employed 28 men, had invested over $125,000 in capital improvements, and had completed 2,000 feet of total workings. In addition, a mill had been built on the floor of Death Valley, five miles and 3,500 feet below the mine, where the ore from the mine was trucked for preliminary treating. The mill included a jaw-crusher, a ten-foot Lane mill, a Wilfley table, and a Diester slime table. The Inyo Register described the McCauslands as being wealthy residents of Los Angeles. In late August, they announced that their 40-ton capacity mill was in operation, and they had plans to increase its capacity to 150 tons.

However, despite taking out an estimated $100,000 worth of ore, the McCauslands soon discovered that the ores from the mine were not rich enough to justify their capital expenditures, and they ceased operations in September 1915. The McCauslands didn’t pay the Ashfords for the year’s lease on the mine to cut their losses. Though the Ashfords took them to court, they never received payment. 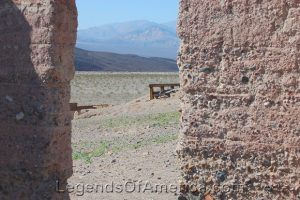 The mine and mill then set idle for more than a decade until 1926, when four men worked the mine, but it soon closed down again. The mine was leased again by the Ashfords in 1935 to Golden Treasure Mines, Inc. The new company reopened the mine but, minding the old mill inadequate to treat its ores, shipped their rock out to Shoshone, loaded upon the Tonopah & Tidewater Railroad. However, the long truck hauls proved very expensive, and after searching for other ways to reduce costs, the company settled down to taking out only the highest grade of ore available. They continued to work on the mine until 1938, when they gave up. Total shipments by the Golden Treasure company amounted to no more than $18,000 during their tenure.

Following the departure of their lessees, the Ashfords again began working the mine and, in August 1938, made a 38-ton shipment. By this time, the mine comprised twenty-six claims and had a 320-foot shaft with a crosscut, a 215-foot tunnel, and a 200-foot drift. Equipment at the site included a portable Ingersoll-Rand compressor and various camp buildings. Three men were working, probably the three Ashford brothers.

After working the mine themselves for a short period, the Ashford’s leased it again, this time to the Bernard Granville and Associates of Los Angeles. That company immediately went to work, employing ten men, and soon installed a short aerial tramway to facilitate the task of consolidating the ore from the scattered shafts and tunnels to one central point for trucking down the mountain. Operations continued until sometime in 1941, when the new lessees gave up. No record of any shipments being made by Granville and Associates can be found. 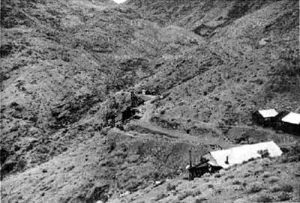 The Ashford Mine, Death Valley, California

The Ashfords continued to hold title to their mine following the departure of their last lessees, although they never returned to work it themselves. In perhaps the best summary of the spotted history of the Ashford Mine, C. B. Glasscock wrote that it was able to produce just enough gold to keep the Ashfords in groceries and lawsuits for more than a third of a century.

Today, several structures stand at the Ashford Mine, although not many of them could be classified as historic. The main mine site is situated high on the west side of the Black Mountains, overlooking Death Valley, and the old road to the site has been washed out for many years. Access is only possible via an arduous hike about one mile from the end of the road up to the mine site. Structures at the main complex consist of a collapsed shack, an outhouse, a large office and cookhouse building, two wooden bunkhouses, a tin shed, a head frame and ore bin, and the tramway towers and terminal. All of these structures date from the 1930-1940 period of mining.

Around the knoll from the main mining site–towards the east–are the ruins of an older mining effort, undoubtedly the remnants of the McCausland’s work in 1914-15. Here may be found several older adits and dumps, the ruins of a collapsed shack and half a dozen level sites, the former homes of a small tent community. This site has better integrity than the former since it was relatively undisturbed in later mining years but still does not possess historical significance. 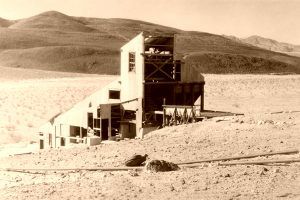 The ruins of Ashford Mill stand on the floor of Death Valley. Structures here consist of the crumbling walls of a concrete office building and the ruins of the mill itself. Not much is left of the mill, except for the large concrete foundations and minimal debris. The ruins of the mill foundation and the office building are rather interesting. According to local legend, a double load of cement was shipped to the McCauslands when construction was completed. Rather than send it back, which would have entailed further transportation expenses, the extra cement was used to construct the mill and office building, which largely accounts for their still standing today.

Ashford Mills is located about 29 miles west of Shoshone, California, on CA-178. From the mill to the mine, visitors will travel east on Ashford Canyon Road for three miles and then hike about 1.25 miles up Ashford Canyon to the mine site. Following the remnants of the old road up the Canyon will make for an easier hike. 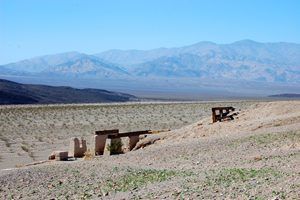