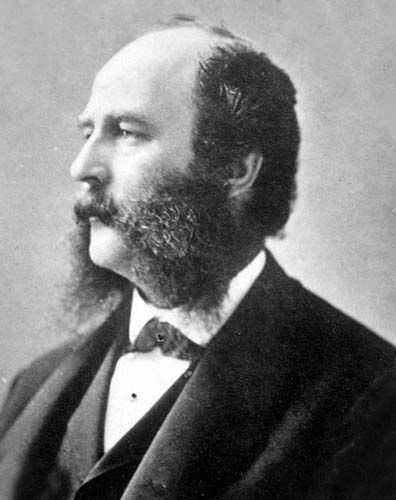 William Tell Coleman was a shipping magnate, politician, and borax producer, Coleman was born in  Cynthiana, Kentucky on February 29, 1824. His mother died when he was eight and his father the next year. He then lived with an aunt until he was 16 years old.

He next made his way to St. Louis, Missouri where he worked in a lumber company before attending St. Louis University. After completing the four-year legal course, he acted as a plantation overseer in Louisiana for a while before working for his former lumber employers looking after timber tracts and sawmills in Wisconsin.

With the California Gold Rush, he and his brother joined the flood of people heading westward and the two became involved in the mercantile business in Sacramento and Placerville, California. Later, his brother went to Oregon and William settled in San Francisco, where he started the merchandising firm of William T. Coleman & Company, which he built into the largest commission business in the city.

Coleman was a leading figure in both the 1851 and  1856 Vigilante Committees of San Francisco, which attempted to establish law and order in the lawless city. In 1856, he also established a steamship line between New York and San Francisco. The next year, he moved to New York to manage the business.

In the early 1870’s he returned to California with his family and erected a white Roman villa on Nob Hill in San Francisco as well as a spacious country home in San Mateo County. In 1877 the Great Railroad Strike started anti-Asian riots in the west and after protestors tried to burn the docks of the Pacific Mail Steamship Company, thought to be the largest importer of Chinese laborers, business owners organized a Committee of Public Safety with Coleman as president. Acting as a supplementary force to the city police, they were armed only with pick handles and within a few days, order was restored and the committee was disbanded.

But, his last venture into the borax mining industry, while initially very successful allowing him to corner the industry, would prove to be his ruin in the end. In the early 1880s, Coleman began to invest heavily in the booming borax mines in Death Valley. 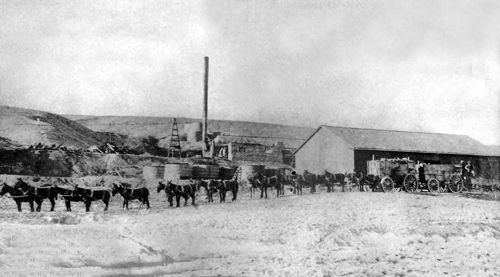 Borax was first discovered in Death Valley in 1881 by Aaron and Rose Winters, whose holdings were immediately bought by Coleman and for $20,000. He subsequently formed the Greenland Salt and Borax Mining Company, which in 1882, began operating as the  Harmony Borax Works. That same year, he also discovered hydrous calcium borate in Death Valley. It was named colemanite for its discoverer.

Coleman also purchased the 40-acre Greenland Ranch (later known as the Furnace Creek Ranch) immediately to the south, making it a supply point for his men and stock. There, he developed a virtual oasis from water that flowed from Furnace Creek.

Getting the finished product to market from the heart of Death Valley was a difficult task, and an efficient method had to be devised. The  Harmony operation became famous through the use of large mule teams and double wagons which hauled borax over the long overland route. The romantic image of the “20 mule team” soon became the symbol of borax in this country. 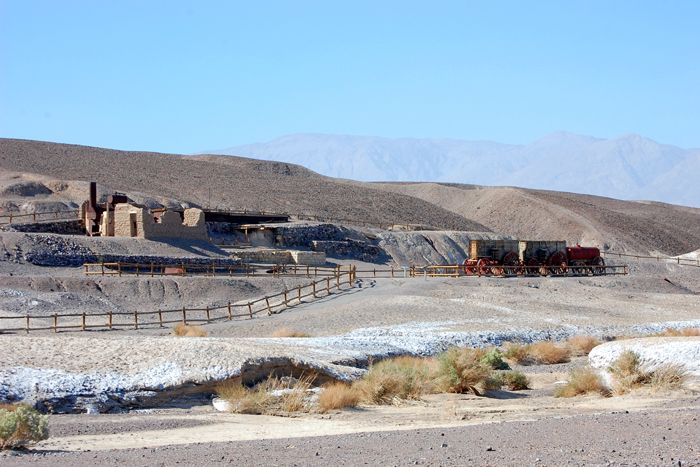 Coleman continued to buy more and more borax properties in Death Valley, to such an extent that he cornered the borax market and in the end, overproduced, causing the price of borax to fall. At about the same time, in 1887, he also became interested in the profitable raisin market, which he also tried to corner. In the end, he suffered a large financial shortfall totaling in the millions of dollars. He first attempted to sell off some of his borax operations to minimize his losses but was unsuccessful. He was ultimately forced to mortgage them to Francis M. “Borax” Smith and lost them in 1890.

Coleman’s economic kingdom, which had an estimated business of $14 million a year, totally collapsed. He was only able to pay off his creditors a year before his death in San Francisco in 1893.

The ruins of Coleman’s Harmony Borax Works were placed on the National Register of Historic Places on December 31, 1974. They are part of the National Park Service historical site preservation program in Death Valley National Park.